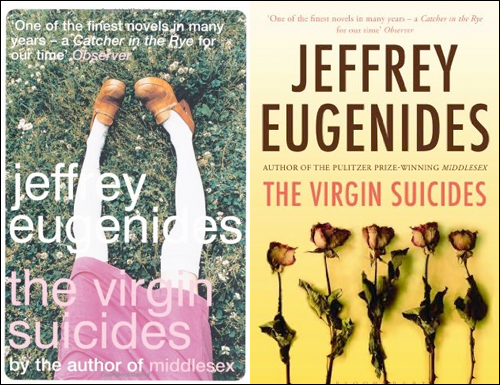 First published in 1993, The Virgin Suicides announced the arrival of a major new American novelist. In a quiet suburb of Detroit, the five Lisbon sisters — beautiful, eccentric, and obsessively watched by the neighborhood boys–commit suicide one by one over the course of a single year. As the boys observe them from afar, transfixed, they piece together the mystery of the family’s fatal melancholy, in this hypnotic and unforgettable novel of adolescent love, disquiet, and death. Jeffrey Eugenides evokes the emotions of youth with haunting sensitivity and dark humor and creates a coming-of-age story unlike any of our time. Adapted into a critically acclaimed film by Sofia Coppola, The Virgin Suicides is a modern classic, a lyrical and timeless tale of sex and suicide that transforms and mythologizes suburban middle-American life.

I finally found the time to reread this amazing book! And if you’re reading this review but haven’t read the book, hurry up and buy it. It’s beautifully written and incredibly insightful. I still can’t believe it’s been almost 25 years since it was first published. Jeffrey Eugenides understood school-aged children even back then.

This book doesn’t say more than it does say. You really have to read between the lines to understand the meaning of this story. It emphasises to the reader that suicide – and more specifically suicide pacts – don’t make sense. They affect many people, not just those involved, and the mental spiral into depression can be clear from the outside, if you’re close enough to see it. The boys in the story watched the girls very closely, and they note the restricted nature of the Lisbon mother. And the deterioration of the Lisbon house highlights how the Lisbon girls are mentally deteriorating themselves.

This book is told from the POV of a group of boys who live across the street from the Lisbon girls. All the girls kill themselves within the same year, and these boys are transfixed by the girls. The greatest stylistic element to this story is that you never fully understand the girls. You never know what they’re thinking or feeling – you only get glimpses of their world from notes or messages that they leave for other people.

The boys ask other people about their experiences with the girls, so everything feels very distanced. And because of that, you still don’t understand why the girls killed themselves. You can sit there and reread the book, but Eugenides has left out so much about the girls that they remain mysterious. And their youth transcends time until the boys are all much older and they’re still obsessing about the girls. They’re still trying to understand why the girls reached out to the boys and what they thought, and yet the reader knows that those boys will never find that out.

This book is brilliant. I recommend it to everyone.