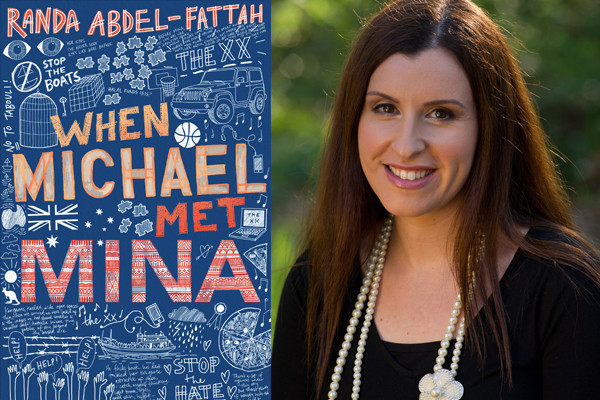 What a refreshingly unique, insightful and beautiful book. I really enjoyed reading this novel and thought Randa Abdel-Fatha did such a fantastic job of making these characters so realistic and so rich with emotion.

When Michael Met Mina is a young adult novel that explores race, religion, family, class, multiculturalism and identity. It delves into the refugee policy in Australia, which feels very timely and relevant. The treatment of refugees and asylum seekers is a constant point of conversation at the moment, and When Michael Met Mina does a marvellous job of grounding that discussion and allowing the reader to really consider all opinions.

Mina is a young refugee whose family came to Australia by boat as refugees from Afghanistan. They settled into the Western Sydney suburb of Auburn and then suddenly moved to the affluent North Shore when Mina received a scholarship to an elite private school. And there, the family are subjected into a world where casual racism is the norm.

Michael’s parents founded a new political party called ‘Aussie Values’ – aimed at stopping the boats – and without realising it, Michael has absorbed their anti-immigration stance. He has grown up following in his parents’ footsteps and adopting their beliefs. And then Michael meets Mina on the opposing side of a refugee rally. And his attraction builds.

“Before Mina, my life was like a completed jigsaw puzzle but Mina has pushed the puzzle onto the floor. I have to start all over again, figuring out where the pieces go.”

As Michael starts to fall for Mina, he starts to question his parents’ beliefs. He starts to disagree with his friends when they make fun of Mina and the reader witnesses him evolving and maturing and growing aware of what it means to be a refugee in Australia.

The characters in this book are complex but beautiful. Their obstacles are realistic of Australians today and the naivety of some of the characters can be seen in many young people today. Mina’s experiences are not unique – many refugees in Australia have experienced what she has. And she’s a sweet, compassionate character who isn’t afraid to stand up for herself. She isn’t afraid to be confident about her place in Australia.

“There’s a lot of ugliness under this sky. But there’s plenty of beauty here too. I want to find it, spread it around, all over the cruelty and injustice. I want to shake this world like a can of lemonade, pop the lid and watch the bubbles explode”

Randa is a wonderful writer. Her prose is evocative and descriptive and the dialogue reflects teenagers today. The social dynamic between the characters is brilliant and the progression of the story keeps the reader engaged and interested in how the story will end.

I really loved this book and can’t recommend it enough. You don’t need to love young adult fiction to love this novel. It’s an enlightening, relatable and highly relevant novel to read at this time in Australian history.