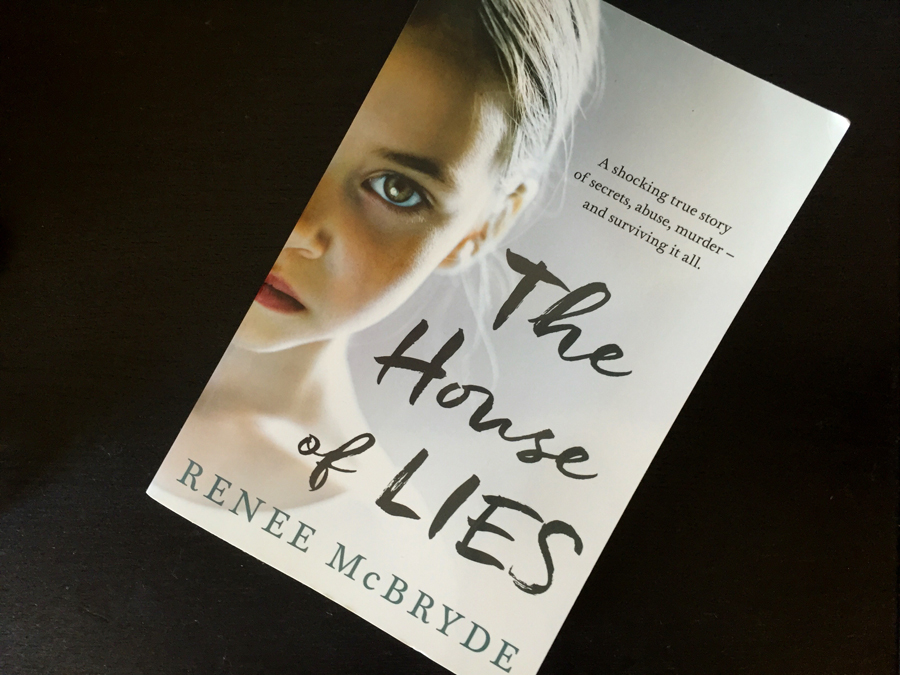 Renee McBryde grew up in Sydney with her single mother and her grandparents, and when she was very little found out that her father was actually in prison for double murder. And despite what he told Renee, he didn’t kill those two men in self-defence.

The House of Lies is the compelling true story of Renee’s life, up until she’s in her early twenties. Finding out that her father didn’t work on a cordial farm and was, in fact, in prison had a huge effect on the rest of her life. She grew up believing that as the daughter of a double murderer, she didn’t deserve much in the way of happiness – so instead she found misery at home and in her relationships.

“Darling, it really is time for you to know that I don’t really live on the Cottee’s farm, or work for Cottee’s Cordial…I live in a place called jail.”

This memoir is a slow-build, harrowing story. Renee’s revelation about her father is a catalyst for a lot of decisions she makes later in her life. She always clashes with her mother, who gave birth to Renee when she was just 16. The reader starts to realise the shame and embarrassment Renee feels for her family’s situaton, and how this manifests in her life. She can’t tell anyone about her father, but she desperately wants to. She gets bullied at school, goes through periods of obesity and then anorexia, and her mother goes through a string of failed relationships that Renee feels separate from.

“I didn’t need to know every detail about what had happened. But when it came to the idea of having a father I just couldn’t let it go. I started to doubt myself. Maybe I had been too judgemental of my father, too immature about decisions and situations I could never understand. Maybe if I was more open-minded there could still be way for me to build something with him.”

Renee doubts herself a lot in the early years of her life, feeling like she doesn’t deserve the best and that she is being punished whenever something goes wrong. She suffers a painful assault during her university years, and then spends years in an abusive relationship. She believes it’s her own fault that her boyfriend Ben is beating her, and these chapters really highlight was it’s like for a victim of domestic violence. For someone who’s never experienced it, those chapters were eye-opening. The guilt and the shame of that relationship, and the subsequent courage that it takes to leave that kind of relationship is overwhelming to read and really illustrates to the reader the kind of person Renee is.

“When things were good with Ben, I could clearly picture how our life would roll out together: the house, the children; all the things we had talked about. But when it was bad, I wondered how I was ever going to get out.”

Renee’s memoir is a reflection on a time from long ago. She now lives in Alice Springs, is married, and has three kids. The House of Lies really only delves into her life until Renee’s early to mid 20s, however it does feel like the difficult childhood and teenage years that she had were the worst of it, and she used the experiences to set herself on a much healthier path, both physically and mentally.

At times, this memoir is hard to read. But, it’s also inspiring and courageous and brave. I really loved reading it.