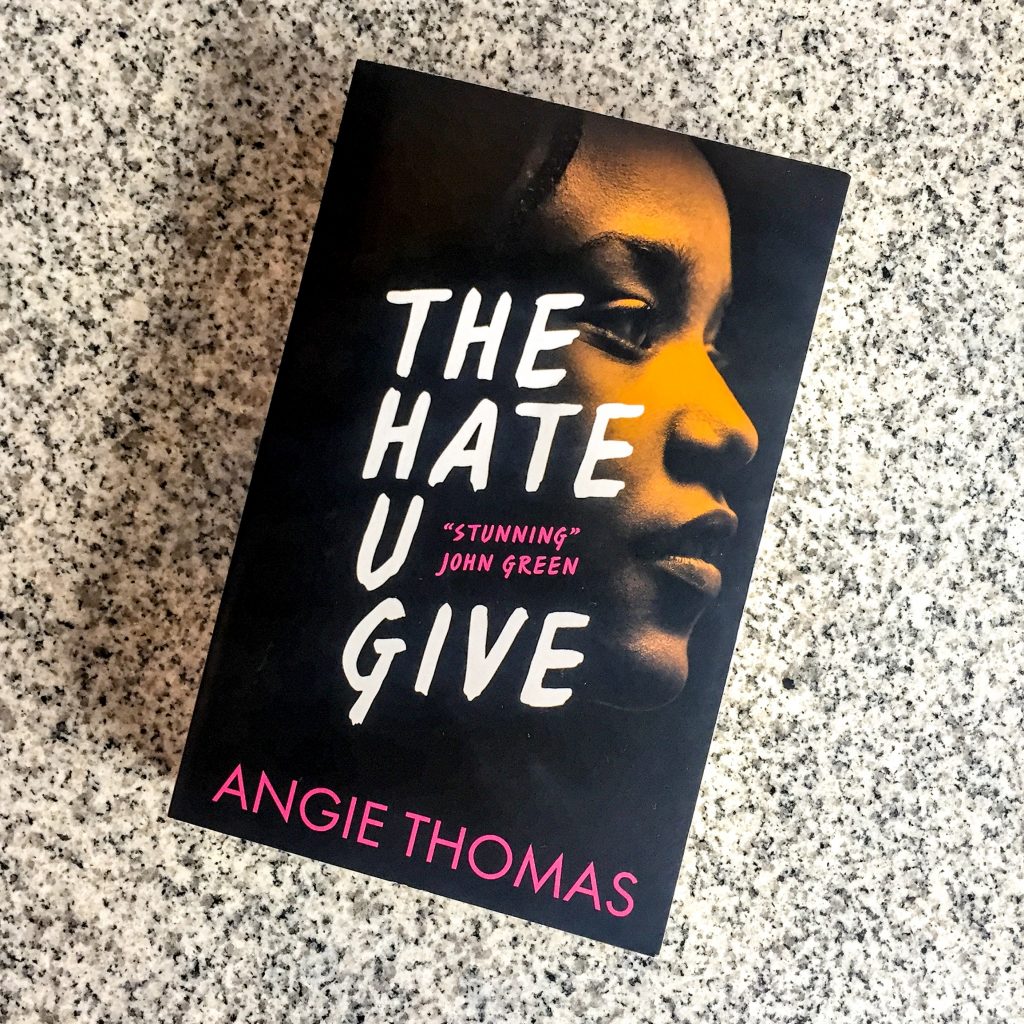 Inspired by the Black Lives Matter movement, The Hate U Give is about sixteen-year-old Starr who lives in the ghetto of Garden Heights and is the sole witness to the fatal shooting of her unarmed best friend, Khalil, by a police officer.

“I remember something else Daddy said. If you’re with somebody, you better hope they don’t have nothing on them, or both of y’all going down.”

The novel is set in two different worlds: Garden Heights, where Starr and her family live, and Williamson, Starr’s privileged, posh high school. She acts differently in each location and we learn that she doesn’t really feel like she belongs at the school. Her friends and her boyfriend are wealthy and very privileged and she feels out of place. They don’t understand her world. They don’t understand what it’s like to grow up in the ghetto with hardly any money and to work in your father’s store every weekend to earn some money. Her boyfriend, Chris, is sweet and means well, but at times is so caught up in his own Williamson world that he doesn’t understand how different he and Starr actually are.

For me, there were three dominant themes in the book: racism, family, and identity.

The Hate U Give is powerful, necessary, shocking but also really eye-opening. It shines a light on what prejudice is like in the 21st century. The book may be fictional, but this storyline has happened many times in real life: a black kid is unarmed, innocent, and is shot dead by a white policeman.

The cop believes (or claims to believe) that the kid was armed, but he wasn’t. And so begins a court case to determine who is telling the truth. This is such a topical issue at the moment, and Angie Thomas has highlighted how racism can be overlooked and how assumptions can be made that undermine people of colour.

“When I was twelve, my parents had two talks with me. One was the usual birds and bees. The other talk was about what to do if a cop stopped me.
“Starr-Starr, you do whatever they tell you to do,” he said. “Keep your hands visible. Don’t make any sudden moves. Only speak when they speak to you.”
I hope somebody had the talk with Khalil.”

Starr is afraid to tell the truth. She was in the car with Khalil when he was shot, and she’s the only witness. But the police don’t believe her story, and the media are painting Khalil to be a drug dealer who deserved to be shot. The cop’s family are being interviewed on the TV, acting innocent and worthy of sympathy. Starr doesn’t know what to do, and the reader grows increasingly frustrated and angry at the racism towards Starr and her family.

“Get a good look at the cop’s face. If you can remember his badge number, that’s even better.”

This story may be fiction, but it represents very real racism in society today.

What a beautiful, beautiful family that Starr has. Her parents are compassionate, caring, supportive and they’re very present in her life. Unlike a lot of young adult fiction, Starr’s parents are in most scenes in the book. They help her deal with the loss of Khalil and they encourage her when she decides to speak to the police about what happened.

“Momma squeezes my hand. “Breathe”
I didn’t realise I had grabbed hers. I take a deep breath and another, and she nods with each one, saying “That’s it. You’re okay. We’re okay.”
I feel eyes on me from all around. Uncle Carlos hands me a sweating bottle of water. Momma puts it up to my lips.”

Starr is also close with her extended family, in particular Uncle Carlos, who took care of her when she was younger and Starr’s dad was in prison for three years. Uncle Carlos acts as a second father figure to her. It’s beautiful to see that Starr has support coming from so many different people in her family. As the reader, you’d think that Starr’s boyfriend and her friends would be the closest people her life, but this book actually shows that it’s her family who she’s closest with.

“I was three when Daddy went in prison, six when he got out. A lot of my memories include him, but a lot of my first don’t. First day of school, the fist time I lost a tooth, the first time I rode a bike without training wheels. In those memories, Uncle Carlos’ face is where Daddy’s should’ve been. I think that’s the real reason they’re always fighting.”

It’s so important for a teenager to feel like they have a support system and Starr really has that in this novel. Her mother and father are so encouraging and I loved that Angie was able to emphasise their closeness and their devotion to protecting their child.

In the book, Starr feels like she’s two different people. She acts a certain way around her family and friends in Garden Heights, but differently around her school friends and her boyfriend Chris at Williamson.

“Williamson is one world and Garden Heights is another, and I have to keep them separate…Nobody mentioned Khalil at school today. I hate to admit it, because it’s like throwing him the middle finger, but I’m relieved.”

Starr doesn’t want her friends to know that her friend Khalil was the boy who got murdered. She thinks they won’t understand and she thinks they’ll make racist comments. And they do.

“I hope none of them ask me about my spring break. They went to Taipei, the Bahamas, Harry Potter World. I stayed in the hood and saw a cop kill my friend.”

After Khalil dies and the police decide not to investigate the office who killed him, most of Starr’s classmates organise a protest. It seems noble at first, but really, the only reason they’re doing it is so they can get out of class. Throughout the novel, Starr’s friend Hailey makes subtle comments and mutterings that some people perhaps wouldn’t consider to be racist. But they are racist, and Starr builds up the courage to confront her. This illustrates the systemic racism that undermines Starr’s world and the reader begins to understand what it’s like for people of colour in a society where racism is so prevalent.

“Dammit, Starr!” Hailey yells, recovering the ball. “Hustle! Pretend the ball is some friend chicken. Bet you’ll stay on it then.”

In addition to these three themes in the book, Angie Thomas has illustrated a very realistic premise with very realistic characters. The dialect in the book represents the dialect in places like Garden Heights, with shortened words and common phrases/words. You can really hear the characters when you’re reading the dialogue, and this is one of the strongest linguistic elements in The Hate U Give.

I can’t praise this book enough. It’s relevant, necessary, heartbreaking. If you’re looking for a book to read that perfectly illustrates racism in the 21st century and what that is like for a person of colour, then this is the book you should pick up.

The Hate U Give
Angie Thomas
March 2017
Walker Books Australia