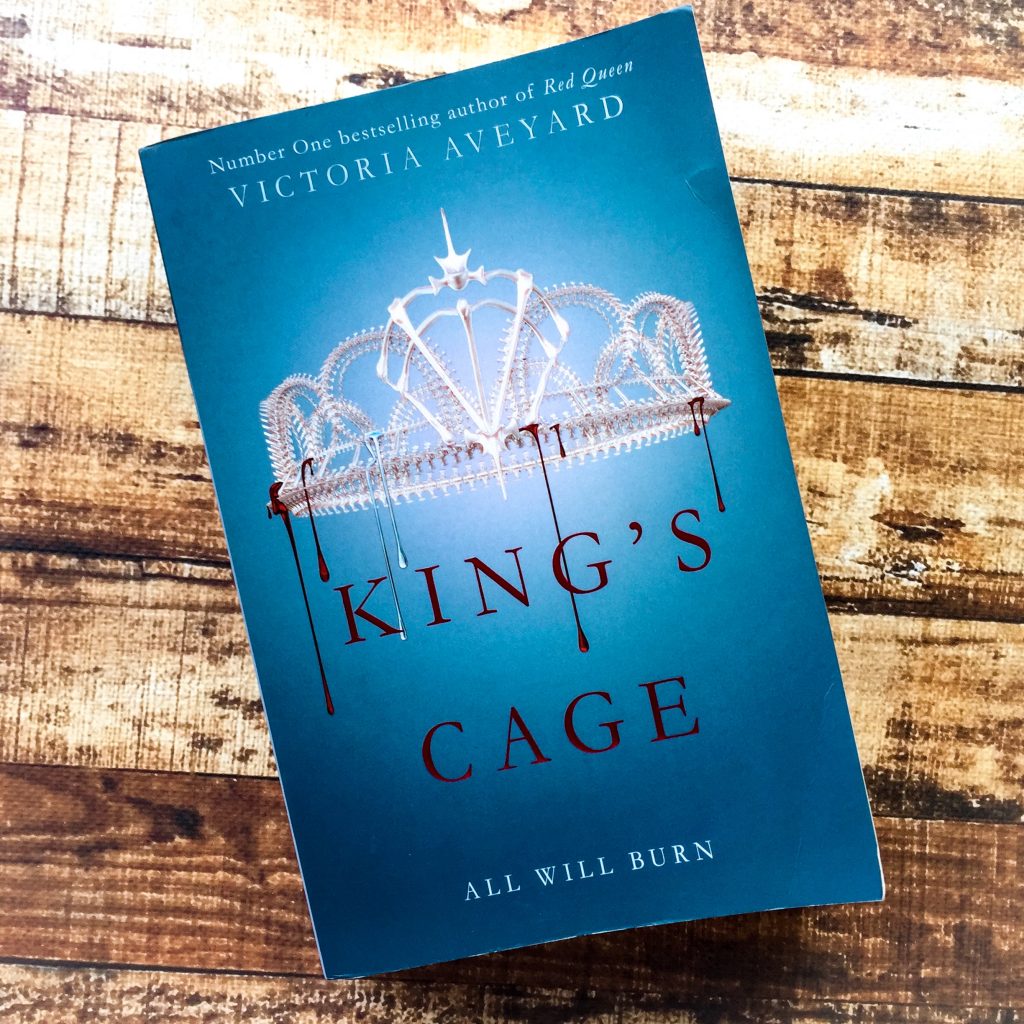 King’s Cage is the third instalment in Victoria Aveyard’s Red Queen series. I’ve reviewed the first two on the blog: Red Queen and Glass Sword. This review may contain spoilers for anyone that hasn’t read it yet.

We pick up where we left off at the end of Glass Sword: Mare Barrow is a prisoner to King Maven. She is powerless without her lightning ability (due to the presence of Silver Stone in the palace) and she is tormented by her captors. King Maven keeps her in a cell for months and she finds out very little information about the outside world. Maven’s mother may have once been controlling him, but now that she’s dead and he is King, he is every bit as lethal as she once was. He continues to weave his dead mother’s web in an attempt to maintain control over his country — and his prisoner, Mare.

Victoria has taken a very different turn with this book. Mare is no longer the strong fighter we saw in books one and two. She is helpless, forced to be Maven’s pawn in his public game. Maven parades her in front of televisions and forces her to say things to the public that aren’t true. Her allies, Cal, Cameron and Kilorn, can only watch from outside the walls of the palace as their leader Mare deteriorates and becomes Maven’s victim.

“I drift on a dark sea, and shadows drift with me. They could be memories. They could be dreams. Familiar but strange, and something wrong with each…Purple eats at the edge of my vision. I try to turn in to its embrace, knowing what it holds. My lightning is so close. If only I could find the memory of it and taste one last drop of power before plunging back into darkness. But it fades like the rest, ebbing away.”
-MARE BARROW

There is a lot on internal dialogue in this book. The book switches focus from Mare to Cal to Cameron and to Evangeline, and we come to understand all of their thoughts, fears, insecurities and worries. Victoria really gets inside their head so that the reader really understands who they are. They are three dimensional, fully-crafted characters who we sympathise with and empathise for.

King Maven is always an external character — despite the snippets we get when Mare is in the same scene with him, we don’t learn much more about him other than what others think of him. Or, from what we can read between the lines when he’s revealing something to Mare. There’s a particular scene where King Maven tells Mare about someone he used to love, and it does well to illustrate the kind of person he could’ve been had his mother not manipulated him and damaged him (psychologically) with her special ability.

The Queen used to invade his mind and force him to think things and do things he normally wouldn’t do. Maven reveals he was born disabled, but that the Queen wove herself inside his mind and forced him to walk properly. It hurt him so much that he hated her, but she still wouldn’t stop. And even until her death, she was manipulating him.

“Maven is a talented liar, and I don’t trust a single word he speaks. Even if he was telling the truth. Even is he is a product of his mother’s meddling, a thorned flower forced to grow a certain way. That doesn’t change things.”
-MARE BARROW

Most of the book is focused on Mare, but we do occasionally learn what the rest of the Scarlet Guard are up to, still fighting the cause and working to break Mare out of her cage. I did feel bored by Mare throughout the book. King’s Cage is about 600 pages, and yet Mare doesn’t fight back at all for most of it. She does as she’s told, and she doesn’t even try. I can understand this given she doesn’t have her powers, but she’s the leader of the Scarlet Guard. In books one and two, she was so fierce and I was expecting her to be more like that even whilst being held captive. But she is so complacent and plain in the book and I found myself quite bored.

I’m looking forward to reading the next book in the series because I know it’s the last and I want to know how Victoria will resolve things. Although, I don’t think this book needed to be as long as it was and I would’ve liked to see it condensed. Perhaps Victoria could’ve merged books three and four?

Has anyone else read this book? Or perhaps the first two in the series? I’d love to hear your thoughts in the comments below.

Thank you to the publisher for sending me a review copy of this title in exchange for an honest review.