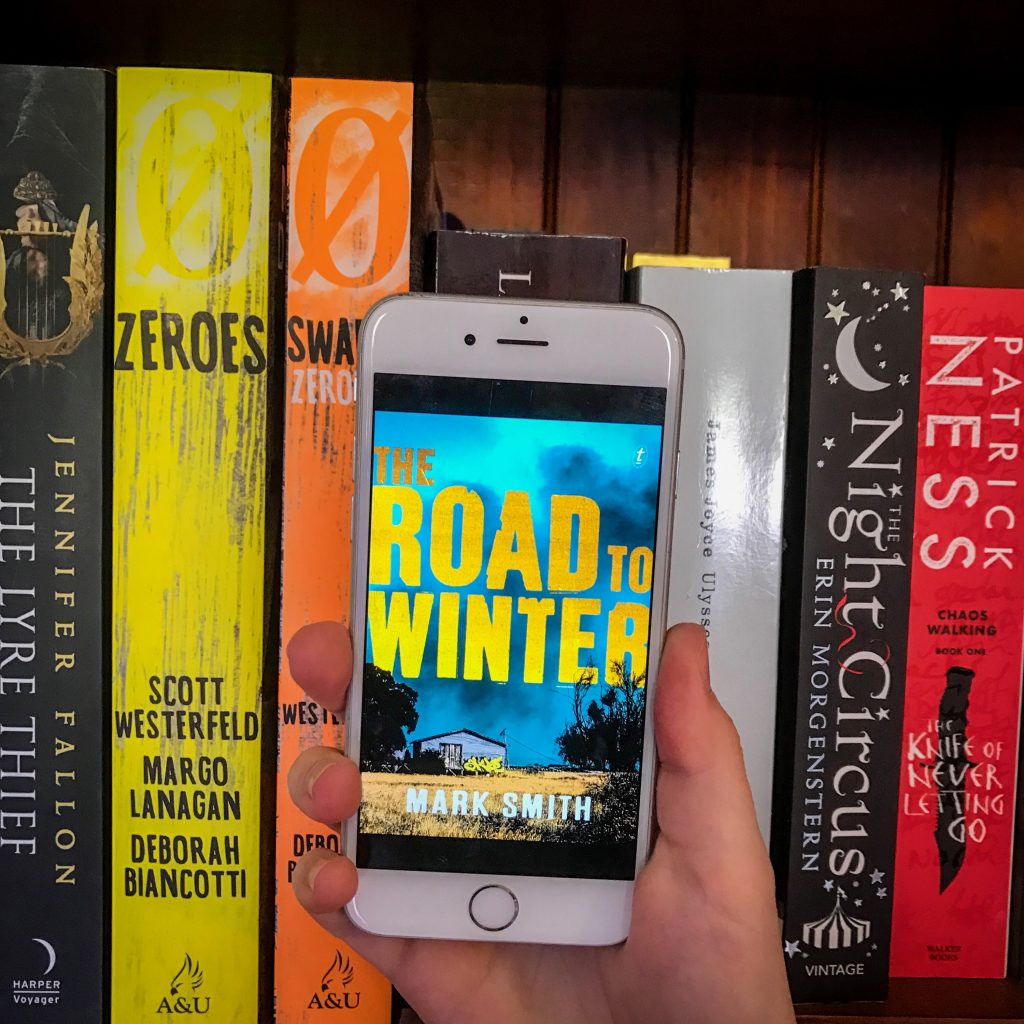 Since a deadly virus and the violence that followed wiped out his parents and most of his community, Finn has lived alone on the rugged coast with only his loyal dog Rowdy for company.

He has stayed alive for two winters—hunting and fishing and trading food, and keeping out of sight of the Wilders, an armed and dangerous gang that controls the north, led by a ruthless man named Ramage.

But Finn’s isolation is shattered when a girl runs onto the beach. Rose is a Siley—an asylum seeker—and she has escaped from Ramage, who had enslaved her and her younger sister, Kas. Rose is desperate, sick, and needs Finn’s help. Kas is still missing somewhere out in the bush.

And Ramage wants the girls back—at any cost.

The Road to Winter feels like a crossover between young adult fiction and adult fiction. It’s got the apocalyptic setting and the teen romance of the usual dystopian YA thriller, but it has the intrigue, uniqueness, and plot development of an adult novel. All ages will love this book.

Mark Smith doesn’t shy away from dark topics. When Finn helps a young girl, Rose, who was being held captive, it becomes quite clear what her captives were doing to her. It also becomes clear how important it is that Finn saves her sister Kas from that same fate.

I really loved this novel. It may have been a slow burner, and it may have taken a bit for me to warm to Finn, but in the end I grew to love the setting and the premise and I think Mark did a fantastic job of drawing the reader in. Nothing frustrates me more than an end-of-the-world novel where everything seems to work out for the protagonist/s. In The Road to Winter, not everything works out for our main characters, which makes everything seem more realistic. It makes the dangers and the antagonists seem more realistic and in turn, it made me more invested in the story.

“Something that kept me in touch with my old life. It’s dangerous, not because of anything in the water but because of what’s on the land – who might arrive in town while I’m caught up enjoying myself. But it’s a risk that’s worth taking to stay sane.”
-FINN

Mark has done a great job of establishing the secluded Australian setting. At times it feels quite claustrophobic, and this does wonders for engaging the reader. Angowrie is the small coastal town that Finn grew up in. His parents are dead and it’s just him and his dog. Even when he ventures out to try and find Kas, there’s an eerie, haunting atmosphere that envelops the novel and really draws the reader in.

Unfortunately, there were a couple of (very little!) things that I disliked about the novel. Initially, Finn just seems to be hanging around. He surfs during the day, hunts his own food and hangs out with his dog. This seems a little too good to be true. If the world really had been wiped out by a virus, wouldn’t you be motivated to find allies? To find more food? Surely rabbits aren’t always going to be around for you to capture and eat. And even when Kas and Rose come into the story, there are a few times where everything seems a little too relaxed.

Another element of the story that I found a little underdeveloped was the budding relationship between Kas and Finn. They go swimming together and their relationship suddenly blossoms with a kiss. It wasn’t built up too much prior to this so I found myself quite confused.

Despite these two things, I did really love this novel and I really want to see where Mark takes the story. I recommend this to young readers who are looking for the next dystopian/apocalyptic read for their shelves.