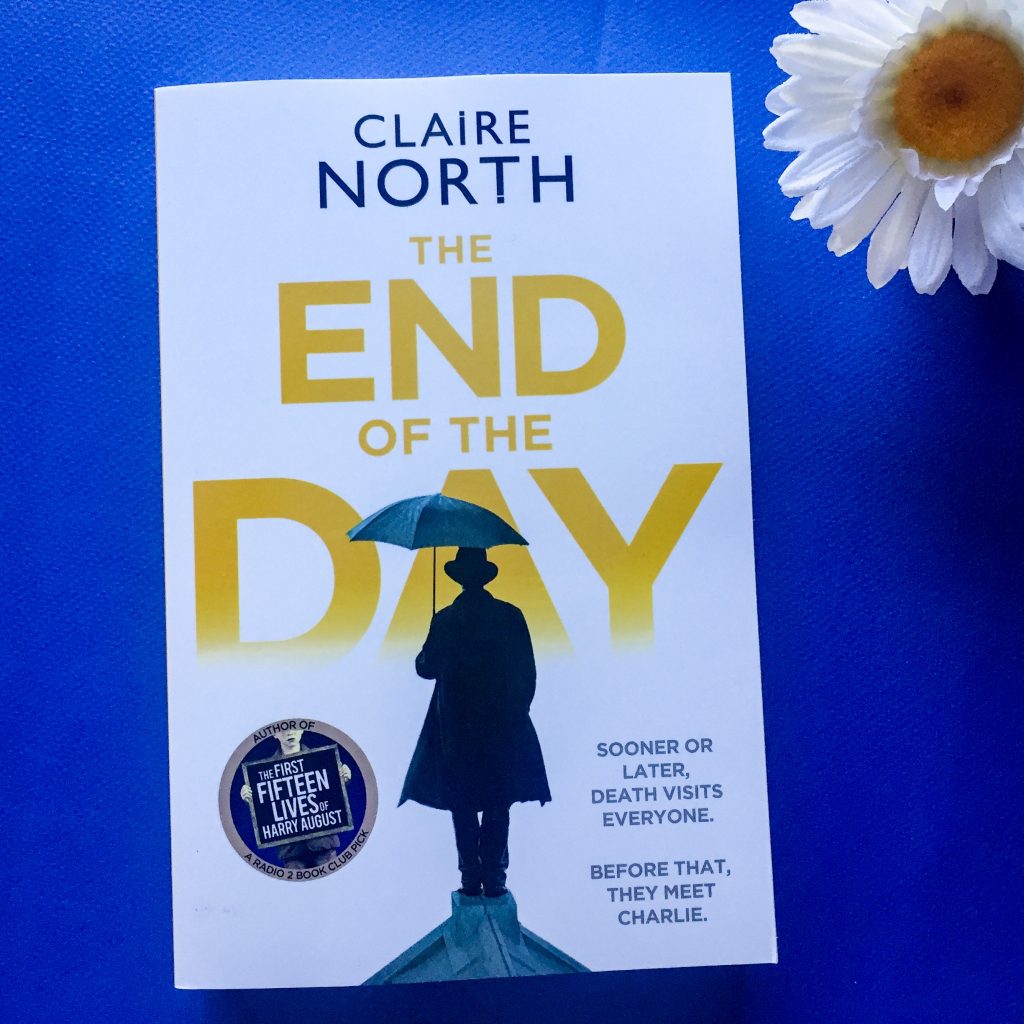 Charlie has a new job. He gets to travel, and he meets interesting people, some of whom are actually pleased to see him.

It’s good to have a friendly face, you see. At the end.

But the end of all things is coming. Charlie’s boss and his three associates are riding out, and it’s Charlie’s job to go before.

Sometimes he is sent as a courtesy, sometimes as a warning. He never knows which.

The End of the Day is an adult fiction novel about The Harbinger of Death, also known as Charlie. He meets everyone — but only once. You might meet him in a hospital, in a warren, or at the scene of a traffic accident. Then again, you might meet him at the North Pole — he gets everywhere, our Charlie. Sometimes he is sent as a courtesy, sometimes as a warning. He never knows which.

You see, Charlie is the person who visits you before Death does. Sometimes it’s because you’re going to die, but sometimes it’s because he needs to gift you something. In one instance, Charlie had to gift someone a helmet. That person then wore the helmet and it was the only thing that kept him alive when he was hit by a car. And so Death passed him on by, no longer needing to collect him.

Charlie learns a lot from his new job as the Harbinger of Death. He sees new places and learns so much about the world — he opens his eyes. He is also sees the horrors of the world. In one part of the book, he is in Africa with a female comedian and a group of men approach them, intending to sexually assault her. They get away, but when Charlie reports it to the police, they pretend it didn’t happen and they make excuses for the man.

“You don’t know much about our country, do you?” breathed the older man, not unkindly. “That’s all right. Not many people do. They talk about this continent — Africa — as if it was one big place, as if your Scotland was the same as Greece. It’s Africa, they say, it’s just how Africa is.”

The End of the Day is quite poetic and lyrical, with shortened sentences and experimentation of punctuation. There are almost 100 chapters in this book, with some chapters only being half a page or less. It allows the reader to go through the book quickly, reading the story in short bursts.

The novel is broken up into nine parts, each separated an even amount. I found this quite useful, because in addition to the chapters, breaking the book up into parts allowed me to easily bookmark where I was up to and come back to it. Each part of the book really focused on a different aspect of Charlie’s life, so if you took some time between reading each part, it wouldn’t matter. You’d still be able to follow what was happening.

“A man lay on the ice.
He lay like one sleeping, a peaceful child, his knees tucked in, his head resting on his hands, his eyes closed. He was, Charlie was absolutely certain, dead.”

Charlie forms his own questions on his journey. What is death? Why is death? What role does he really play in death? A few times in the novel, Charlie is kidnapped and asked those questions. He can’t really answer, because he’s still struggling to understand it himself.

The End of the Day is a novel to be savoured — the writing is beautiful and the characterisation thick with layers. There’s definitely more at play here. The book is making a comment on the world, and the rapid decline of it. The book is making a social commentary about all the different aspects of the world and all the things that impact it negatively, from Death to War to Pestilence to Famine. There’s a Harbinger for all of them, and Charlie crosses paths with them too in the novel.

I really loved this novel, but it is an investment for readers. It’s long and it requires a fair bit extra to unpack it — more than your usual fiction novel. Read this if you love your literary fiction. Read this is if you’re looking for something that’s just a little bit different (in both plot and writing structure).

The End of the Day
Claire North
April 2017
Hachette Publishers