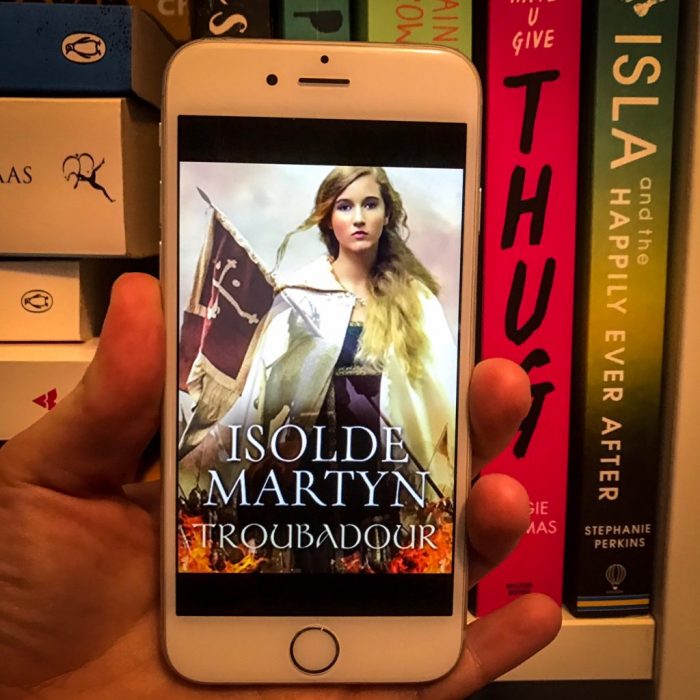 Forced to flee the English court after the lecherous King John attacks her, Adela, the queen’s hairbraider, finds employment in the entourage of Lady Alys. Alys is on her way to marry the Lord of Mirascon, a fiefdom in southern France. However, the south is under threat from Pope Innocent III’s military crusade against the heretics.

After trying in vain to rally his fellow lords against invasion, Richart, Vicomte de Mirascon, makes an alliance with King John. A political marriage to the Lady Alys – the king’s discarded mistress – will allow Richart to safeguard his people from a merciless land grab and cruel slaughter.

When the bridal party is ambushed, Adela is mistaken for her dead mistress by the people of Mirascon. Adela knows she must tell Richart that she is not his betrothed, but as she is dragged deeper into the deception, she is also powerfully drawn to the beleaguered man trying to protect his people and his culture. As the savage army marches south, can Richart and Adela overcome a web of deceit and treachery and evade the bonfires of the crusaders, or will their land of troubadours and tolerance be destroyed forever?

At first, this novel is a case of mistaken identity. Adela is mistaken for the dead Lady Alys and finds herself engaged to the one man she’s been hoping to unite with since she met him at the English court: Richart. She’s happy she’s with him, but she desperately wants to tell him the truth. And then quite early on in the novel, Richart finds out for himself. The two are separated. And then it becomes a novel about survival and uncovering betrayal.

Adela is a strong, resilient character, capable of surviving even in the most dire of times. Isolde Martyn has crafted a fantastic protagonist for this book, drawing us in with her plight and her dimensional construct.

“After she had scrubbed the first of Lady Alys’ underskirts, she sat back and drew her hand across her perspiring brow. Her presence had disturbed the stream’s tiny dwellers but now a damselfly clad in iridescent armour returned, then a trio of water skaters came skimming back, anxious to reclaim their manor.”

Troubadour is a lengthy book with plenty of action and plot and underpinned by truly wonderful characters that I loved reading about. I was enthralled throughout the book, eagerly turning each page to keep reading and thoroughly enjoying every chapter. The book is filled with historical information and an engaging cast of characters. This novel has betrayal, love, trickery, and gutsy courage – everything you could want in a historical fiction novel.

Adela and Richart are star characters, as are Maud and the hilarious Derwent. Right from the beginning, you’re backing Adela. You want her to succeed and flourish and you want her to survive. She’s young and naive, but she’s also strong and intelligent and compassionate.

“Adela received him courteously, but she would have preferred to swim a filthy moat rather than describe the massacre again.”

What I loved most about this book is that it’s a standalone, unlike a lot of other epic fantasy books where there are a minimum of six books in the series and it’s a huge investment to keep going. This novel had perfect pacing and was the perfect length to keep me entertained, and the conclusion to the novel was satisfying and engaging. I loved that this was just one novel and not a long-winded series that you had to read to find out the fate of the characters.

I recommend this to fantasy lovers and those of you who love Game of Thrones, but I also recommend this to readers who are perhaps looking to dabble in a bit of fantasy and don’t want to commit to something too heavy. This is a really enjoyable read, and I would highly recommend Isolde Martyn.