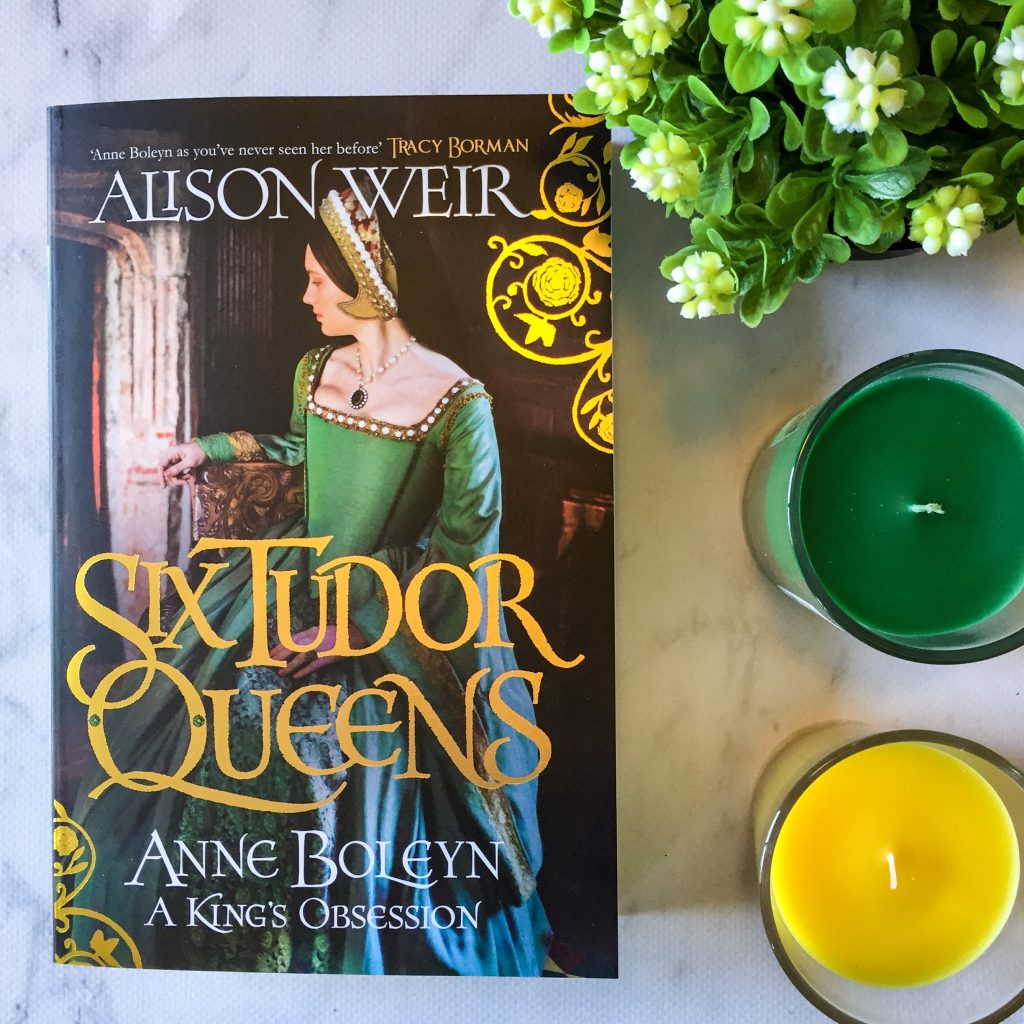 ANNE BOLEYN: A KING’S OBSESSION is the second captivating novel in the Six Tudor Queens series. An unforgettable portrait of the ambitious woman whose fate we know all too well, but whose true motivations may surprise you.

The young woman who changed the course of history. Fresh from the palaces of Burgundy and France, Anne draws attention at the English court, embracing the play of courtly love. But when the King commands, nothing is ever a game.

Anne has a spirit worthy of a crown – and the crown is what she seeks. At any price. History tells us why she died. This novel shows her as she lived.

This book was such a refreshing read. It almost feels like fiction, with well-constructed characters and quick pacing and plenty of surprises and unexpected events.

For those of you who are familiar with Anne Boleyn’s story, you’ll know the major moments in her life and will therefore be aware of what’s coming. But what you don’t know is that Alison has added in so many extra details. This book doesn’t just feel like some historical document about someone’s life, it feels like we actually have the opportunity to know Anne Boleyn. To find out things about her that are hard to find in other books.

I don’t know about other readers, but every time I’ve read something on Anne Boleyn it really just talked about the events that took place — her relationship with Henry, her marriage, her daughter, her relationship with her sister, and her unfortunate death. But what I always feel like I’m missing is any sense of who she is. But in this book, the reader comes to understand Anne’s doubts and her fears, her reservations and her triumphs.

You have to go into this book knowing that Alison has had to join some dots along the way (particularly with the dialogue). As she says in her author’s notes, Anne Boleyn is “unknowable”. Yes, Alison had access to letters, documents and testimonials from the time, but how do you use that to capture someone’s personality? Well, on some level, you have to come up with that yourself based on Anne’s circumstances.

Alison has managed to bring Anne Boleyn to life in a plausible and enjoyable way. I loved reading about her life and although there are some things about Anne that might not have been true (she is really quite flawed in Alison’s book) the factual timeline of Anne’s life is true. And her death, of course, is true. But that’s something most people know already. What we don’t know is about her life and her time as King Henry’s wife.

We meet Anne when she’s a young teenager and Alison documents her life until her execution at age 36. She’s determined, courageous but at times also naive and ignorant. She challenges the King when she probably shouldn’t, and she no doubt lets her fears get the best of her. She’s so worried about producing a male heir that she acts horribly towards Katherine of Aragon and her daughter Mary.

At times, I grew frustrated with Anne and my sympathy for her lacked. Whilst it is admirable that she was bold enough to speak up for herself and use her intelligence and confidence to try and manipulate the court, sometimes she was not clever about it. She was brazen and quick, when perhaps she should’ve deliberated for a while before enacting any plans. The politics of the court were dense and at times hard to follow, but Alison shows the reader how involved Anne was and how often she swayed Henry’s thoughts and actions. At times, Anne really was quite cunning.

There were a few aspects of the novel where I felt that Alison was clutching at straws. For example, she writes George Boleyn (Anne’s brother) as a rapist even though there is no real historical evidence to suggest that he was. She also writes that for the six years when Henry was trying to divorce Katherine to marry Anne, he not only didn’t sleep with Anne, he didn’t sleep with anyone. I find this hard to believe, given all the historical evidence that Henry was a womaniser who would not have been able to remain celibate for six whole years.

What is accurate in the book as it happened in real life was the gossip and unfavourable attitude from the population. There is no doubt that Anne Boleyn was not a popular Queen. In fact, all of the slanders and libels in the book came from contemporary authentic records — the people hated Anne and many believed that Katherine was still the True Queen.

“Within the city walls, the crowds had turned out in their thousands, but as before they were largely silent and their welcome was cold…Remembering what happened at Durham House, Anne prayed fervently that the citizens would confine their hatred to verbal abuse. She felt horribly exposed in her open litter, a sitting target for anyone who might make an attempt on her life.”

As someone who loves historical fiction and has always been fascinated by Henry VIII and his wives, I really loved reading this book and am looking forward to the rest of the series (Alison Weir is writing a book on each of King Henry’s wives).

This is a three dimensional portrait of a woman that none of us will every really know. At times, the book felt a little long and particularly in the middle I think things could’ve been sped up for the sake of the reader’s attention, but otherwise it’s a fascinating read.

I’m going to leave you with something that Alison wrote in her Author’s Note at the end of the book. This is something I NEVER KNEW and am both astounded and horrified to learn:

“There is discussion about the survival of consciousness after decapitation. In 1983, a medical study found that no matter how efficient the method of execution, at least two to three seconds of intense pain cannot be avoided…Anne Boleyn did possibly experience a few dreadful moments in which she was aware of what was happening.”