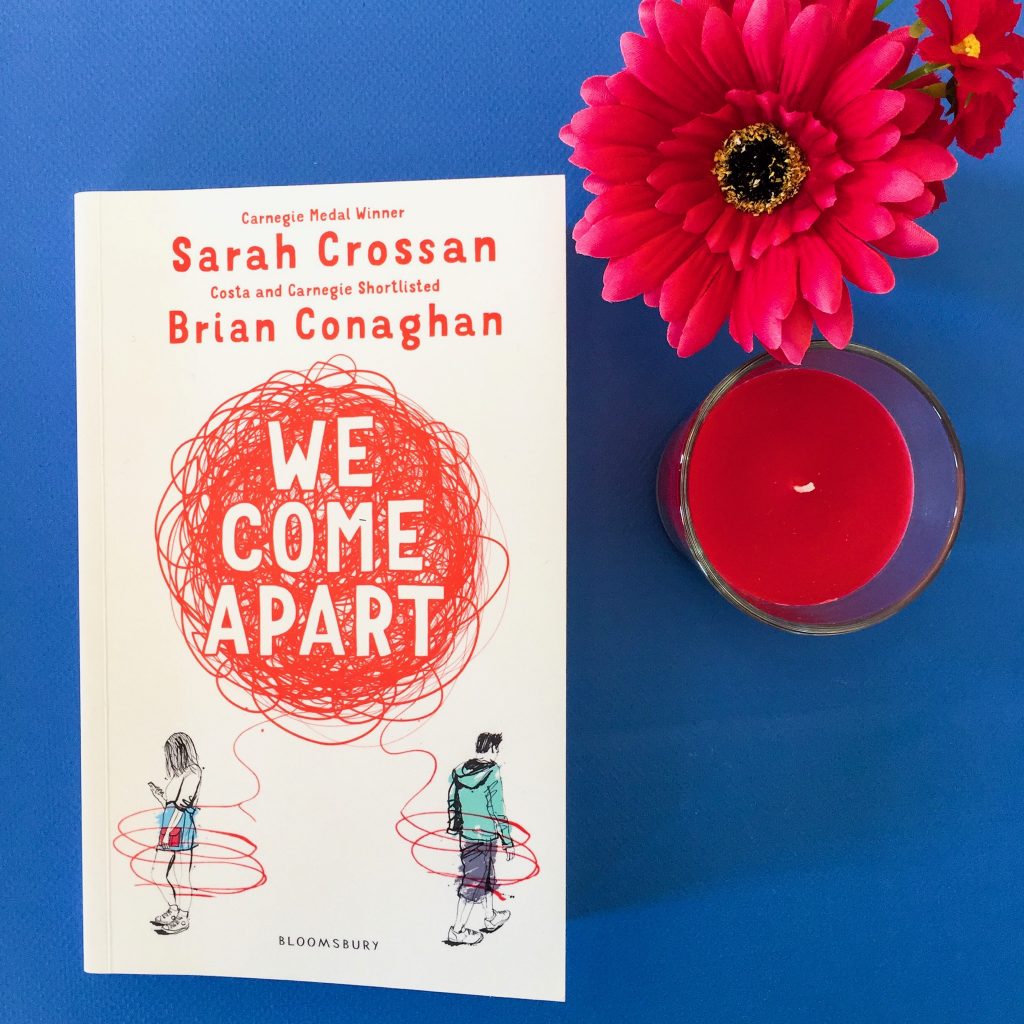 Authors Brian Conaghan and Sarah Crossan have joined forces to tell the story of Nicu and Jess, two troubled teens whose paths cross in the unlikeliest of places.

Nicu has emigrated from Romania and is struggling to find his place in his new home. Meanwhile, Jess’s home life is overshadowed by violence. When Nicu and Jess meet, what starts out as friendship grows into romance as the two bond over their painful pasts and hopeful futures. But will they be able to save each other, let alone themselves?

We Come Apart is a YA novel written in verse form, telling the story of two teenagers whose lives may be very different but both teenagers are feeling lost and alone.

Jess’ step dad abuses her mother and her brother skips out on them to live with his girlfriend. Nicu is a Romanian immigrant who is new to London and his family are lining up a wife for him. It’s his culture, he explains to Jess. But Nicu doesn’t want to marry a stranger and he doesn’t know what to do about that.

I am fifteen
and man now,
so my working in lorry van
make much sense.

Real reason we come to
England
is because I am
older,
and cannot be without
working
wealth,
or
wife.
-NICU

When the two of them meet doing community service, they become friends. They seem to bond over their broken homes and their troubled consciences, and Jess starts to separate from her friends at school. She’s popular, but they all treat Nicu terribly and she doesn’t want to stand around and watch. The boys make threats to Nicu, and they scare him in the change rooms.

I’ve been stealing stuff for ages,
Can’t remember the first time any more,
but it was way before
I started secondary school.

Small stuff back then —
other kids’ rulers,
fags from Mum’s bag.
-JESS

The style of writing in the book makes this a really quick read. You can flick through the book in one sitting. Because this is poetry and not prose, there is a lot more left unsaid than said, but I’m sure that this was the intention. The placement of each word is almost as important as the words themselves, conveying meaning in their positioning and drawing focus to emphasis.

Nicu’s story seems timely, no matter where in the world you live. In most schools, there are always going to be children who have arrived from another part of the world. Perhaps their English isn’t that great, or their religious or cultural practices are a little different from the other kids. We Come Apart highlights the bullying and racism that can go on in high school when an international student arrives.

At school I am
The boy worse than death.
Me,
the boy people won’t waste breath on.
-NICU

Both the characters are wonderful. Jess is snappy, bossy and withdrawn, and Nicu is approachable, friendly, and overly trusting. They seem like unlikely friends, but the hardships in their lives allows them to bond and forge a friendship and then a relationship.

Their relationship is not the main focus of the story, but pivots around many other elements of the book.

Shadows moving behind the front door.
A leg.
A head.
and I hear it too.
A thud.
A Scream.
And when I go in
Mum’s lying in the hallway,
blood seeping into the rug,
Terry standing over her,
his phone on the hall table.
-JESS

Don’t let the verse format of the book scare you off reading it. I’d recommend this to young adult readers, but also to people who are readers of poetry.