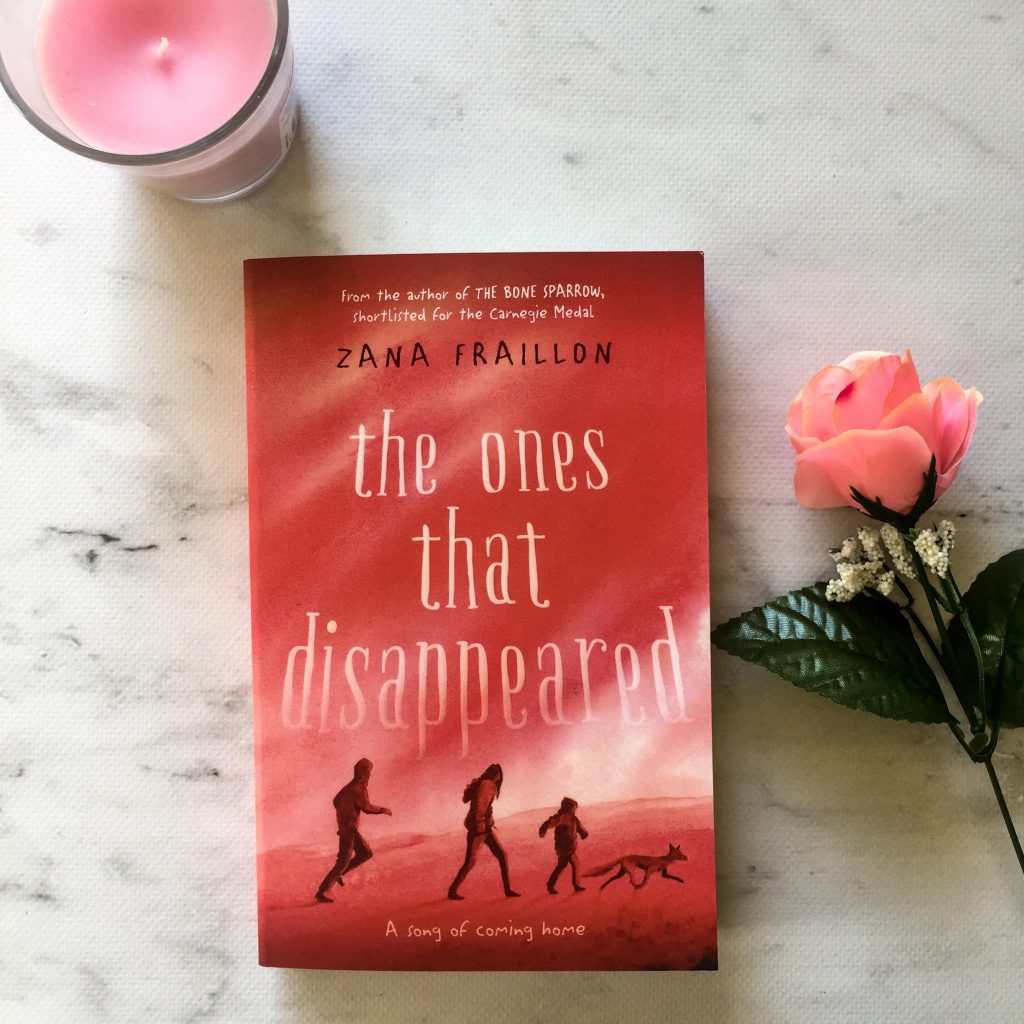 Kept by a ruthless gang, three children manage to escape from slavery. But freedom isn’t just waiting on the outside.

Separated, scared and looking after a small child, Esra will do whatever she can to reunite with her friend Miran, who was captured by the police – the police who she mustn’t trust.

The Ones that Disappeared is the latest YA novel by the Carnegie-shortlisted author Zana Fraillon. It’s a powerful tale about three trafficked Syrian children searching for freedom and hope. Across the world, millions of children are the victims of human trafficking. Zana takes an issue that people no doubt think is ‘far away’ and brings it into our hands. The book is set in Australia.

‘Be careful girl,’ he said, his voice growling like Orlando’s dogs. ‘Most people won’t tolerate a mouth like that. Better hope I don’t tell Orlando he needs to shape you up. Better hope I don’t tell Orlando he should sell you on. I know people who would pay a good price for a girl like you.’ Then he jammed my face into the bricks and held it there, watching.

This book follows three trafficked children: Esra, Miran and Isa. They have done different types of jobs since leaving their families and their home, and they’ve often suffered beatings if their work was not deemed to be of an acceptable standard.

Their job is to take care of opium plans, but then something goes wrong — a fire starts and the police turn up and Miran gets captured. Esra and Isa run away along the river, taking shelter in a cave.

“I move back to the wall and pull Isa over me, my arms wrapping him tight. I look at Skeet again, his face burning into my brain. His toad opens an eye and stares straight back. I won’t tell him, this boy, this Skeet, that when he talked of his circus, filled with toads, it made me remember.”

Zana’s writing is poetic and lyrical, with flowing sentences and brief but realistic dialogue. It’s a short read, despite the topic that the book explores. There’s a bit of magical realism in the book. Esra and Isa meet a young boy – Skeet – who is ignored by his alcoholic mother, and the three of them craft out a Riverman from things they find along the bank. And then the next day, that Riverman is real and he leads them down into the tunnels of the town in an effort to save Miran from their captors.

This is a book about survival and bravery, but also about hope and courage. Esra and Isa are desperate for freedom and Zana shows us that it’s worth fighting for what you want, even if what you’re fighting for is something that is a basic human right. And Skeet is searching for something more. At times, it feels like he’s searching for family. And at other times you feel like all he wants is love and someone looking out for him.

This book is daring because young audiences may struggle to grasp the scope of these experiences in the world, however, Zana has done a wonderful job of taking the issue of child slavery and presenting it to readers in an accessible way. There are some fantasy/magic realism elements to this book, particularly with the Riverman who comes to life. But the book is also very literary and poetic. This book gives voice to the often forgotten victims of child slavery here in Australia.

I stand up, my hand on Isa’s shoulder and look down at the voice. He’s old. A white beard, knotted and dirty, and a jacket wrapped tight protecting him from the rain. He’s standing with his hands on his hips, staring at us with hard in his eyes.

The Ones That Disappeared does drag a little bit in the middle, with slow pacing and some stagnant conversation that allows the reader’s attention to slow. But Zana is not glamourising anything and her intention is to shine a light on trafficking and how scary and dangerous it is for these children.

The Ones That Disappeared
Zana Fraillon
June 2017
Hachette Book Publishers