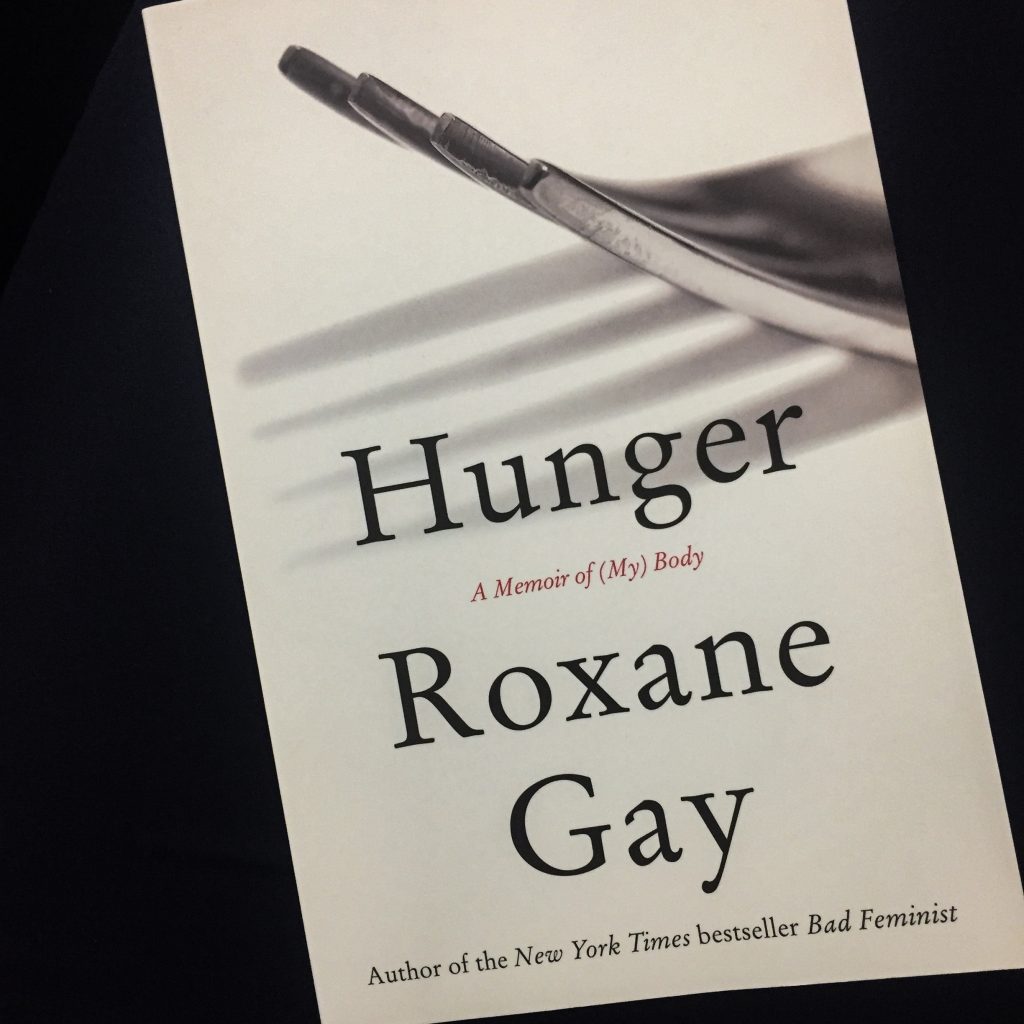 Hunger is a memoir that is unapologetic and searingly honest, and evokes heartbreak, admiration and respect from its readers. Roxane Gay is a brilliant memoirist, pulling apart her life in carefully selected sections to allow the reader to delve into her life and better understand how she has become who she has become.

“I ate and ate and ate in the hopes that if I made myself big, my body would be safe. I buried the girl I was because she ran into all kinds of trouble. I tried to erase every memory of her, but she is still there, somewhere. . . . I was trapped in my body, one that I barely recognized or understood, but at least I was safe.”

When Roxane was 12, she was the victim of a horrific gang rape at the hands of her boyfriend and his mates. Roxane didn’t know how to come to terms with what happened with her, and she kept the rape a secret for years. She dealt with the assault by eating. She turned to food as comfort.

Hunger oozes a punctual, academic tone. Roxane focus on events and key moments more so than her feelings or emotions about those said events. Roxane is stating what happened to her and how that effected her. She is telling the reader about the key moments in her life, and how they became a catalyst for the later events in her life.

“I am shoved in public spaces, as if my fat inures me from pain and/or as if I deserve pain, punishment for being fat. People step on my feet. They brush and bump against me. They run straight into me. I am highly visible, but I am regularly treated like I am invisible. My body receives no respect or consideration or care in public spaces.”

What happened to Roxane was awful, and I think it’d be really difficult to find someone who read Roxane’s story and didn’t feel heartbroken for her. How she felt afterwards was equally as hard to read about. In a later chapter, Roxane talks about how her boyfriend at the time (who was the ringleader) now has a high-paying, executive job and sometimes she looks him up online to check up on him.

An underlying element of this book that builds and builds quite subtly is Roxane’s determination and passion for writing. Even when she was at her darkest, she would spend hours at her computer writing stories and submitting them. Even when she had no money and no job and no prospects, she was working on her writing. It was actually really inspiring to read about that in her story. Amidst all the horror in her life, she still had the drive to write. There was still something there helping her and pushing her to succeed.

“For so long, I closed myself off from everything and everyone. Terrible things happened and I had to shut down to survive. I was cold, I’ve been told. I often write stories about women who are perceived as cold and resent that perception. I write these women because I know what it’s like to have so much warmth roiling beneath the skin’s surface, ready to be found.”

Hunger is brilliant. It’s so brave and so honest, but it’s also a fantastic read. I finished the book so quickly because of how engrossed I was in Roxane’s story. I really can’t fault this. PLEASE go buy this.