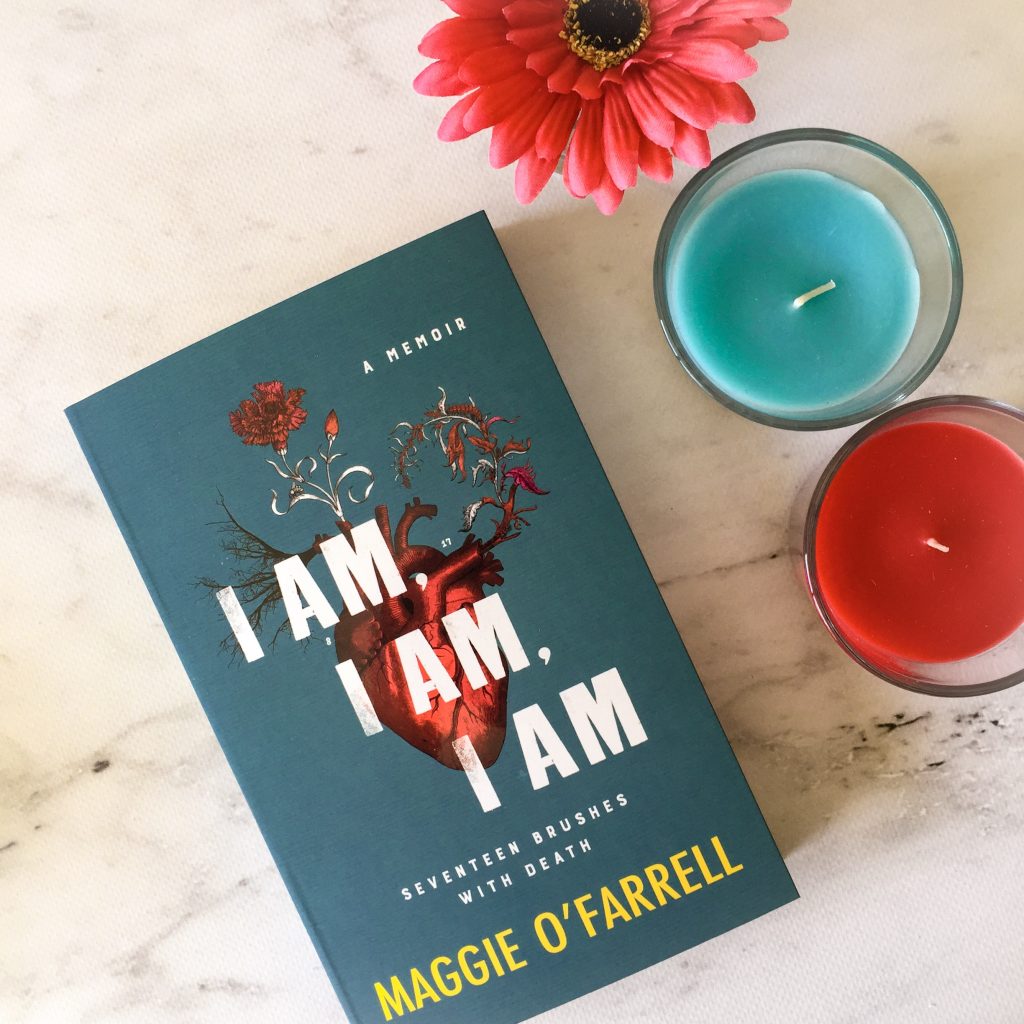 An electric and shocking memoir of the near-death experiences that have punctuated Maggie’s life. The childhood illness she was not expected to survive. A teenage yearning to escape that nearly ended in disaster. A terrifying encounter on a remote path. A mismanaged labour in an understaffed hospital.

This is a memoir with a difference: seventeen encounters with Maggie at different ages, in different locations, reveal to us a whole life in a series of tense, visceral snapshots. Spare, elegant and utterly candid, it is a book to make you question yourself.

I Am I Am I Am is as shocking as it is inviting. Maggie O’Farrell documents these near-death experiences with what feels like third person narration, separating herself from them so she can accurately describe the events and how they unfolded, whilst also being able to remember and articulate exactly how she felt at the time and how it then affected her life afterwards.

This memoir is intimate, and whilst it is compact enough to read in one sitting, the reader walks away from it feeling like they’ve been punched.

Maggie opens the book with a chapter about her narrow escape from a rapist and murderer:

“On the path ahead, stepping out from behind a boulder, a man appears…I passed him earlier, further down the glen. We greeted each other…he has been waiting for me: he has planned this whole thing, carefully, meticulously, and I have walked into his trap.”

It almost seems fictional, how some of these near-death experiences unfolded — Maggie and her husband are overseas travelling when an armed robber holds a machete to her throat and demands they give him all of their cash. It’s heart-wrenching, but it’s also enticing. You’re sucked into the stories.

Each chapter tells of a different story, and the timeline moves around from the 1980s to the 1990s and then early into the 2000s — the timeline does not move chronologically. Her husband and children weave in and out of the memoir, but Maggie remains the central focus. We are intrigued by her life and determined to read as much as she will give us.

I Am I Am I Am allows the reader to confront their own vulnerability; we become determined to make our lives count. I finished some of these chapters and thought ‘what would I do in this situation? Would I be able to survive it?’

In one particular chapter, Maggie is sitting inside her car with her baby, breastfeeding. They’re parked on the side of a deserted highway and her husband has walked over the hill to watch the waves roll in. Maggie, alone with her child, sees two strange men approaching the car:

“…the men have seen my panic, see my problem, and now they are running and I have no idea what they want — money, car, baby, woman — but I don’t want to find out, I don’t need to know the answer to that question because maybe they don’t even know themselves. Maybe they’re just ready to react and exploit whatever they’ll find here.”

Amidst all of these true stories, Maggie has found a way to embed what she’s learnt into the book. She confronts what she’s gone through and how it affected her, and she often reminisces about these experiences with maturity.

“You do walk out. The nurse tries to stop you but you don’t listen. You’ve been through this enough times to be fully aware of ‘what happens next’. As you take the stairs down, away from the scanning department, you feel the notion, the idea of the child leaving you with each step.”

There’s a nice connection between her childhood and then her experiences as a mother raising her own daughter. Maggie grew up with a rare illness, and her daughter has grown up with severe allergies. As a result, a lot of Maggie’s learnings as a child have helped her parent her daughter.

I can’t fault this book. It draws you in and you find yourself holding your breath almost the entire way through. You know Maggie has survived everything, because she’s written this book, but you are desperate to find out how these events have unfolded. And how she’s escaped them.