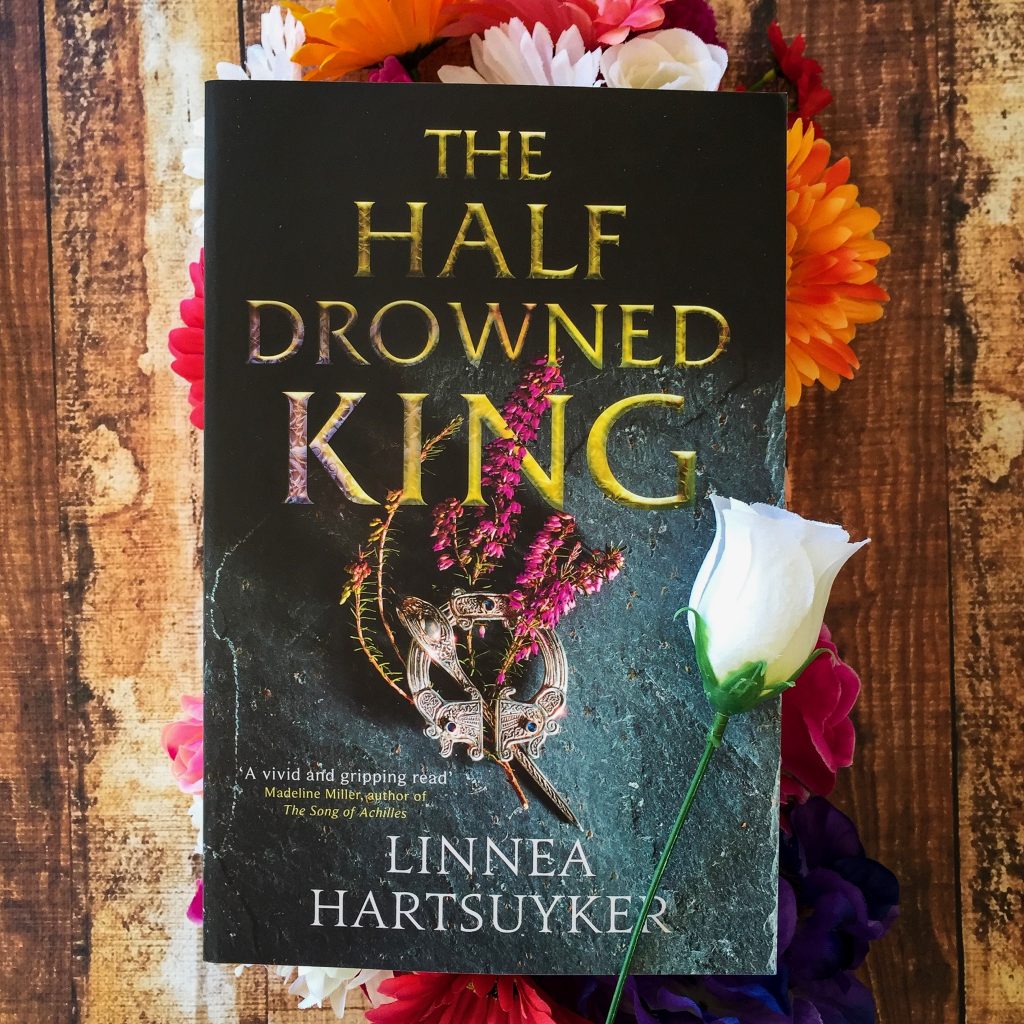 Since the death of Ragnvald Eysteinsson’s father in battle, he has worked hard to protect his sister Svanhild and planned to inherit his family’s land when he comes of age. But when the captain of his ship tries to kill him on the way home from a raiding excursion, he must confront his stepfather’s betrayal, and find a way to protect his birthright. It is no easy feat in Viking-Age Norway, where a hundred petty rulers kill over parcels of land, and a prophesied high king is rising.

But where Ragnvald is expected to bleed, and even die, for his honour, Svanhild is simply expected to marry well. It’s not a fate she relishes, and when the chance to leave her stepfather’s cruelty comes at the hand of her brother’s arch-rival, Svanhild is forced to make the ultimate choice: family or freedom.

Drawing from the Icelandic Sagas, The Half-Drowned King takes inspiration from the true story of Ragnvald of Maer – the right hand man of King Harald Fairhair – and his sister, Svanhild, as she tries to find freedom in a society where the higher her brother rises, the greater her worth as a political pawn.

Hartsuyker’s The Half-Drowned King is the first novel in a viking trilogy set in long-ago Norway. It is a heavily fictionalised retelling of the Saga of Harald Fairhair, which was written in the 13th century. This swashbuckling debut is about family, friendship and love. It’s also about revenge and punishment.

Similar to Game of Thrones, The Half-Drowned King is full of murder, mayhem, betrayal and terrible life choices. The trilogy is about the rise of Harald, who eventually became the first King of Norway in the 9th century.

The novel switches back and forth between Ragnvald’s POV and his sister Svanhild’s POV. Ragnvald is twenty years old and incredibly bold and determined. He is betrayed in the opening chapters of the book — a plot orchestrated by his stepfather — and then over the course of the novel he swears allegiance to both King Hakon and then King Harald. He wants to win enough land and enough power to seek revenge on his stepfather.

“Ragnvald was not sure later what warned him; perhaps the quiet that lay over the farm felt deeper than that of sleep. He already had his hand on the hilt of his sword when he heard a woman’s low moan, a despairing sound.”

Svanhild is resourceful and independent, and has higher hopes for herself than just being someone’s wife. She escapes an arranged marriage but then cunningly aligns herself to her brother’s betrayer, Solvi. She then marries him.

“The days passed slowly at Hrolf’s farm. Whenever Svanhild could, she asked for work outdoors with the sheep and goats. Hrolf had few cows, for they could not survive well on such sparse grass. She stayed outside all day long, her hands growing brown in the sun, only coming inside and exposing herself to the barbs and sniping of Hilda’s sisters when she had to.”

Hartsuyker doesn’t shy away from depicting the torture and violence of that time period — rape, mutilation and slaughter. The battles and the raids stretch on for pages and the author does a great job of depicting those in enough detail so that the reader is interested, but not too much description where the reader is bored and needs to skim the chapter.

Ragnvald matures a lot over the course of the novel, learning that just because the land is his birthright doesn’t mean he’s earned it. He learns a lot about leadership and honour from those around him — he takes charge and makes smarter decisions. Additionally, Svanhild learns to trust her instincts and stick to her own decisions. She wants a say in her fate. She really comes into her own over the course of the novel, speaking freely to those that she disagrees with and escaping when she senses ill will against her.

The one downside to this novel is that there are way too many characters. I understand that this is supposed to be a retelling but there are so many people in this story and they all have obscure names that seem too similar. I often found myself confused and I had no idea who anyone was and I had to flick to the glossary at the back of the book to familiarise myself.

I recommend this to fans of Game of Thrones. It’s violent, bloody and murderous, but it’s also addictive and wildly enjoyable. I’m looking forward to the sequel.