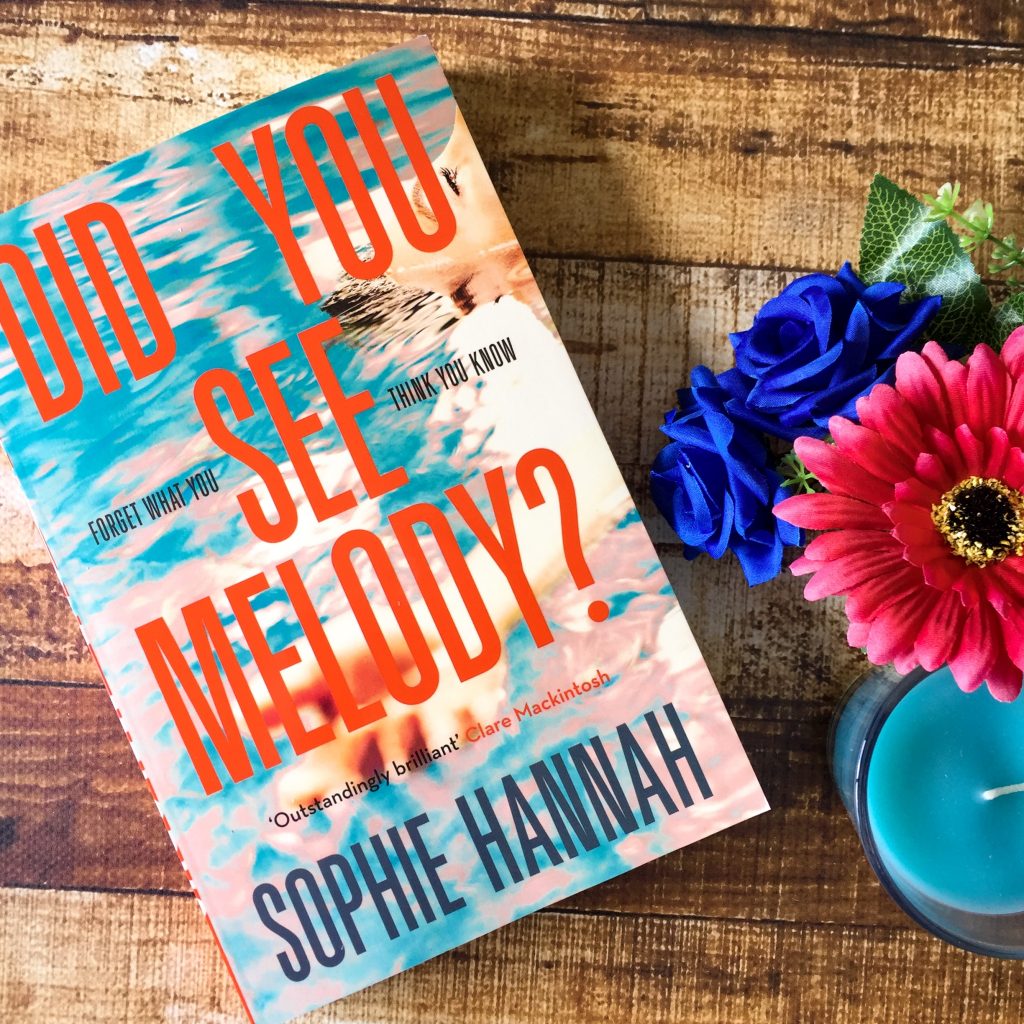 Pushed to breaking point, Cara Burrows abandons her home and family and escapes to a five-star spa resort she can’t afford. Late at night, exhausted and desperate, she lets herself into her hotel room and is shocked to find it already occupied – by a man and a teenage girl.

A simple mistake on the part of the hotel receptionist – but Cara’s fear intensifies when she works out that the girl she saw alive and well in the hotel room is someone she can’t possibly have seen: the most famous murder victim in the country, Melody Chapa, whose parents are serving life sentences for her murder.

Cara doesn’t know what to trust: everything she’s read and heard about the case, or the evidence of her own eyes. Did she really see Melody? And is she prepared to ask herself that question and answer it honestly if it means risking her own life?

Did You See Melody? is a crime novel that solves a cold case murder in the United States. Cara is swept up in the mystery when she takes some time away from her family for a break, and discovers that a young girl in the resort was supposedly murdered years earlier.

I’m going to have to walk past the two men in order to look natural. I slow my pace, hoping to hear some of their conversation, but it’s no use. The detective spotted me straight away and is saying things he’s decided it’s okay for me to hear: ‘Thanks for your help’ and ‘Worth a try, whatever the odds.’

Whilst the premise of the novel is intriguing and engaging, the characters are the weakest aspect of the novel. My favourite character was resort guest Tarin Fry because she was sharp, witty, confident and hilarious. But I felt like the other characters fell short. Bonnie Juno seemed like a stereotypical talk show host whose opinion was one-sided and whose presence in any scene was overbearing. Tarin’s daughter Zellie is spoilt and unlikable, popping up in the story when she really isn’t needed (Sophie could’ve cut her out of the story and it probably wouldn’t have made a difference).

And Cara Burrows is actually a really rubbish character — a weak, self-absorbed woman who I didn’t care for at all. She takes most of her family’s life savings and ditches them because they weren’t happy about her pregnancy. And the real reason she was unhappy was because no one asked her how she felt about the pregnancy. Any woman with a bit more backbone would’ve stood up for herself. Her whole backstory didn’t make much sense to me, and I lost respect for her within the first couple of pages:

“As I swim, I have an idea. I’m going to take some photos on the iPad Mason lent me and post them on Instagram, like I might if I were on a normal holiday, so that Jess and Olly can see I’m having a good time and there’s nothing to worry about.”

She ditches her family for two weeks but communicates with her kids via Instagram? She desperately wants to be alone for two weeks, but while she’s at the resort all she talks about is her kids and how she’s worried what they think of her. It’s kind of jolting when you’re reading it.

Another downside to the book was that it was overwritten. The first 50 pages are really slow because Sophie spends pages and pages describing the spa and the hotel. I thought I was settling in for a crime/thriller novel and yet the beginning of the book feels like a chick lit novel.

The premise of the novel is strong, and I kept reading the book because I was intrigued enough to want to find out what happens at the end. The novel switches back and forth between present day prose, to previously published newspaper articles and interview transcripts for Bonnie Juno’s show.

KH: Then, according to you, the Chapas planted the sock in Kristie Reville’s car, and also later moved it to Melody’s school bag?
BJ: Absolutely
KH: So they got lucky twice? Kristie Reville left her car unlocked twice, at two very opportune moments for Annette and Naldo Chapa?

There is a much larger mystery behind Melody’s disappearance, and it’s enjoyable reading the book trying to figure out who might be responsible.

“The sound of the key turning, the door opening: scrape, click, creak. I’ve taught myself to keep still when I hear these familiar noises. They don’t mean I’m going anywhere, or that anything will change.”

Whilst I kept reading so that I could find out the answer to the mystery, I still felt let down by this novel. I wouldn’t recommend this to crime fiction fiends. You’ll probably find yourselves disappointed. I would recommend this novel to readers who like to float between genres and aren’t too fussed with what they read, and who like a bit of mystery but aren’t overly loyal to it.