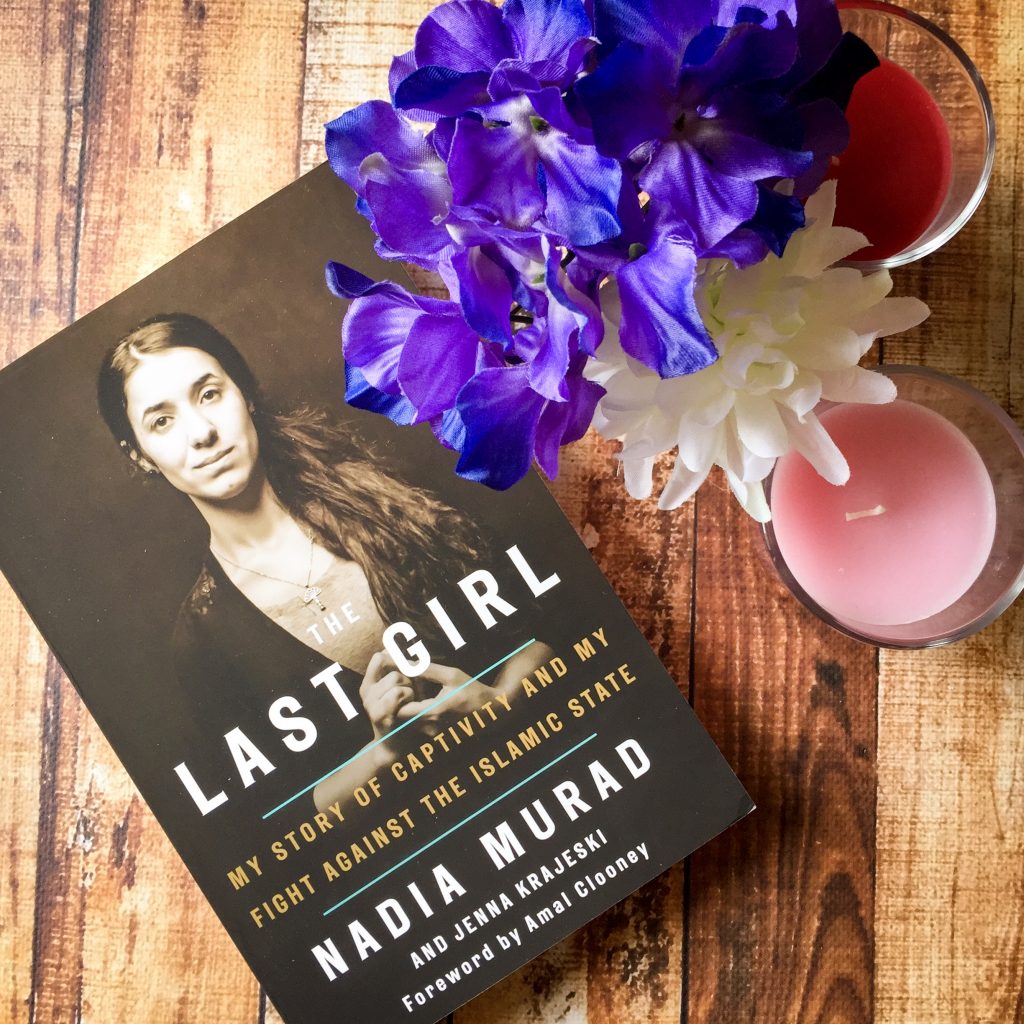 In this intimate memoir of survival, a former captive of the Islamic State tells her harrowing and ultimately inspiring story.

Nadia Murad was born and raised in Kocho, a small village of farmers and shepherds in northern Iraq. A member of the Yazidi community, she and her brothers and sisters lived a quiet life. Nadia had dreams of becoming a history teacher or opening her own beauty salon.

On August 15th, 2014, when Nadia was just twenty-one years old, this life ended. Islamic State militants massacred the people of her village, executing men who refused to convert to Islam and women too old to become sex slaves. Six of Nadia’s brothers were killed, and her mother soon after, their bodies swept into mass graves. Nadia was taken to Mosul and forced, along with thousands of other Yazidi girls, into the ISIS slave trade.

Nadia would be held captive by several militants and repeatedly raped and beaten. Finally, she managed a narrow escape through the streets of Mosul, finding shelter in the home of a Sunni Muslim family whose eldest son risked his life to smuggle her to safety.

Today, Nadia’s story—as a witness to the Islamic State’s brutality, a survivor of rape, a refugee, a Yazidi–has forced the world to pay attention to the ongoing genocide in Iraq. It is a call to action, a testament to the human will to survive, and a love letter to a lost country, a fragile community, and a family torn apart by war.

The Last Girl is the remarkable and courageous true story of Nadia Murad, a twenty-three year old Yazidi woman who is working with Amal Clooney to challenge the world to fight ISIS on behalf of her people.

“Nadia Murad is not just my client, she is my friend. When we were introduced in London, she asked if I would act as her lawyer. She explained that she would not be able to provide funds, that the case would likely be long and unsuccessful. But before you decide, she had said, hear my story.”
FOREWORD BY AMAL CLOONEY

The Last Girl is an inspiring memoir spanning quite a few years of Nadia’s life. She had a peaceful childhood in a remote village in Iraq, but then her life changed in 2014 and she was forced into the IS slave trade.

Nadia Murad’s memoir is raw and heartbreaking, illustrating the religious genocide and Nadia’s subsequent life in captivity under the Islamic State. Growing up, Nadia enjoyed her childhood in the small Yazidi community. However, surrounding them, Daesh — otherwise known as the Islamic State — were taking control of Northern Iraq. Slowly, everyone in Nadia’s village were growing terrified of what was coming. And soon, they were trapped, unable to leave their village because they knew they’d be killed.

After Nadia’s brothers and mother were killed, Nadia was forced to convert to Islam and then taken captive in Mosul by a man named Hajji Salman. Somehow, Nadia survived the daily abuse, torture and rape and was able to escape back to her family.

“In the school, we could hear the gunshots that killed the men. They came in loud bursts and lasted for an hour. Some of the women who stayed by the window said they could see puffs of dirt rising up behind the school. When it was quiet, the militants turned their attention to us.”

This memoir is told with incredible detail and emotional maturity — Nadia’s story is illustrated with emotion and reflection and extreme detail. She is able to reflect not only on her own story and her own tragedy, but also on those others around her. She is incredibly observant, and she talks about her neighbours and family and classmates and she will tell the reader about what happened to them. Over the course of this book, you find out what happened to not only Nadia, but also to her female family members.

This story covers a lot of ground. In the first few chapters of the book, Nadia seems to give a history lesson to readers. She reflects on the persecution of the Yazidis in Iraq. Nadia also talks about the background of her village and where she came from, detailing the tensions surrounding her village. She interweaves this section of the book with stories from her past and memories that she can’t quite forget.

For example, she tells a story of an American solider who gifted her a ring. She wears it everyday and loves it, but one day she loses it in the fields near her house. She is devastated. But, one year later she finds it again only to realise that her hands have grown and now the ring is too small for her. She has to sell the ring and use the money to help support her family.

The second two sections of the book are true horror, talking about Nadia’s life in captivity and the terror she faced in attempting to escape.

“ISIS held us prisoner in our homes while they carried out the genocide elsewhere in Sinjar. They didn’t have time, yet, to take care of us. They were busy confiscating Yazidi homes and filling bags with their jewellery, car keys, and cell phones; busy rounding up the Yazidis’ cows and sheep to keep as their own.”

Nadia Murad is a Nobel Peace Prize nominee and her memoir is inspiring but also incredibly heartbreaking. This isn’t an easy read, so beware of what this story is about before you head into it. It’s not only eye-opening, but incredible informative. I learnt a lot about the political turmoil and relations in Iraq, and I felt that Nadia explained things in simple terms so that the history behind her story can be understood by all readers.

This book is one of those stories that shows us what’s really happening in the world — what the media aren’t reporting on or what is slipping past us. It’s a difficult story to read, but it’s a story that’s incredibly important and harrowing. Stories like these teach us more about the world, and about the far corners of the world that some people have long forgotten.

The Last Girl: My Story of Captivity and My Fight Against the Islamic State
Nadia Murad
November 2017
Hachette Publishers Australia