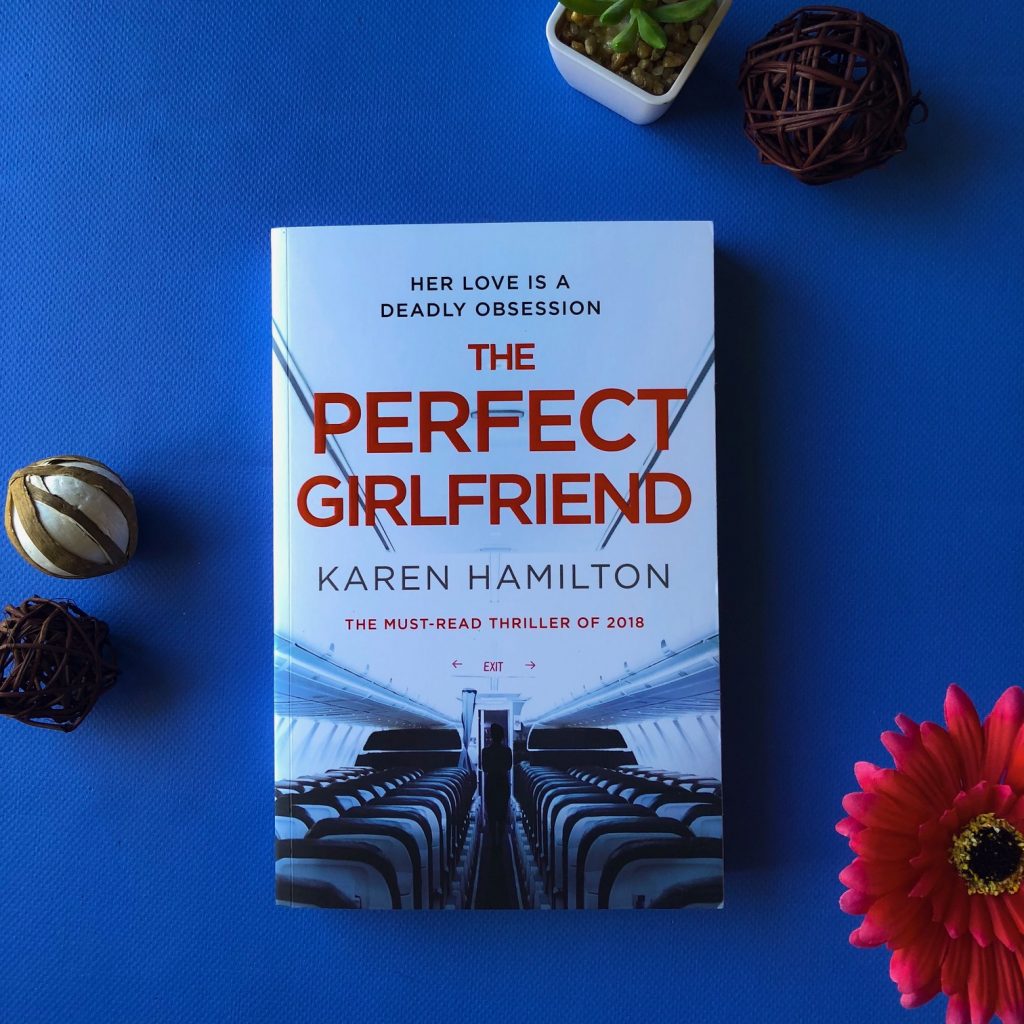 Juliette loves Nate. She will follow him anywhere. She’s even become a flight attendant for his airline, so she can keep a closer eye on him.

They are meant to be. The fact that Nate broke up with her six months ago means nothing. Because Juliette has a plan to win him back. She is the perfect girlfriend. And she’ll make sure no one stops her from getting exactly what she wants.

True love hurts, but Juliette knows it’s worth all the pain…

The Perfect Girlfriend by Karen Hamilton is a psychological thriller about a sociopathic flight attendant named Juliette Price.

Even though Nate has broken up with her, she’s created an elaborate plan to win him back. It’s twisted and sadistic, and she’s clearly deranged. But it’s actually quite a fun read — you go along for the ride, eager to see how Juliette’s crazy scheme will unfold.

The novel is both brilliant and terrifying. Juliette is so deluded that you feel sorry for her, but she’s so determined that you almost hope that she succeeds. Karen Hamilton has weaved a very intricate story to entice all readers, particularly those who loves thrillers and mysteries.

“Bedrooms are always the places I find secrets, and Amy’s is no exception. Burglars must love the general public’s lack of imagination.”

Juliette has been damaged ever since her younger brother drowned when they were kids, and Juliette has carried guilt around her entire life. Additionally, a chance encounter with Nate when they were teenagers means that she feels connected to him. So, when he dumps her after only a short time dating, she is distraught.

She remains unhinged and unpredictable throughout the entire novel, stalking Nate and breaking into his apartment. She leaves things behind to remind him of her, and carefully enacts her plan to win him back. As you can imagine, it doesn’t really go to plan.

“Miles turns over in his sleep. I should leave something in his suitcase for her to find, a little memento to make her concerned when he travels for work. Something to turn her into a neurotic woman, with less self-assurance and a little more humility.”

Gripping and addictive, the plot is fast-paced and we move through time really quickly. The book is set over the period of at least 12 months, and yet the transition between months and chapters is seamless.

I do think the book dragged on a little. The first half of the novel is careful and measured, and yet the second half seems to take a nose dive. The pace quickens and the plot becomes quite chaotic, and the narrative loses its believability. I continued reading because I wanted to find out what happened, but the actual story was quite nuts and overdramatic.

“Nate is in Shanghai. Wondering what he’s up to, I sit up, take out my phone and head for a shady spot beneath a nearby tree. I scroll. I keep expecting Nate to change his passwords. I’ll be pissed off when he does. But, as yet, I am free to keep tabs on him to my heart’s content.”

The Perfect Girlfriend explores obsession and the very thin line between love and hate. Juliette is conniving and manipulative, and this psychological thriller will entice readers and keep them on the edge until the very end.