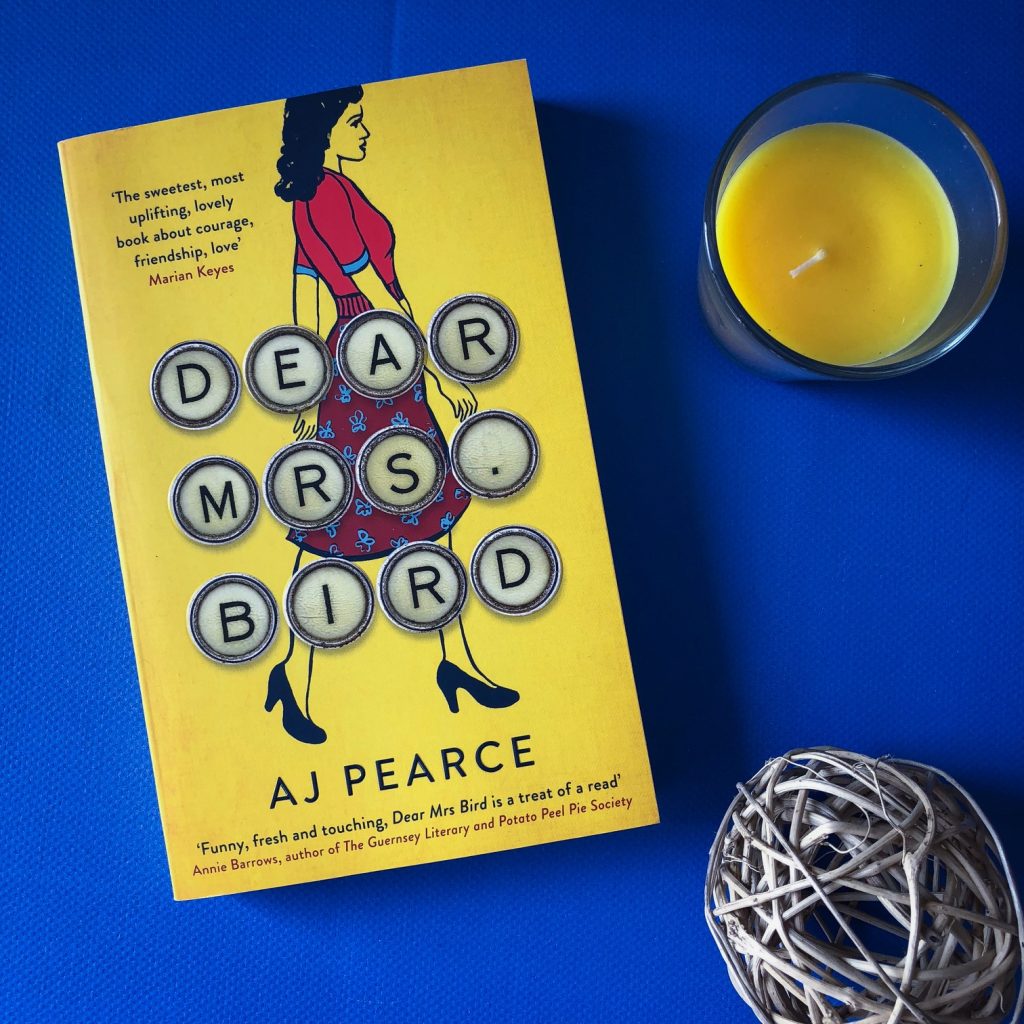 London, 1940. Emmeline Lake and her best friend Bunty are trying to stay cheerful despite the Luftwaffe making life thoroughly annoying for everyone. Emmy dreams of becoming a Lady War Correspondent and when she spots a job advertisement in the newspaper she seizes her chance – but after a rather unfortunate misunderstanding, she finds herself typing letters for the formidable Henrietta Bird, the renowned agony aunt of Woman’s Friend magazine.

Mrs Bird is very clear: letters containing any form of Unpleasantness must go straight into the bin. Emmy finds herself dismissing problems from lovelorn, grief-stricken and morally conflicted readers in favour of those who fear their ankles are unsightly or have trouble untangling lengths of wool. But soon the thought of desperate women going unanswered becomes too much to bear and Emmy decides the only thing for it is to secretly write back . . .

Dear Mrs. Bird by AJ Pearce is a warm, moving, funny tale about female friendship, courage, heroism and life in in 1940s wartime.

Emmeline Lake is a plucky young girl who desperately wants a career as a Lady War Correspondent. She’s determined and she’s confident, and she’s hired by Woman’s Friend magazine to help Henrietta Bird type letters to her readers. It’s not her ideal job, but it’s a start. The problem is that Henrietta doesn’t like ‘unpleasantness’ and so Emmeline is forced to discard the majority of the letters that they receive.

“She won’t. Oh, Bunts, you should see some of them,” I said. I really wanted her to understand. “They’re so sad. People are ever so worried about things — you’ve just said yourself about the war. Everyone’s trying their best, but some of them are in a fix. And Mrs. Bird just throws their problems in the bin. It’s not fair.”

Dear Mrs. Bird puts women in the foreground — it sheds a refreshing light on the women of wartime.

Emmeline is moved by the stories she’s hearing, and the women who are reaching out for help. Emmeline has a kind heart and wants to help others, and I think a lot of readers will find her a thoroughly enjoyable protagonist.

Dear Mrs. Bird is a really touching tale. The friendship between Emmeline and Bunty is really beautiful, and its their chemistry that drives this novel. The war does not consume these ladies’ lives — they’re concerned, yes, and cautious, but they’re also career-driven and they’re seeking a fulfilled life.

This book was (surprisingly) a favourite of mine. I loved Emmeline’s voice and her determination, and I loved the wonderful cast of characters that AJ Pearce has created.

“On nights when there wasn’t a raid, we were allowed to sleep in the volunteer room so we’d sit on our bunk beds and drink cocoa and talk nonsense. And on the nights when the raids were bad, if we had any breaks we’d talk nonsense even more to take out minds off it. Finding me a husband was perfect on that front.”

Unfortunately, the pacing is rather inconsistent — the first half of the book is really slow-moving, with the reader unsure where the story is headed. The romances are drawn out. However, the final third of the book is where most of the action happens. There’s heartbreak and tragedy and Emmeline and Bunty’s lives are turned upside down.

And then everything is resolved in a short amount of time. I think the first half of the book could’ve been trimmed or quickened, and the climax of the novel could’ve been drawn out a little more so that the reader didn’t feel like everything was moving too fast.

“In the middle of Europe being battered by a derange madman and Britain doing its best to keep the hope of a free world alive, the three of us were playing like children in the snow. For these moments it was as if nothing had changed from a time when everything was simple and Mother and Father could make anything horrid just go away.”

I’d recommend this to those of you who love women’s fiction — romance, rural romance, historical fiction. Dear Mrs. Bird is moving and fun, but it’s also got a lot of heart and romance as well. This is a story you’ll devour.