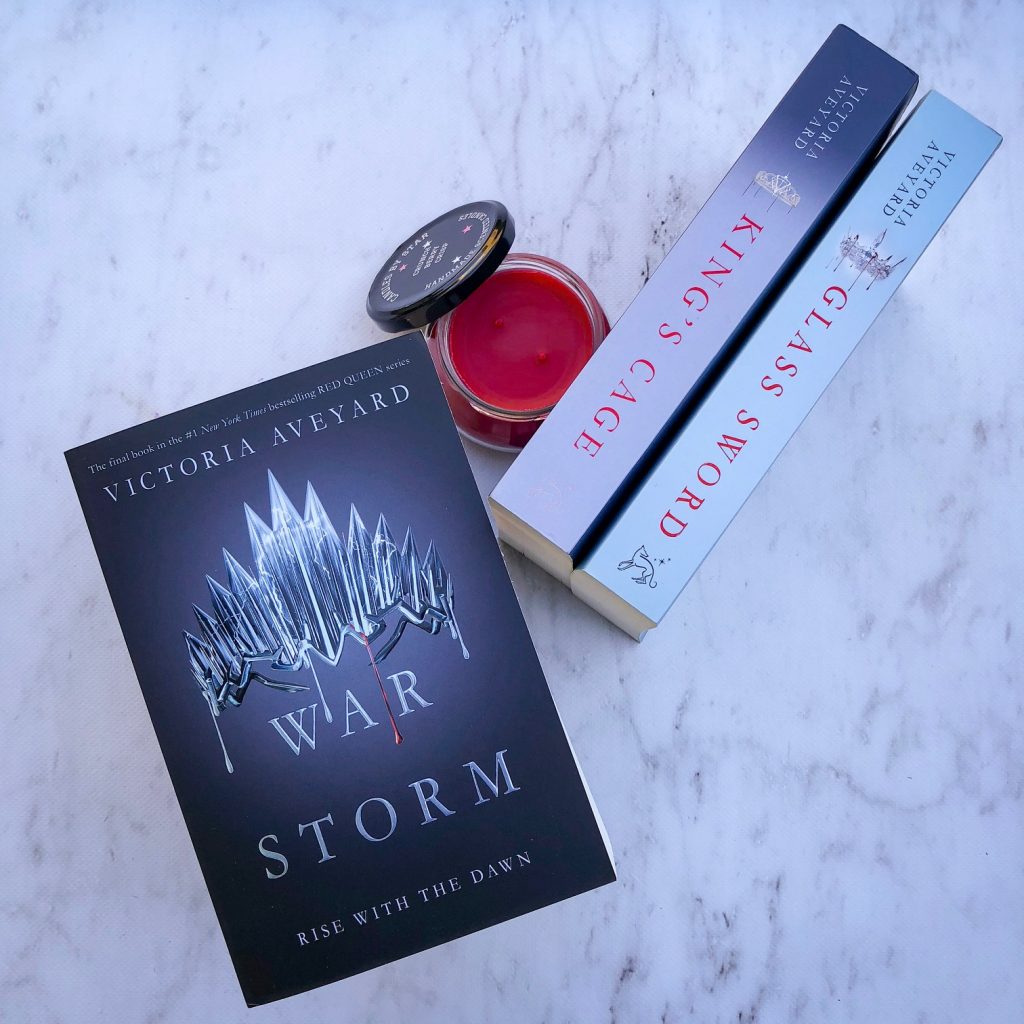 Victory comes at a price.

Mare Barrow learned this all too well when Cal’s betrayal nearly destroyed her. Now determined to protect her heart—and secure freedom for Reds and newbloods like her—Mare resolves to overthrow the kingdom of Norta once and for all… starting with the crown on Maven’s head.

But no battle is won alone, and before the Reds may rise as one, Mare must side with the boy who broke her heart in order to defeat the boy who almost broke her. Cal’s powerful Silver allies, alongside Mare and the Scarlet Guard, prove a formidable force. But Maven is driven by an obsession so deep, he will stop at nothing to have Mare as his own again, even if it means demolishing everything—and everyone—in his path.

War is coming, and all Mare has fought for hangs in the balance. Will victory be enough to topple the Silver kingdoms? Or will the little lightning girl be forever silenced?

In the epic conclusion to Victoria Aveyard’s stunning series, Mare must embrace her fate and summon all her power… for all will be tested, but not all will survive.

War Storm by Victoria Aveyard is the fourth and final book in the Red Queen series, bringing the saga to a thrilling and tense conclusion.

Clocking in at 647 pages, War Storm is an epic finale full of politics, war, schemes and new allies. The pacing wavers, but the characters are fleshed out and the tension is high. If you love this series then it’s definitely worth reading War Storm because all of the loose ends are tied up and all narratives concluded.

I’ve recently created a new rule for myself when it comes to YA series, and that’s ‘I will not go back and re-read’. I pick up the sequel and start reading, and eventually I remember what happened in the previous book.

I did that with War Storm and I found it rather easy to jump back into the series, and slowly, all of the events of the previous books came flooding back to me.

“The mountains in the distance loom closer with every passing second. They look more like a wall than any mountains I’ve ever seen. Fear tries to eat at my resolve, but I don’t let it. Instead I narrow my eyes and sharpen my focus on the task at hand, leaving little room for anything else.”

Mare has definitely matured over the course of the series, and I found her internal thoughts to be much more consistent with her characterisation. She’s smart, savvy and she’s strategic.

Evangeline is probably my favourite character in the book, because you feel sympathetic towards her and so you feel emotionally invested in her storyline.

I also think the characterisation of Iris is fantastic — she’s a total badass. She puts herself first and even though she has no regard for anyone other than her family; she really helps propel the story forward and keep the reader guessing.

“The interior fort is an experiment in chaos. By now Cal will have begun his own assault, marching his battalion up and out of the tunnel system Harbor Bay is built on. It is an old city, well preserved through the ages, with deep and twisting roots. The Scarlet Guard knows them all.”

The plot is a little chaotic in the book, so you aren’t too sure where it’s headed. It’s a really long read, and the story drawn out. I think the pacing could’ve been tightened in the middle of the book, because I did feel really exhausted by the time I reached the end of the novel.

In saying that, the conclusion did feel a little rushed and quiet. I was expecting a big showdown between Cal and Maven, but after hundreds of pages of slow pacing, the final conflict in the book wrapped up rather quickly.

“The snarl of transports echoes outside the holding bunker. The soldiers must have returned, and I wonder if they managed to track down anyone in the swamps. The noise filters through the high windows cut into the concrete slab walls. The room is cool, partially underground, bisected by a long aisle dividing two rows of barred cells.”

When sequels come out so far apart, it’s hard to remember everything and if you choose not to go back and re-read like me, then you feel like you’re treading water for 100 pages just trying to remember what’s been going on up until the start of the book.

Readers will only pick this up if they’ve read the first three books in a series, but I would recommend this series to young readers who love fantasy books. Now that the series is complete, you can pick up all of the books and read everything closely together.