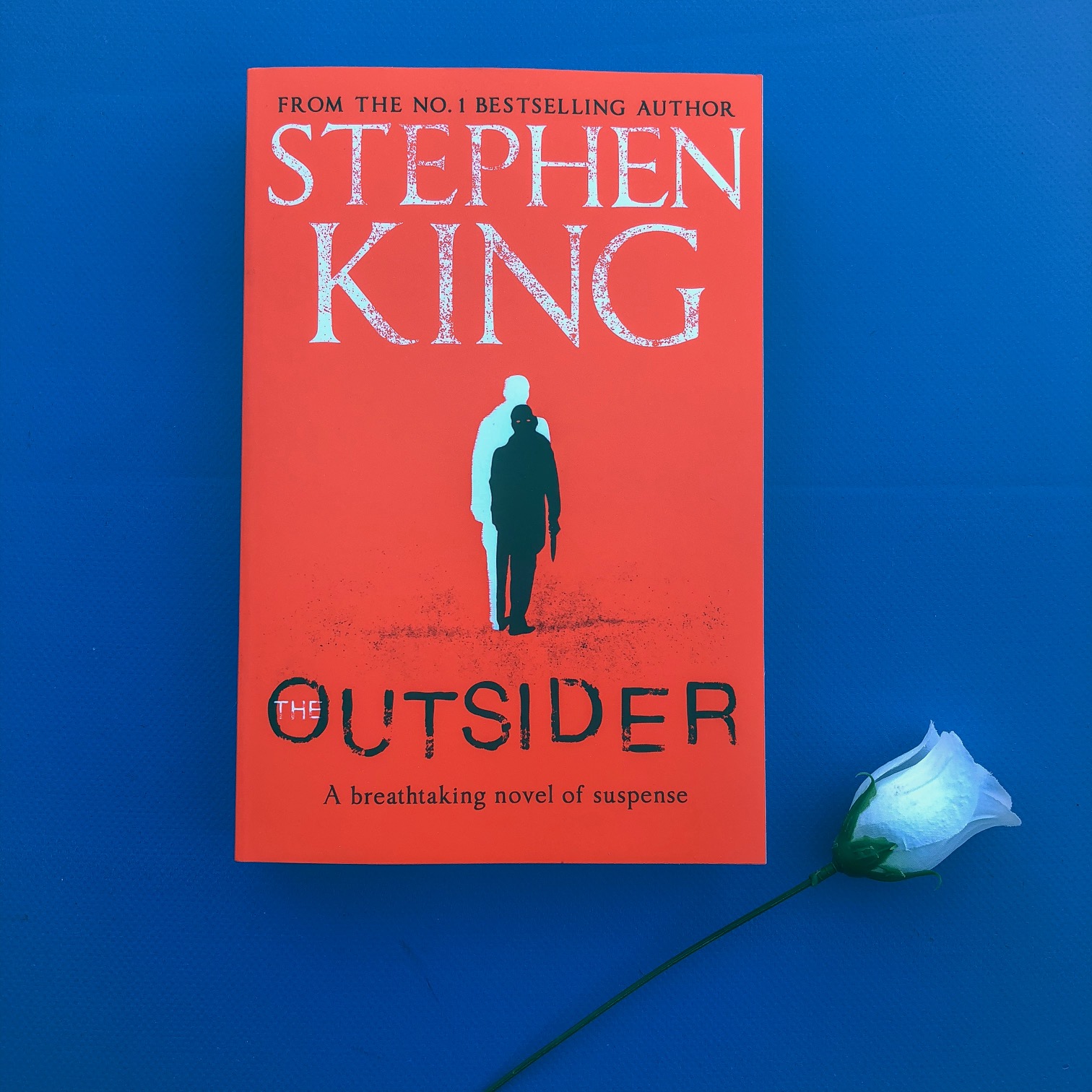 When an eleven-year-old boy is found murdered in a town park, reliable eyewitnesses undeniably point to the town’s popular Little League coach, Terry Maitland, as the culprit. DNA evidence and fingerprints confirm the crime was committed by this well-loved family man.

Horrified by the brutal killing, Detective Ralph Anderson, whose own son was once coached by Maitland, orders the suspect to be arrested in a public spectacle. But Maitland has an alibi. And further research confirms he was indeed out of town that day.

As Anderson and the District Attorney trace the clues, the investigation expands from Ohio to Texas. And as horrifying answers begin to emerge, so King’s propulsive story of almost unbearable suspense kicks into high gear.

Terry Maitland seems like a nice guy but there is one rock-hard fact, as unassailable as gravity: a man cannot be in two places at the same time. Can he?

The Outsider by Stephen King is a thriller about the gruesome murder of an eleven year-old boy in America. The novel moves across States, taking the reader from Ohio to Texas. We follow Detective Ralph Anderson as he seeks answers to some pretty impossible questions.

Stephen King captures the reader’s attention right from the first chapter. In the beginning, the novel switches from standard prose to transcript format between detectives and members of society. A little boy has been gruesomely murdered and it’s pretty clear that much-loved Little League coach Terry Maitland is the culprit.

But it is only after Ralph Anderson arrests Terry that doubt starts to descend. Evidence has proven that Terry was away the day the little boy was murdered. But eye witness testimonies also suggest that Terry was in town. So, who really murdered the boy?

The Outsider takes place over a two-week period, covering the arrest of Terry Maitland and the ensuing investigation. There are a cast of characters in this novel, and Stephen King does a masterful job of bringing them to life. Whilst dialogue may not be Stephen King’s strong suit, the characterisation draws the reader in and keeps them intrigued.

Stephen’s novel apparently features characters and references characters from his Hodges Trilogy, but I actually haven’t read those ones so I didn’t pick up on that until I’d completed the novel. If anyone’s wondering, you can read this as a standalone.

“Terry put them out and watched as a new pair of handcuffs was snapped onto his wrists. He looked for Howie, suddenly as anxious as he had been at five, when his mother let go of his hand on his first day of kindergarten.”

My issue with this novel is that Stephen King sets up the storyline to be something of reality. A boy is murdered, and you read the novel thinking someone in the town has committed the crime. However, at least halfway through the novel, supernatural and paranormal elements are thrown into the story and the culprit is something not of this world.

I couldn’t help but feel cheated. With shows like Supernatural, and books of a similar nature, you know straight away that the crime is of a paranormal nature and that the characters will work to find out who or what committed the crime.

However, Stephen King set this up to look like a regular ‘who dunnit’ story. And finding out that the killer is a supernatural creature from a long forgotten legend, you can’t help but feel played. Part of the fun of reading a crime or thriller novel is guessing what you think happened and then reading the novel to find out if you were correct. But finding out near the end that it’s a supernatural, totally-impossible-to-guess creature? It’s a pretty big letdown.

“Was he looking for Mr Maitland specifically, or could it have been anyone? I don’t know for sure, but I think he had Terry Maitland in his sights, because he knew the Maitlands were visiting from another state, far away. The outsider, whether you call him natural or unnatural or supernatural, is like many serial killers in one way. He likes to move around.”

The Outsider is a pretty big investment of a read — 475 pages. Crime and thriller fans will love this novel, but beware that you won’t be able to guess the ending. It’s not the simple ‘crime and prosecution’ that the first half of the novel suggests. There are many twists and turns.