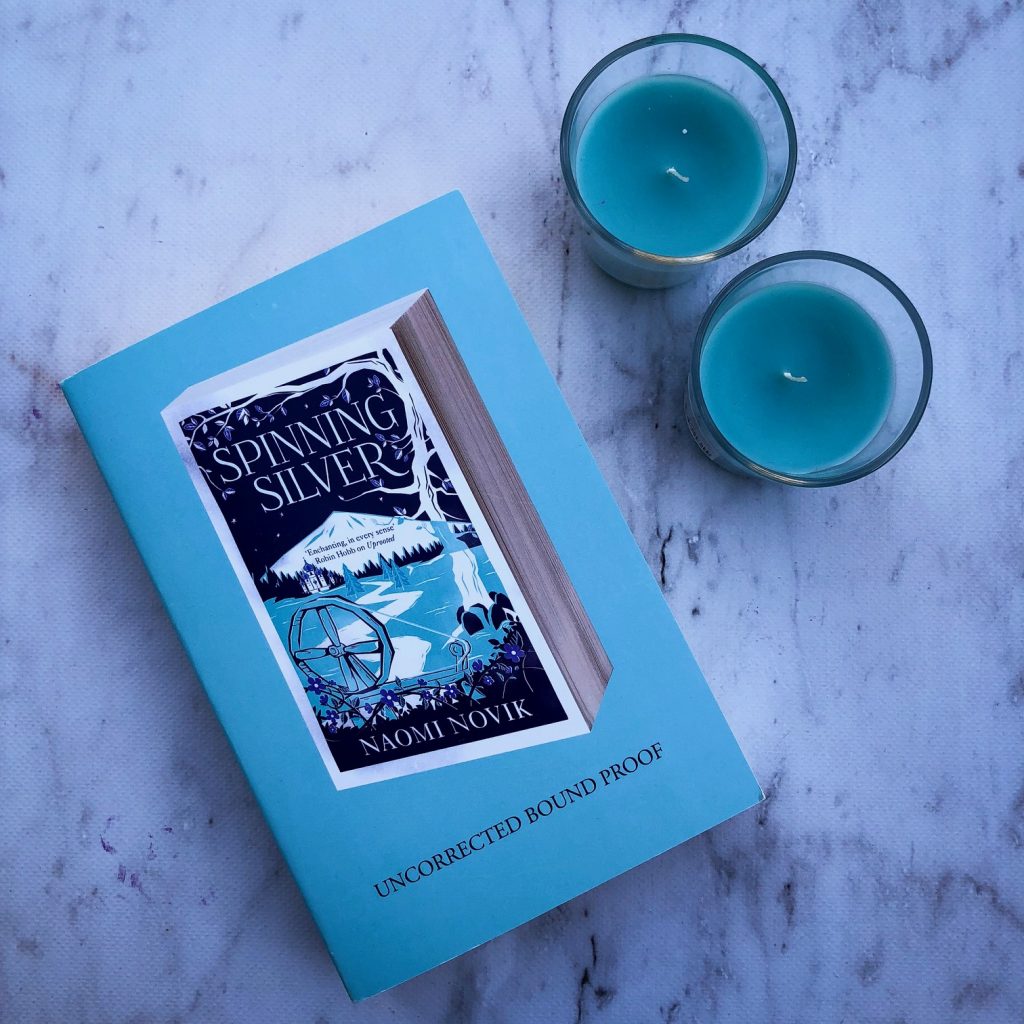 Miryem is the daughter and granddaughter of moneylenders, but her father is not a very good one. Free to lend and reluctant to collect, he has left his family on the edge of poverty – until Miryem intercedes. Hardening her heart, she sets out to retrieve what is owed, and soon gains a reputation for being able to turn silver into gold.

But when an ill-advised boast brings her to the attention of the cold creatures who haunt the wood, nothing will be the same again. For words have power, and the fate of a kingdom will be forever altered by the challenge she is issued.

Spinning Silver by Naomi Novik is an epic fantasy novel with a new take on the classic fairytale Rumpelstiltskin. At almost 500 pages, Spinning Silver follows over six different characters and their intertwined stories. It’s a grand story, slow-paced and meant to be savoured by the reader.

The world is enchanting and the setting so vivid. This may be loosely based on Rumpelstiltskin, but it reads more like an original fantasy story. With a girl who can turn silver into gold and a King who can stretch Winter for years, the premise is incredibly intriguing to any reader. There are also many underlying themes to the novel that readers will be able to recognise.

The first half of the novel is stronger than the second half, where the pacing slows dramatically and the events in the book seem a little absurd. However, Naomi’s writing is poetic and magical. The prose flows, and the description is detailed and really evokes a strong image for the reader. I could feel the cold and the Winter, and my stomach ached just reading about how impoverished, poor and hungry these characters were.

“I didn’t try to sew. I had a book from off my father’s shelf in my lap, a rare pleasure I couldn’t enjoy. I stared down at the painting of the storyteller and the sultan, a thready shadow-creature taking shape out of the smoke of the brazier between her weaving hands, and I couldn’t even reach the end of a sentence.”

I have mixed feelings about this title. On the one hand, I love retellings. And I adore the story of Rumpelstitzkin and how creative Naomi was in her retelling. However, the pacing is slow and there are too many characters to try and keep track of, and I actually felt really exhausted by the end of the book.

I read an ARC of the book, so perhaps this is different in the final edition, but each section of the book doesn’t say whose POV it is. There are little illustrations used for each character POV, but with so many characters, I couldn’t remember which image belonged to whom, and so whenever the POV shifted it took me a good couple of paragraphs before I knew for sure which character we were now following along with.

It really confused me, and I hope the final edition at least has headings with the character’s name so the reader can follow along easily.

Additionally, I still don’t think I fully understand how the world works? I understand the prolonged Winter and the relationship between all of the characters, and the plot is easy to follow. But I felt like some events in the story weren’t realistic, but were in fact there because Naomi was trying to keep remnants of the original Rumpelstiltskin story in place.

“There was a lot of snow in the yard. I shovelled some of it into big heaps so the goats and chickens could get to the grass. The ground was frozen, but I took out the nut from the white tree and looked at it and wondered if maybe I should plant it here.”

This story is for fans of epic fantasy tales — for readers who will stick with a long story, even if the pacing is quite slow and the world-building a little hard to grasp. It’s not my favourite retelling, but I did keep reading because I was invested in the characters and their individual stories.