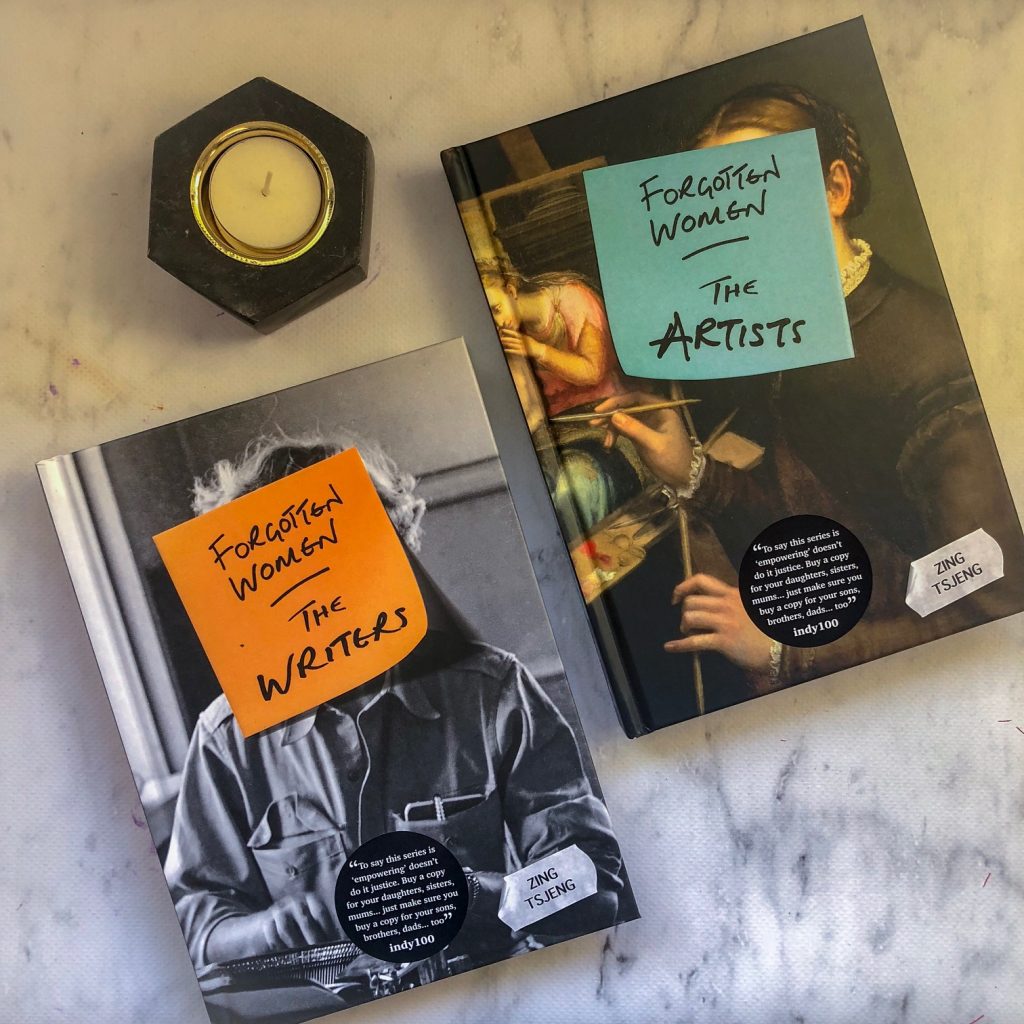 The Writers celebrates 48 unsung genius female writers from throughout history and across the world, including the Girl Stunt Reporters, who went undercover to write exposes on the ills of 1890s America; Aemilia Lanyer, the contemporary of Shakespeare whose polemical re-writing of The Bible’s Passion Story is regarded as one of the earliest feminist works of literature; and Sarojini Naidu, the freedom fighter and ‘Nightingale of India’ whose poetry echoed her political desire for Indian independence.

Including writers from across a wide spectrum of disciplines including poets, journalists, novelists, essayists and diarists, this is an alternative gynocentric history of literature that will surprise, empower, and leave you with a reading list a mile long.

The Artists brings together the stories of 48* brilliant woman artists who made huge yet unacknowledged contributions to the history of art, including Camille Claudel, the extraordinarily talented sculptor who was always unfairly overshadowed by her lover, Rodin; Baroness Elsa von Freytag-Loringhoven, who has been claimed as the true originator of Marcel Duchamp’s Fountain; and Ana Mendieta, the Cuban refugee who approached violence against women through her performance art before her own untimely death.

With chapters ranging from Figurative to Photography, and Craft to Conceptual, this is an alternative guide to art history that demonstrates the broad range of artistic movements that included, and were often pioneered by, female artists who have been largely overlooked.

The Writers and The Artists are the third and fourth books in the Forgotten Women series, each book focusing on a selection of women who shaped our history but whose contribution has largely been forgotten. Each book celebrates 48 women who were influential and inspiring. They made significant contributions to history.

This series is a favourite of mine. Earlier in the year, I read and reviewed the first two books in the series: The Leaders and the Scientists.

Each book is a beautiful hardback, with gorgeous illustrations to accompany each entry. I love that each women is dedicated approx. 2-3 pages for her story, because this allows us to understand who she was but at the same time, we aren’t bogged down with excess detail. This allows for a quick read.

“With William’s support, Margaret Cavendish was able to publish her own work, which included everything from philosophical treatises to plays and poetry. At a time when most female authors wrote anonymously, Margaret published under her own name.”

Readers of different ages, genders and backgrounds will find inspiration in these pages. The women were courages and ahead of their time, and their art and their words made a lasting impact on society. A lot of the women in these books I’d never heard of before, and it was great to discover and read about these amazing women from history.

Marjorie Cameron was a Los Angeles occultist who was known for her Surreal paintings that conjured up Jungian myth and aliens in coitus; Alma Thomas began painting vivid, abstract works after she retired at the age of 69; Carolina Maria De Jesus was a Brazilian writer and her country’s first black author.

“At the time, women were not allowed to make a living from their painting, but this was not for the reasons you might expect. The Qing dynasty believed that the greatest art was created only by educated amateurs who painted in the privacy of their home for leisure and enjoyment, and didn’t seek to profit from it like common tradesmen.”

Readers will find the Forgotten Women series a delight, the pages filled with gorgeous illustrations and remarkable stories.