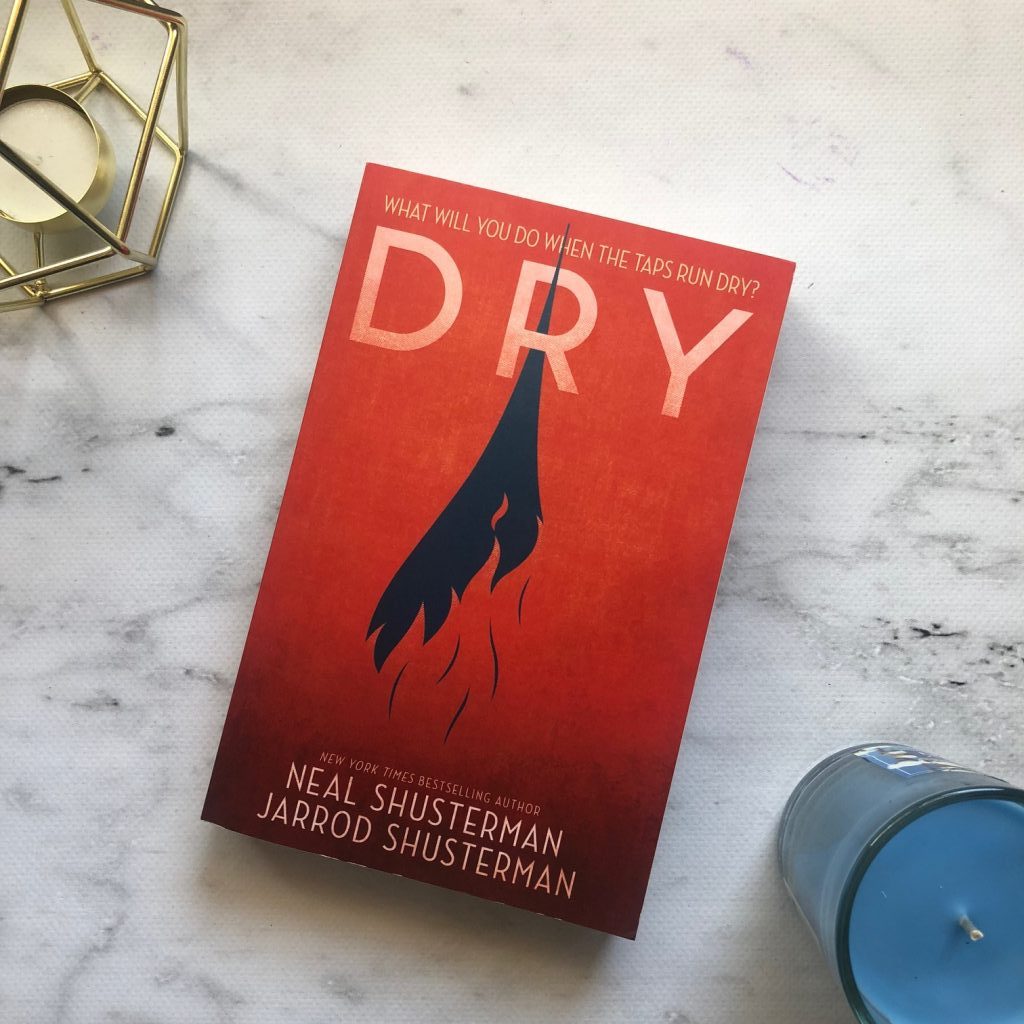 When the California drought escalates to catastrophic proportions, a group of teens is forced to make life and death decisions in this harrowing story of survival from New York Times bestselling author Neal Shusterman, and Jarrod Shusterman.

The drought – or the Tap-Out, as everyone calls it – has been going on for a while now. Everyone’s lives have become an endless list of don’ts: don’t water the lawn, don’t take long showers, don’t panic. Until the taps run dry.

Suddenly, Alyssa’s quiet suburban street spirals into a warzone of desperation; neighbours and families turned against each other on the hunt for water. And when her parents don’t return, she and her younger brother must team up with an unlikely group in search of water. Each of them will need to make impossible choices to survive.

Dry is a young adult novel that explores what would happen to civilisation if there was no water left. Written by father-son team Neal & Jarrod Shusterman, Dry is dedicated to those affected by climate change and this book does a fabulous job of showing us the harsh reality of climate change and our possible future with no clean drinking water.

Over time, water has become more and more limited until all of a sudden there’s just none left. The book may be set in Southern California, but readers all over the world will be able to recognise elements of their own town within the pages of this book.

Reading Dry can really cause the reader to feel hydrated and be thankful for any drop of water they have near them.

“We search the surrounding streets for the BMW, all the while my fever making me feel even more miserable. We pass vacant storefronts and small parking lots, and I’m pressing the panic button the keys, but with no luck.”

The book switches POV between quite a few people. We have 16 year old Alyssa, the main character, who is fair, trustworthy and moral. She’s in charge of her 10 year old brother Garret when their parents go missing.

They team up with their neighbour Kelton. He was one of my favourite characters. His dad is a really big ‘prepper’ for the end of the world and he’s unfair, selfish and when the taps run dry he doesn’t want to share any water with anyone else. As a result, catastrophic events ensue.

Along the way, the group also join forces with the brazen and terrifying Jacqui and the incredibly cunning and conniving Henry. Together, these teenagers embark on a road trip across Southern California in an attempt to find their family, food, water and a place to ride out the disaster until help arrives.

As you can imagine, things go wrong and tensions rise among the characters. Some of them bond over the course of the novel, but a couple of them are still very much flawed by the end.

“I grab Kelton under the shoulders and pick him up. I shoot a glance to Garrett, who’s been hiding, crouched by a sofa. We drag Kelton down the hall toward the front door, Alyssa leading the way. As we make our way there, I try to take stock of what’s actually happening around us, but it’s too dark — just shapes and outlines.”

Dry is a gripping read, with heightened stakes and a fast-paced plot, and an incredibly believable premise. The book shows us how desperate people can get when they think they might be dying, and how quickly members of the public can panic and turn on one another.

This may be promoted as dystopian fiction, but it could well be a prediction of the future.

I don’t think the multiple POVs were necessary to the book, and I would’ve been perfectly content if there were only a couple of character perspectives used.

Despite that, I highly recommend this novel, particularly for any readers who love near-future or apocalyptic-style plots.