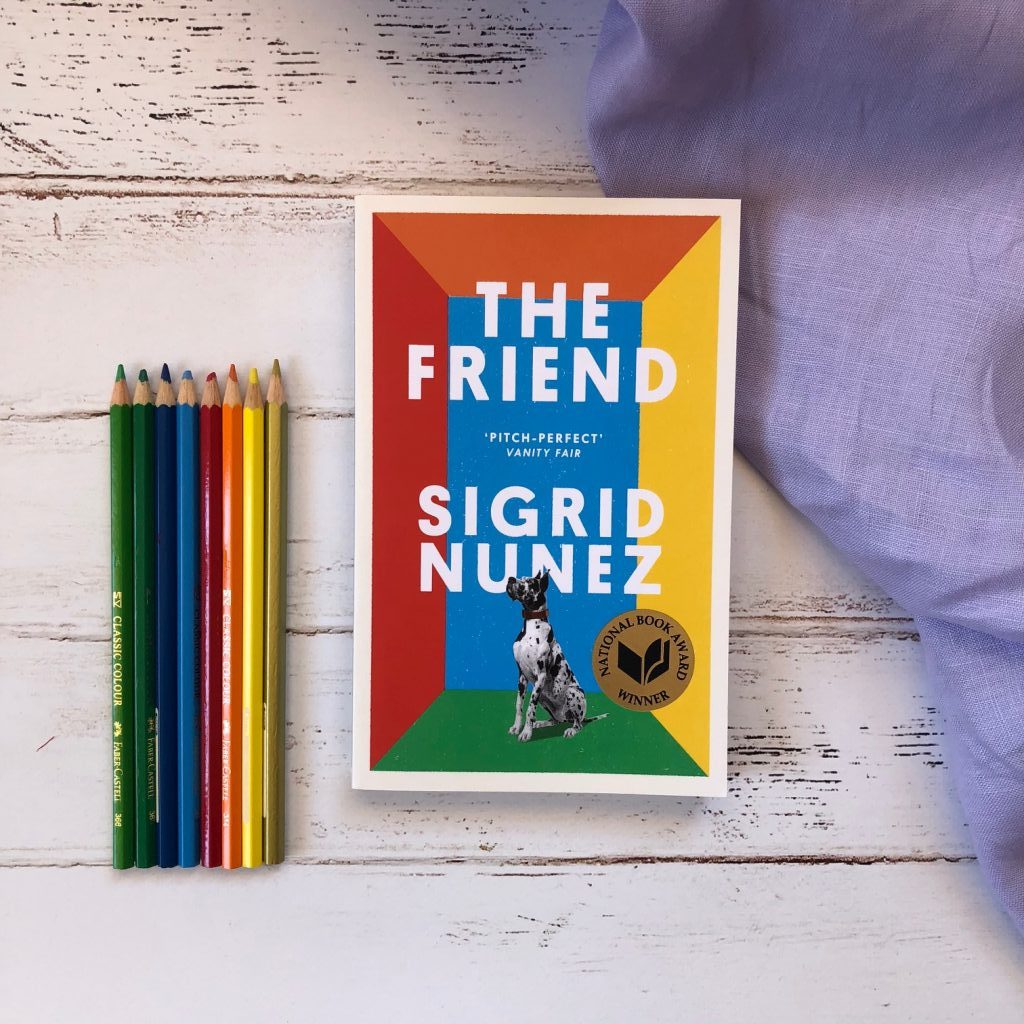 A moving story of love, friendship, grief, healing, and the magical bond between a woman and her dog.

When a woman unexpectedly loses her lifelong best friend and mentor, she finds herself burdened with the unwanted dog he has left behind. Her own battle against grief is intensified by the mute suffering of the dog, a huge Great Dane traumatised by the inexplicable disappearance of its master, and by the threat of eviction: dogs are prohibited in her apartment building.

While others worry that grief has made her a victim of magical thinking, the woman refuses to be separated from the dog except for brief periods of time. Isolated from the rest of the world, increasingly obsessed with the dog’s care, determined to read its mind and fathom its heart, she comes dangerously close to unravelling. But while troubles abound, rich and surprising rewards lie in store for both of them.

Elegiac and searching, The Friend is both a meditation on loss and a celebration of human-canine devotion.

In The Friend by Sigrid Nunez, the unnamed female narrator inherits a Great Dane named Apollo after her friend, fellow writer, and former mentor commits suicide. She lives in a 500-square-foot Manhattan apartment, is not allowed to own a dog in the apartment, and it also a self-confessed cat person.

The book is written in second person, directed at the friend who committed suicide, and is the perfect example of when an author executes second person really well in literature.

“Mostly he ignores me. He might as well live here alone. He makes eye contact at times, but instantly looks away again. His large hazel eyes are strikingly human; they remind me of yours… Having your dog is like having a part of you here.”

Suicide is mentioned sporadically, in tune with a human’s tendency to think through issues at different times of the day and in spurts. The narrator will wonder about her friend’s death, and his decision, for a moment or two, and then her thought process will switch to something else. Sigrid has captioned the human experience very well, particularly through the narrator’s internal dialogue.

The tone of the book is mournful, soulful, and rich with remembrance. The narrator is trying to come to terms with her friend’s death, and at times, the reasons behind it. The book shows great friendship between the narrator and her mentor. The two had a long history together, at one point they were intimate but mostly it was just a long-lasting and strong friendship.

At first, Apollo is a burden to the narrator. She takes him reluctantly. The dog is going to cause the narrator to get evicted from her apartment and whenever she leaves the dog for too long, she comes back to find him anxious and depressed. But over time, and particularly in the final third of the book, their friendship and understanding develops and she sees Apollo as a companion.

The fact that Apollo is the only character in the book who is named shows great significance.

“When you’re lying in bed full of night thoughts,” she thinks, “such as why did your friend have to die and how much longer will it be before you lose the roof over your head, having a huge warm body pressed along the length of your spine is an amazing comfort.”

The book is as much about Apollo as it is about writers and writing, since the unnamed narrator is a writer and a writing tutor. She is often disappointed in what her students produce, and addresses her friend when she talks about the quality of the work she’s reading.

At times, the book feels like a blend between fiction and memoir, since Sigrid Nunez is a very accomplished author who may have once grappled with questions surrounding the nature writing that our unnamed narrator does.

The narrator’s friend was a writer and a writing professor, and he was far from perfect. You learn about his multiple marriages and his womanising. He was charming, but he was also a sexist man. He often slept with his female students, of which our narrator was one. His ex-wives, and the narrator’s interactions with them, all give the reader insight into what the character was like and how he affected those around him.

Our narrator doesn’t forget these things. She knows he was flawed, and he made mistakes. But she was also his friend and she loved him. She doesn’t make excuses for him, and quite a few times throughout the book she expresses her anger at him for what he was like when he was alive.

“I am left thinking about the mastiffs. Besides their great bulk and a mane that makes them look part lion, they are known for being fiercely protective and loyal to their masters. So what does a doh bred for those traits feel when its master lets it be herded onto one of those transport trucks? Does a dog understand betrayal?”

The book explores despair, but also understanding and hope. The character doesn’t understand — and didn’t foresee — her friend committing suicide and must learn to accept that she can’t change what happened.

Recommended for literary fiction lovers. Despite being well-written, the book does read a little dry at times and I feel this is a book best discovered by seasoned readers. There isn’t much plot in the book, so it’s really read for the narrative voice and the writing and the relationship between the narrator and her dead friend, and now her relationship with his dog.