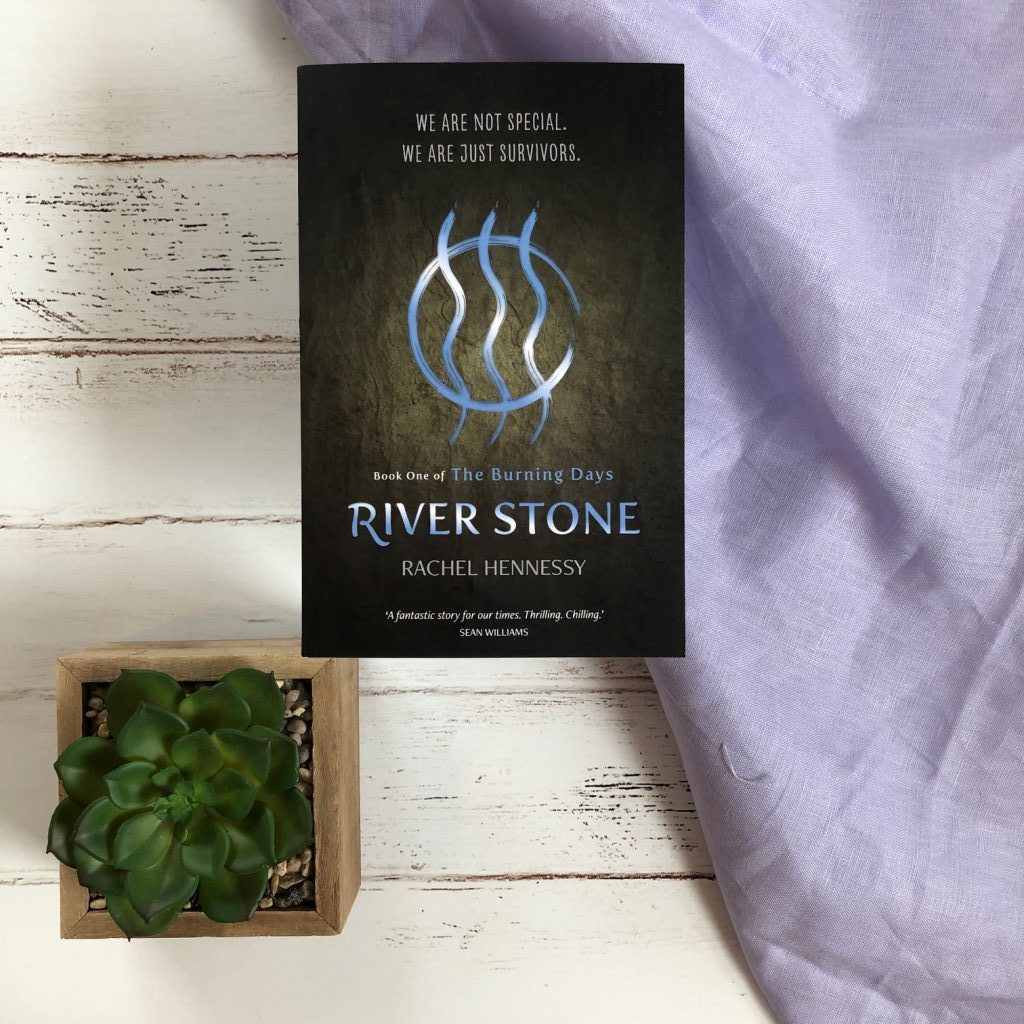 Pandora, of the River People, wants more than her village can provide. When disaster comes to her people, Pan has the opportunity to become their saviour and escape her inevitable pairing with life-long friend Matthew. She wants to make her own choices. Deep in her soul, she believes there is something more out there, beyond the boundaries, especially since she encountered the hunter of the Mountain People.

A story of confused love, difficult friendships and clumsy attempts at heroism, Pan’s fight for her village will bring her into contact with a whole new world, where the truth about the past will have terrifying reverberations for her people’s future survival.

River Stone is the first book in a new dystopian YA series from Australian author Rachel Hennessy. The story is about survival and bravery, but it’s also about family, legacy and expectation.

At first, I thought The River People were a cult. The village is small, ruled by a male elder, and teenagers are told who they are to be paired with. They don’t get to choose who to have children with, and who or what they want isn’t really taken into consideration.

It all seemed very cultish, and I guess it kind of is, but in a dystopian setting. Most of the world was wiped out after a mysterious virus started infecting people, and The River People are just doing their best to survive and continue procreating so that they don’t die off. In the blurb, it says “when disaster comes to her people”, and I half expected that to be a mass suicide like you see in cults, but I was just overthinking it. Pandora’s people are struck down with the mysterious virus and it’s up to Pandora and her friends to travel into the city and find the cure.

“Caro chews on a large piece of meat. He and Bayat have prepared a piece of the cougar on a long, whittled spear which they’ve placed over there pit, held up by two forked branches driven into the ground. They have turned it sporadically over the course of the afternoon and then carved slices off it.”

Pandora has to navigate this new world if she’s going to succeed. But she also has to navigate a love triangle, and the group of friends she’s traveling with. Tensions rise and friendships are damaged.

“At the very least, the training had ensured I could just keep up with Bayat and as we sped along the path to the caves, I realised my muscles were stronger than they’d ever been.”

As an adult, I picked up on a few things about the plot that I thought could’ve used some work. Firstly, there’s a lot of travel involved in this book, which is something most commonly seen in the second book of a series. Travel is very important in fantasy or dystopian fiction, but it can also be a little boring. I certainly felt like the travelling in River Stone could’ve been condensed, or sped up.

Secondly, I found it awfully convenient how easy it was for Pandora and her friends to gain the Mountain People’s trust. Things seemed quite….easy for the team. They’re trained in both information and combat, and they’re given pretty much everything they need to succeed in their mission. It seemed a little unrealistic.

But, I’m an adult. Whilst I certainly think teenagers are at risk of getting bored of the travelling, I don’t think Pandora’s quick connection with the Mountain People will deter young readers.

River Stone entertained and intrigued me enough to want to read the sequel. The premise is refreshingly unique, and whilst the plot is a little slow at times, and the pacing lagging, I think teen readers will be enthralled by the story. I recommend this for readers aged 11-15.