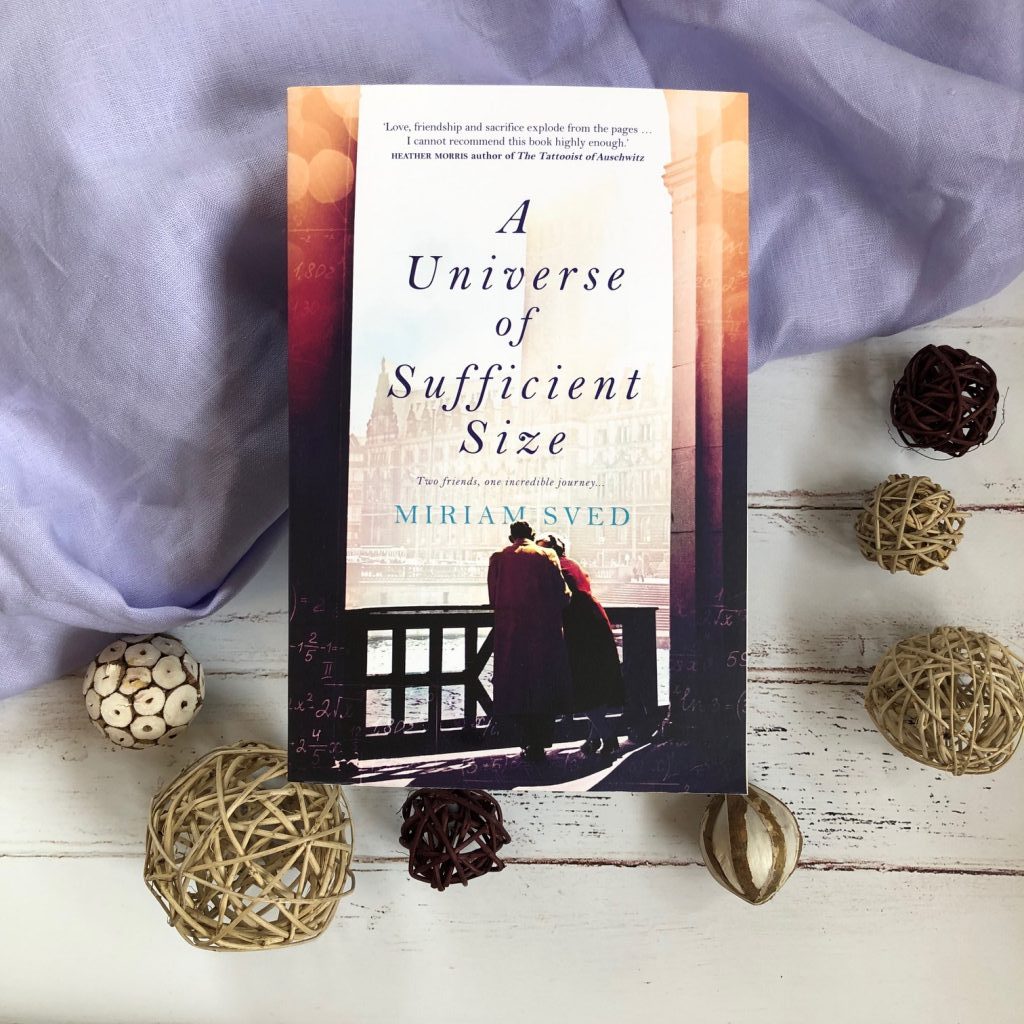 I have wished so many times that I had acted differently.
I wish that I had been more worthy of you…
Eventually the war will end, and then we will find each other.
Until then, remember me.

Sydney, 2007. Illy has just buried her father, a violent, unpredictable man whose bitterness she never understood. And now Illy’s mother has gifted her a curious notebook, its pages a mix of personal story and mathematical discovery, recounted by a woman full of hopes and regrets.

Inspired by a true story, Miriam Sved’s beautifully crafted novel charts a course through both the light and dark of human relationships: a vivid recreation of 1930s Hungary, a decades-old mystery locked in the story of one enduring friendship, a tribute to the selfless power of the heart.

A Universe of Sufficient Size by Miriam Sved is a literary novel that takes the reader through multiple narratives — pre-war Hungary in 1938, Brooklyn in 1950 and Australia in 2007. It’s a complex and tender novel that I couldn’t help but adore.

The book explores trauma, war, family and relationships, but it’s also about a devoted group of young Jewish mathematicians in 1938 and how their choices and decisions shape not just their future, but their families’ futures decades later. Mathematics is one of the strongest links between the two timelines, connecting two major characters and allowing them to bond over their shared love and knowledge.

There’s a fair bit of detailed mathematics in the book that I didn’t understand, so I developed a habit of skipping over it. I imagine most readers would do the same, given that many people won’t understand the complex equations and formulas that the characters are discussing. But Miriam takes something that many people would find uninteresting — mathematics — and weaves a story that’s inviting and evocative.

“The day the photo was taken was stamped bright in my memory: an early autumn day in our first weeks at the university. We went on a hike in the hills around Buda: not just the five of us but the whole large crowd in which we moved during those week. I felt very glum around that time.”

The characters are one of the biggest strengths in the book. They’re three-dimensional, relatable, engaging and Miriam Sved has crafted a book that completely draws you in.

In 1938, Europe is engulfed by Nazism and they’re on the brink of war. These Jewish university students don’t quite realise just how much their lives are going to change. They’re experiencing a shift in how they’re being treated and what they’re allowed to do because of the Hungarian government’s anti-Jewish laws, but of course they don’t realise the scale of change that’s coming. They’re idealistic, hopeful, and actually really naive.

There was a small flaw I couldn’t help but come across in the story. Every now and then there was something in the 2007 timeline that didn’t quite work with the time period. For example:

“Josh strokes the phone screen. If he could just get the phone out of his pocket and download some more apps — there’s supposedly one for Myspace and another for Facebook — he might even be able to update his page here and now without leaving the reception.”

I’m fairly certain apps didn’t exist in 2007, much less the ability to download an app on an iPhone. In fact, The App Store wasn’t launched until July 2008. I’m not even sure if Myspace had its own app until much later on.

Despite this, I really enjoyed the novel. I’d recommend this book to anyone with a particular
interest in wartime novels — novels about love during difficult times, and how circumstance plays a
huge role in friendships and relationships.