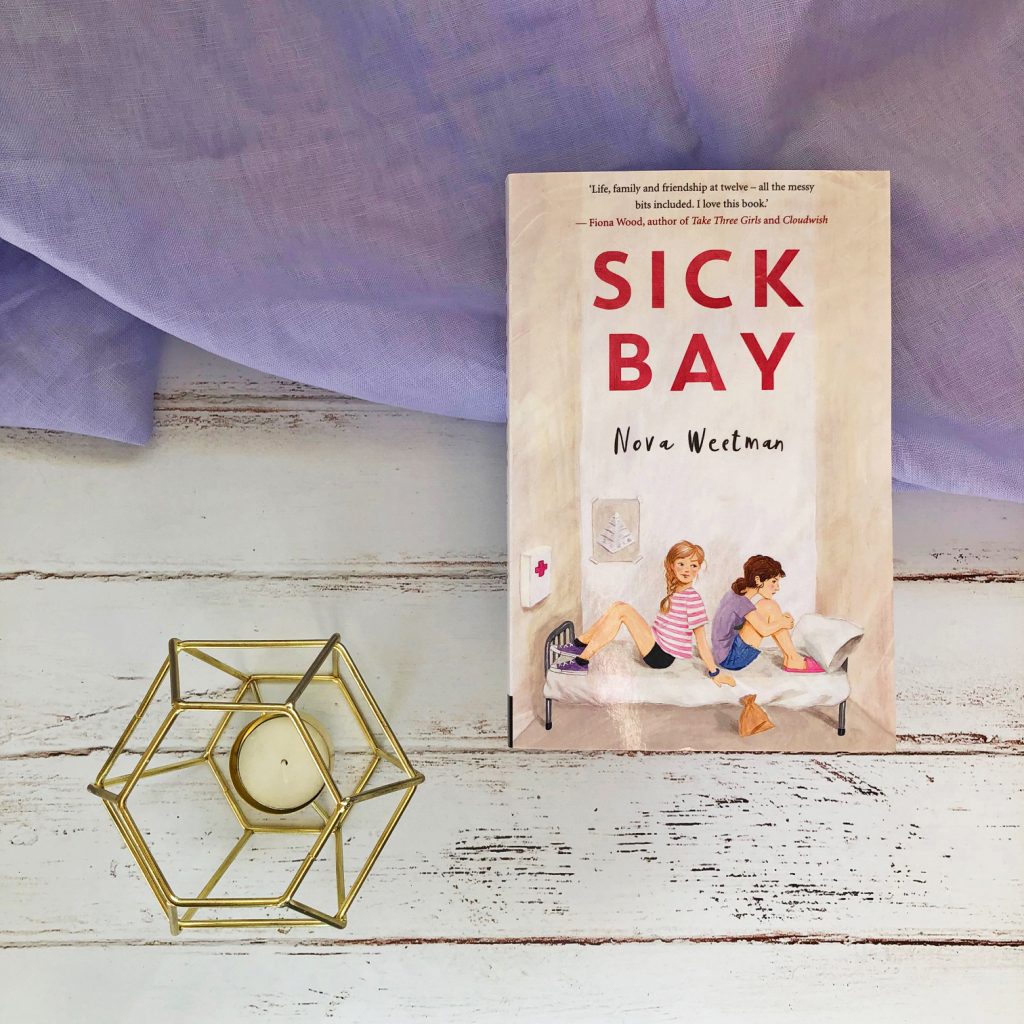 Meg uses Sick Bay to hide from other kids. She’s struggling with changes at home, wears slippers to school and buries her head in books.

New girl Riley is a type 1 diabetic with an over-protective mother. She’d rather chat with her friends than go to Sick Bay, but sometimes she has no choice.

They think they’ve worked each other out, but what if they’ve got it all wrong?

On the brink of high school, Meg and Riley need a place where they can find the courage to be themselves.

Sick Bay by Nova Weetman is a middle grade novel about friendship, identity and learning how to accept who you are when you’re on the cusp of your teenage years.

Meg and Riley are in grade six and about to finish primary school; they’re both struggling with something that others can’t possibly understand. Meg’s father had died and her mother is in a deep state of depression. Meg’s school shoes don’t fit anymore, so she wears slippers to school because she doesn’t have any money to buy proper shoes. She spends all her time in sick bay because she doesn’t really have any friends and she feels safe in sick bay. She gets attention, care and food.

Riley is a diabetic, and her mum doesn’t let her have any freedom. Her mum won’t teach her how to function with diabetics independently, so she’s forced to rely on her. And she’s starting to grow resentful because she’s adopted by the popular group at school and the girls don’t seem to understand — or care — about Riley’s needs. Riley feels like diabetes is holding her back. She needs to regularly test her glucose levels and log everything that she eats, and she feels embarrassed to do this around her new friends.

“It’s Tuesday afternoon so I leave The Bag at home and carry my dirty clothes, and some of Mum’s, to the laundromat a few blocks away. We do own a washing machine and clothes dryer, although they aren’t exactly operational right now. Dad used to keep everything working in the house, so now he is gone, if things break down they stay broken down. A bit like Mum really.”
MEG

Sick Bay is a dual narrative, switching back and forth between Riley and Meg’s POV. Despite their circumstances being very different, they’re both going through something very similar. They’re both lost, a little unsure of who they are or where they want to go. This is their journey towards understanding themselves and their differences, and embracing them.

At first, Riley and Meg don’t click. They’re very different, and they judge the other on first appearances. But over time, friendship develops. Meg is accepting of Riley, and Riley is understanding of Meg’s situation. And the two girls have to decide what they really want out of their final few weeks in primary school, and who their real friends are.

“Lina beams at me. I smile back but start running scenarios through my head. Maybe I can suddenly get sick the night before the party. Excuse myself that way. It worked last time I was supposed to go into the city with them for an afternoon of shopping.”
RILEY

Sick Bay is emotional and heartfelt — there’s so much depth to this novel, and so many layers to these characters that readers will love. Perfect for readers aged 10-13, Sick Bay is the kind of book that young girls could take guidance from. It’s uplifting and reassuring — validating. It’s the kind of book I would’ve liked to read when I was a young teenager.

This is the perfect book for a young reader who may be struggling with school or friends, or maybe even their family. Sick Bay will remind them that they’re not the only one going through a tough time.