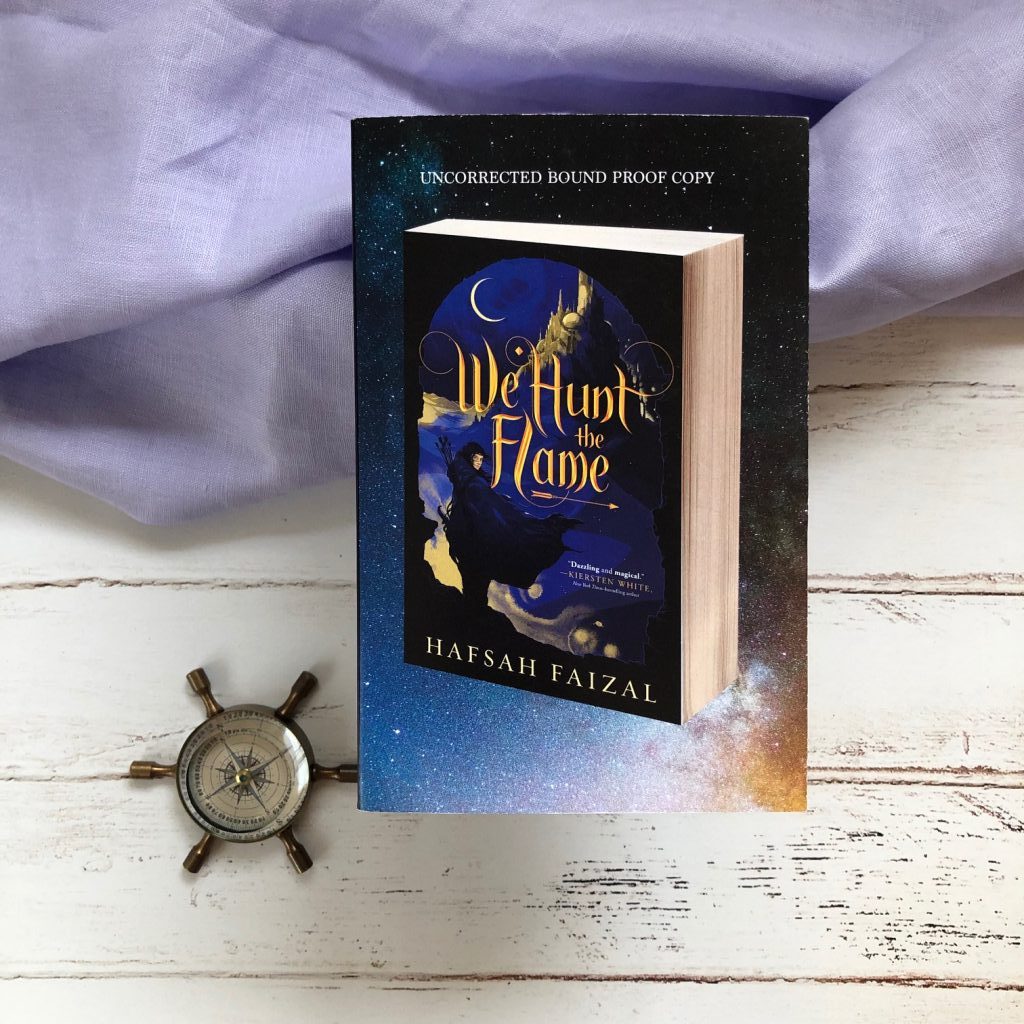 Zafira is the Hunter, disguising herself as a man to brave the cursed forest of the Arz to feed her people.

Nasir is the Prince of Death, assassinating those foolish enough to defy his autocratic father, the king.

If Zafira was exposed as a girl, her achievements would be rejected; if Nasir displayed compassion, his father would brutally punish him. War is brewing in Arawiya, and when Zafira embarks on a quest to uncover an artifact that can restore magic and stop the Arz, Nasir is sent by the king on a similar mission: retrieve the artifact and kill the Hunter. But an ancient evil stirs-and the prize they seek poses a threat greater than either can imagine.

We Hunt the Flame by Hafsah Faizal is the first book in a new fantasy series set in the fictional, once-magical country called Arawiya — inspired by the Middle East and ancient Arabia. The book is about conquering fear and taking identity into your own hands.

Zafira is a hunter who disguises herself as a man every time she enters the Arz — a dark, dangerous and cursed forest where people have gone missing or deranged. Everyone else avoids the forest, but Zafira hunts inside it to provide for her family, friends and village, and to support herself.

Nasir is a Prince and an assassin, and he’s very good. He’s the son of the cruel and horrid Sultan and Nasir does his father’s bidding without ever questioning his actions or his father’s motives. In a way, he seems to have been brainwashed by his father.

“Nasir took the weapons on his person, along with a rucksack containing a few provisions and a change of clothes. He expected this journey to be quick, no longer than a few weeks. Head straight through the Arz, sail to Sharr, follow the Hunter, and bring back the lost Jawarat.”

I had such high hopes for this book, and I’ve been looking forward to it for months. And whilst the premise is intriguing enough and the characters readable, the pacing is a huge letdown. Zafira and Nasir are given a task right at the beginning of a book — they must hunt down a lost artefact that will restore magic to the land, rid the world of evil, and destroy the cursed Arz forest — but then not much happens for the first half of the book. There’s so much dialogue and so much banter, but not a lot of action or plot.

The prose is a bit up and down — sometimes it’s wonderful, lyrical, beautiful. Other times it’s jilted and awkward, and a little too forced. I think perhaps the story was overwritten and needed a good stripping back in the editing stage.

Additionally, the book is told with dual perspectives and most chapters are really short. There’ll be a tense moment in Zafira’s perspective, and then when we get to a heightened moment, the chapter ends and the POV switches to Nasir. It’s a bit jolting and uncomfortable for the reader, and I think the structure could’ve been improved for a better reading experience.

“Her pulse quickened. Against reason, she wanted to go on the quest. To claim this victory for herself. At the very least, she wanted answers. Could a book really bring back magic? Was the caliph involved? He wasn’t bad. If, somehow, he found out she was a woman, she would find her way around. He wouldn’t chop off her head.”

Grief is a strong theme in the book. Zafira’s father went crazy in the Arz and it led to his death, and she’s still very much traumatised by his passing. And Nasir’s mother recently died, and he’s been left alone to deal with his cruel and evil father. It’s a strong theme that runs throughout the book, and I’m sure many readers will be able to relate to Zafira and Nasir’s grief over the death of their beloved parents.

“For once, she appreciated the fearsome, incalculable strangeness of the Arz that made the men disappear. The two Sarasins could be leagues away, and neither she nor they would ever know it. Such was the Arz. This was why so many people who entered never returned — they couldn’t find their way back.”

We Hunt the Flame
Hafsah Faizal
May 2019
Pan Macmillan Publishers