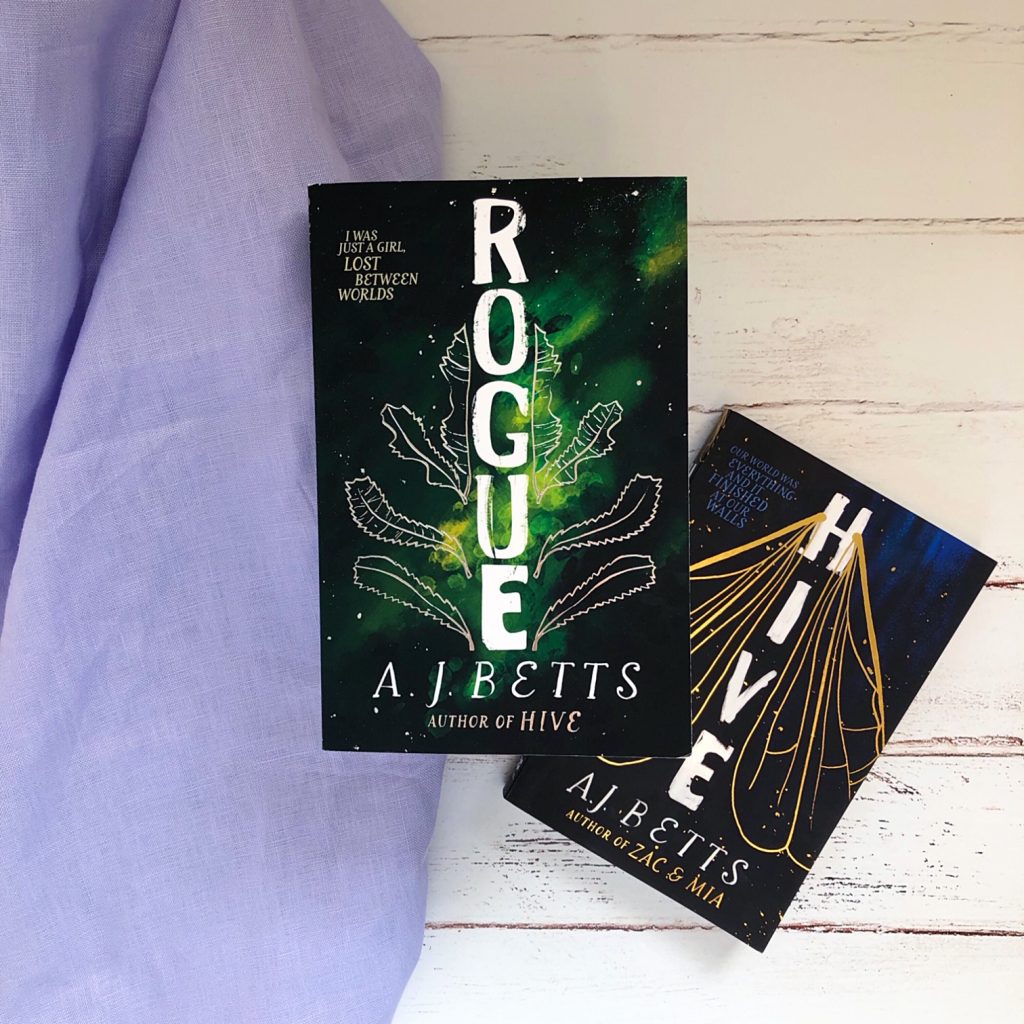 There was no going back; there was no choice, anymore. I’d chosen out and this was it: hot-cold, dry-wet, bright-dark and lonely.

She’s left everything she’s ever known – her friends, her bees, her whole world – because her curiosity was too big to fit within the walls of her underwater home.

But what is this new world she’s come to? Has Hayley finally found somewhere she can belong? Or will she have to keep running?

Rogue is the second and final book in the Vault series by Australian author A.J. Betts. Vault is a dystopian YA series about a young girl — Hayley — who lives in an enclosed vault with a large community and her curiosity leads her to the discovery that they’re in fact living underwater.

Rogue picks up exactly where Hive left off — Hayley travels up in the pod and arrives on land. She has no idea where she is, or even what this place is. Over the course of the novel, you find out why Hayley’s community was living underwater and what happened to those people who were left on land and where they are now.

“Time behaved differently in this world. I didn’t know what I was supposed to do with it. There were no coloured grow lights to signal when to eat, work, rest or sleep. There were no morning meetings to allocate jobs. No bath-time rituals. No prayers, and though I still felt the impulse, I wasn’t sure what to pray for here.”

There were so many possibilities for where this book could go, but I just feel like nothing much happened. This is a really short book and I stand by my original thought that Hive and Rogue should just be one book, but with two parts.

Hayley travels a lot in the book, and it’s kind of boring. Sure, she meets people and they build a family together and there are hurdles she has to overcome and danger she must avoid, and information about the land and the people that she has to learn really quickly. But ultimately, I finished this book quite disappointed at the lack of plot. The final 50 pages has a lot going on but by then, it felt too late. I think this book is let down by its structure and its plot, which is a shame because A.J Betts is a really talented writer and I freaking loved Hive.

“I tried to recall what Will had said about the first generation, and why they went down. They had a problem, you understand? Was it a famine that had caused our ancestors to flee the terrestrial world?”

Rogue explores many themes, including climate change and asylum seeking. The book is mainly set in Tasmania, which is now called Terrafirma. Terrafirma is essentially a prison for drifters — this setting feels really relevant in 2019 and there is a terrifyingly strong connection between Terrafirma in Rogue, and Manus and Nauru in Australia.

Hayley’s characterisation is a strength in the book — she’s thrust into a new world that she has no knowledge of and she’s forced to adapt to her surroundings. She’s resilient and she trusts her instincts, and she is incredibly courageous.

“I’d once resented Will for his freedom. I’d envied his privilege, as the son, to wander unquestioned through the houses, and I often imagined the things I would do, if I were him. I would go to the kitchen for no reason but to smell the nutmeg and touch the polished copper pots.”

The Vault series is recommended for young adult readers, aged 12+