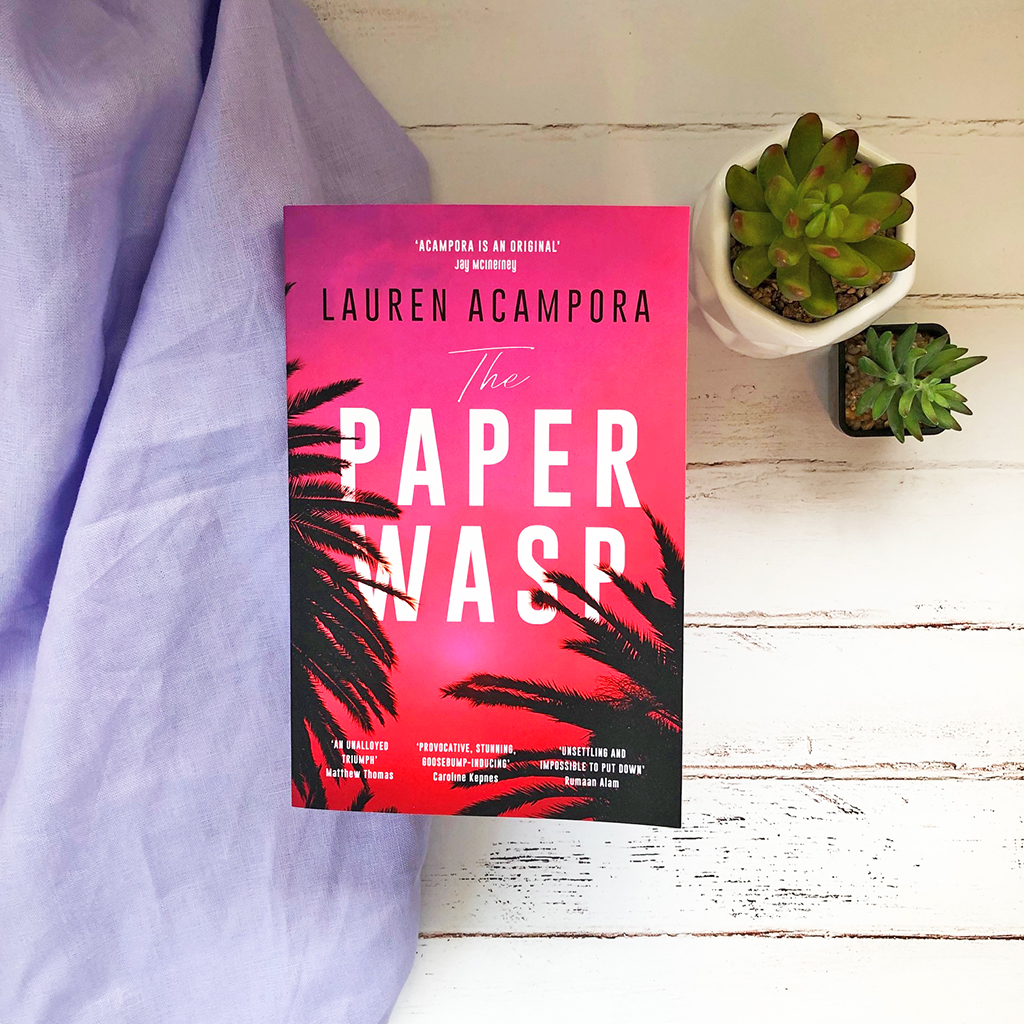 Abby Graven is a dreamer. She dreams her way through her small, lonely life – hiding back at her parents, working at the grocery store. At night, she collects tabloid clippings that taunt her with Elise – her best friend, now Hollywood’s hot new starlet.

When a school reunion throws Elise in her path, Abby seizes her chance. With feverish certainty, she boards a one-way flight to LA to become Elise’s assistant and enters her gauzy realm of film sets and glamorous actors.

But behind Elise’s glossy magazine veneer, she is drowning in Hollywood’s vicious social cycle. Ever the devoted friend, Abby conceals her own burning desire for greatness.

For she is smarter than Elise. More talented. A true artist. And as she edges closer to her own ambitions, Abby can see only one way to make her dream come true.

The Paper Wasp by Lauren Acampora is an addictive, seductive psychological thriller about obsession, greed and betrayal. This novel will draw you in from the very first page, keep you hostage until the very end, and then leave you reeling for a long time afterwards.

This book is utterly bizarre, from the storyline to the setting to the characters. But it all works. It’s an addictive read, and one that I highly recommend to others.

Abby Graven was once valedictorian of her high school class and on a path to a successful adult life. But, now, she’s a 28-year-old college dropout who is living at her parents’ home in Michigan and is obsessed with the life that her high school best friend — Elise Van Dijk — now leads.

Elise is on the cusp of fame. She’s living in Hollywood, she’s featured in glossy fashion magazines, and she’s starring in upcoming lead movies. She appears to be leading a glamorous life, and Abby is enraptured by Elise’s ascent to stardom.

Abby and Elise briefly reconnect at their 10-year high school reunion. When Elise makes a throwaway comment that Abby should call her if she’s ever in LA, I’m sure that Elise didn’t actually expect Abby to do just that. But, a couple of months later, Abby buys a ticket to LA and calls her upon arrival at the airport. Elise, stumped, politely offers up her home for Abby while she’s in town.

Already, the reader is feeling the unease. We can see just how obsessive and dangerous Abby is, showing up to LA with no accommodation in mind, and with the singular hope that Elise will let her crash at her fancy mansion.

“A moment later, the cab was gone and I was alone outside the gate, shielding my eyes in the white light. Through the glare I saw there was a call box, a button I needed to push. I looked at it for a long moment and felt myself come slowly awake. My frenzy had been so absorbing, it was almost as if my body had been hijacked.”

Soon, Abby and Elise reconnect and Abby takes on the role of Elise’s personal assistant. But Abby is scheming, desperate to be as close to Elise as she possibly can. Abby is deluded enough to believe that her own fantasies could become real — that they are real. On the surface, she’s helping Elise, but really, she’s collating information in her mind to propel her own career in Hollywood.

There are so many logistical elements that make this novel work. The pacing is flawless — consistent, unwavering. The tension is heightened with each chapter we read, and the stakes are enormous for the main characters.

Elise and Abby are both fantastic characters. They’re intriguing and engaging, and you’re not sure who to root for. Abby, the unreliable narrator who you can’t help but sympathise with and love. Or Elise, the misunderstood, naive woman who has been caught up in the bright lights of Hollywood.

Acampora’s skill lies in her ability to capture the relationship between Elise and Abby in a way that doesn’t come across as just petty jealousy, but something far more extreme and inviting.

“How silly to have never come to California. Already Michigan was a figment, a prolonged, dank dream from which I’d finally woken. I’d left my winter coat behind, and I found myself thinking of it now, trying to recall the weight and feel of the boiled wool, the hide that I’d sloughed and abandoned.”

The Paper Wasp is about female friendship, ambition, and the consequences of obsession — the unwillingness to let go of your childhood, when everything seemed a lot easier and success seemed simpler to achieve.

I highly recommend this read. It’s fiction at its finest, and fans of crime, thrillers and psychological novels will tear through this book.