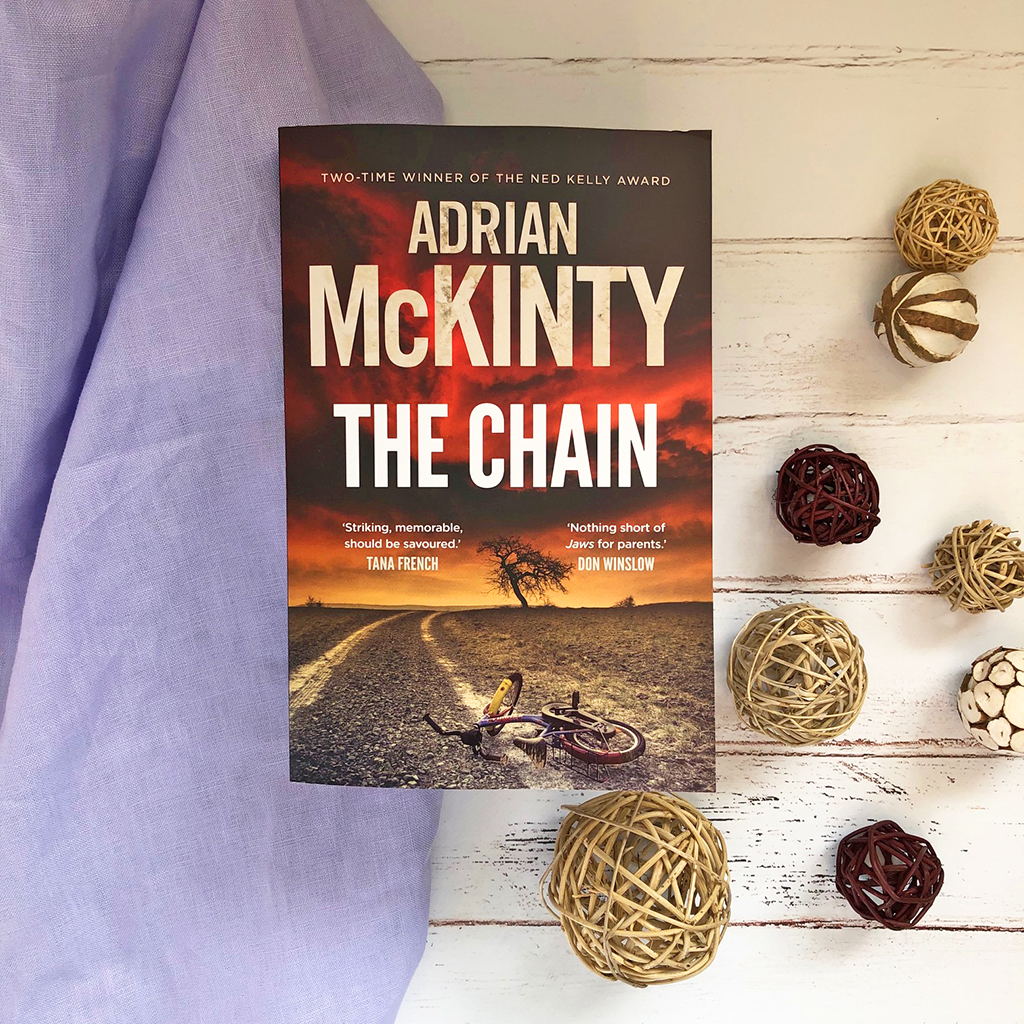 VICTIM. KIDNAPPER. CRIMINAL. You will become each one. You are now part of the chain. Don’t break the chain.

The morning starts like any other. Rachel Klein drops her daughter, Kylie, at the bus stop and heads into her day. But then a phone call changes everything. A woman has Kylie bound and gagged in her back seat, and the only way Rachel will ever see her again is if she pays a ransom – and kidnaps another child. The caller is a mother herself, whose son has also been abducted, and if Rachel doesn’t do exactly as she’s told, both children will die. Rachel is now part of a terrifying scheme – The Chain.

The rules are simple: find the money, find your victim, and then commit a horrible act you’d have thought yourself incapable of just 24 hours ago. Rachel is an ordinary woman, but over the coming days she will be pushed beyond ordinary limits to save her daughter. What the anonymous masterminds behind The Chain know is that parents will do anything for their children. But what they don’t know is that they may have met their match.

Can Rachel be the one person to finally break The Chain?

The Chain by Adrian McKinty is a thrilling crime novel about a large-scale kidnapping scheme involving children.

The premise is pretty simple to grasp. Kidnap another child to save your own child. But don’t tell anyone. You tell anyone, you try to call the police, and you’ll be found out and your child will be murdered.

The premise of the novel is, of course, absurd. Someone has to kidnap a child in order to save their own child, and this ‘chain’ has been going on for years and everyone has kept their mouth shut? Obviously wacky and crazy premise, and I totally loved it — a fun read, an engrossing read, and it’s really easy to finish this novel in the one day.

“She thinks about her mom. Her mom will be worried sick. She’ll go to pieces. She isn’t as strong as she pretends to be. It hasn’t even been a year since she finished her chemo. And her dad — her dad’s awesome but maybe not the most dependable guy in the world.”

Adrian McKinty is skilled at crafting characters who we grow to like and sympathise for. Rachel has overcome cancer once before but it looks like her breast cancer has returned. She’s divorced from her husband, she’s not wealthy, and now her only child — Kylie — has been kidnapped. Rachel must transfer a large sum of money as a ransom, but she must also kidnap someone else’s child to keep ‘The Chain’ going. She must now assume the role of kidnapper.

Rachel doesn’t think she’s capable of doing that — can she really commit that kind of crime? But as we learn in the book, parents are capable of almost anything to save their child, and Rachel is not the only one. The Chain has been going on for years.

This novel is not just about Rachel and Kylie. Through flashbacks, we come to understand the people behind The Chain, and how their childhood and their adult lives led them to create a dangerous and risky kidnapping ring. The POV shift is a fascinating method of building tension.

“Kylie waits until she thinks it’s very late, but naturally she has no way of telling the time. No iPhone, no iPad, no Mac. No watch, of course, but who wears a watch these days?”

Two weaknesses in the book are dialogue and inner dialogue. I don’t think Adrian has captured an accurate female voice — younger or older — in Rachel and Kylie. Rachel comes across a little over the top, too flowery and cringe-y, and Kylie comes off as older and beyond her teenage years. Kylie’s voice often doesn’t match the voice of teenager, and many times throughout the novel, she’s just a little too self-aware for someone her age.

Additionally, some of the interactions don’t quite add up. Rachel is divorced from her ex-husband, but they still talk like they’re emotionally close, and despite his relationships with younger women, he seems to still care about her a little too much for an ex-husband. It comes across as loving and doting, which doesn’t quite add up to the rest of his characterisation as an unreliable, flaky Dad who is always dating a newer, younger girlfriend.

“The Hampton Mall is the perfect place to buy burner phones. She slides the car into a spot in the parking lot, opens up the trunk, and rummages around looking for Kylie’s Red Sox cap…she finds the cap, puts it on, and pulls it low over her face.”

The ending of the book is unrealistic, jolty and a little clunky, but by then you’re so hooked by the story that you don’t really care. Fans of psychological thrillers and crime novels will love this book.