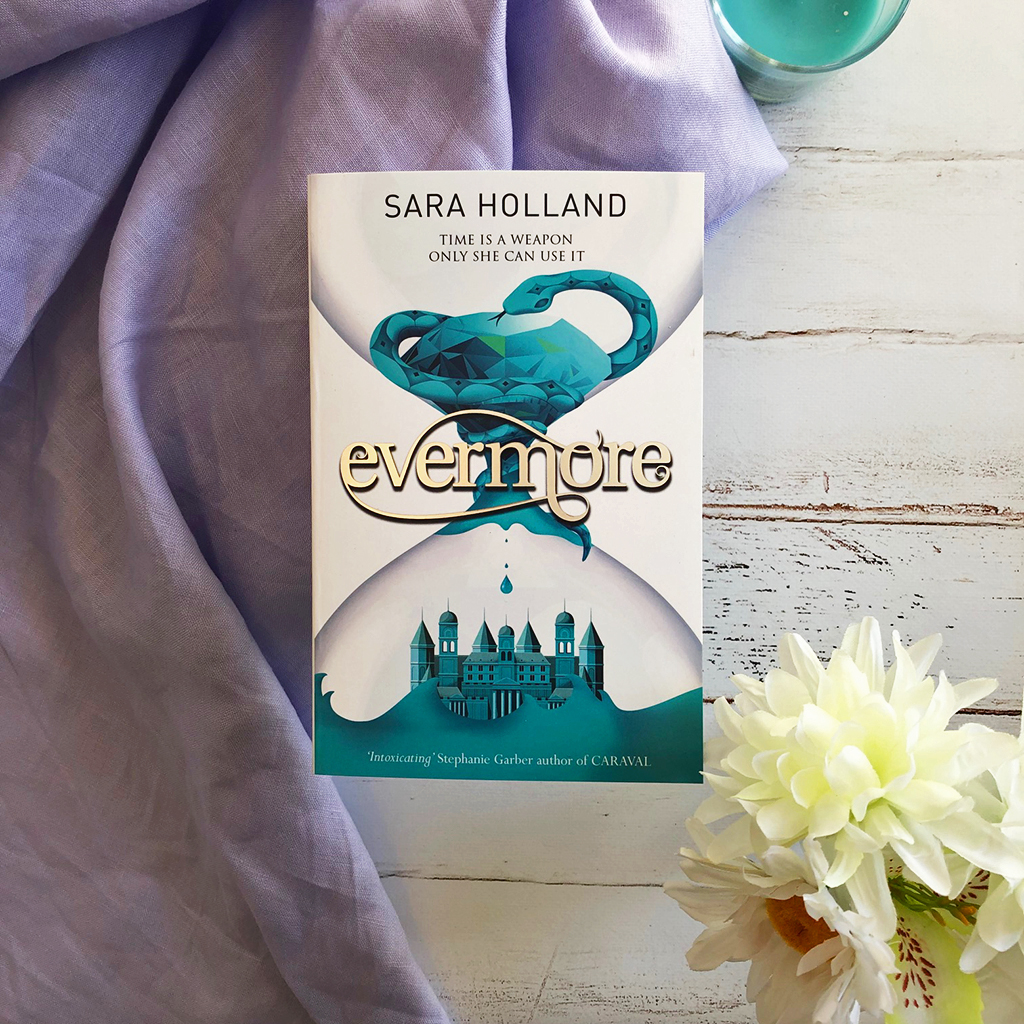 Jules Ember was raised hearing legends of the ancient magic of the wicked Alchemist and the good Sorceress. But she has just learned the truth: not only are the stories true, but she herself is the Alchemist, and Caro—a woman who single-handedly murdered the Queen and Jules’s first love, Roan, in cold blood—is the Sorceress.

The whole kingdom believes that Jules is responsible for the murders, and a hefty bounty has been placed on her head. And Caro is intent on destroying Jules, who stole her heart twelve lifetimes ago. Jules must delve into the stories that she now recognizes are accounts of her own past. For it is only by piecing together the mysteries of her lives that Jules will be able to save the person who has captured her own heart in this one.

Return to the intoxicating land of Sempera, where the rich live for centuries and the poor bleed time to pay for a loaf of bread. Can the Alchemist overcome the Sorceress once and for all?

Evermore is the second and final book in the YA fantasy duology from Sara Holland, picking up where things left off in Everless. If you haven’t read Everless, this review will be filled with spoilers — you are warned!

Last year, I read and loved Everless, and I’ve been eagerly anticipating reading the sequel and reviewing it for the blog. I’ve read quite a lot of negative reviews online, but I liked this sequel. Did I think it was truly amazing? No. Did I enjoy it? Yes. Did I feel it wrapped up the storyline in a satisfying manner? Yes.

Despite there being a lot of travel in this book (like many fantasy sequels), the pacing is quick and the stakes are high, and the tension rises with each passing chapter. There was a lot of history in this book — Jules explores her past and her connection to Caro, to find out what their backstory is and how they’re destined to cross paths in every lifetime. This element may not be for everyone but I found it incredibly necessary to the storyline, and I really enjoyed it.

“Liam Gerling flits across my mind again, the complete belief in his eyes when he stood in an open field and told me I was the Alchemist. I wish he were beside me, if only to show Amma that I’m not mad. Not yet.”

Jules and Caro are pretty far removed for most of the novel, which sometimes drags the novel. The confrontation at the conclusion is satisfying, but I would’ve liked the climax to be a little more drawn out and brought earlier into the story. It felt really rushed. We do spend a lot of time exploring Jules and Caro’s backstories and while this is important, other elements of the story could’ve perhaps been embedded throughout to break up the storyline and ensure the reader’s attention didn’t waver.

The concept of blood being exchanged as currency wasn’t used very frequently in the story, and that saddened me. That concept felt truly original and it was one of my favourite things about Everless — it completely hooked me into picking up the series.

However, its lack of presence in this book just highlights how cut-off Jules is from the rest of civilisation. She’s often in the middle of nowhere, travelling somewhere that will give her answers to her past and her connection with Caro. It was a necessary sacrifice, I’m sure, but something I dearly missed.

“As she speaks, she dances out of the way of all my blows, her movements quick and graceful and efficient. She doesn’t seem to be trying to hurt me, but I realize that we’re closer together now than before. Caro is luring me to her — just like she lured me here, I think bitterly, foolishly.”

Something about this book felt so different to the first one, and not always in a good way. I think Evermore felt more generic, more like stereotypical fantasy than Everless did. And I’m sure that has something to do with the structure of the book. Jules is on a journey for most of the book — she’s travelling a lot and she’s learning a lot of information about her past and its significance, and she’s keeping a low profile. It feels pretty similar to a lot of other fantasy books.

That, combined with the fact that Sara Holland’s incredible magic system from book one doesn’t really get prime position, made for a slightly less-than-impressive sequel.

“My stomach lurched. A year. And these people don’t even care; they’re laughing and smiling as they roll up their sleeves, exposing their arms and palms like fish bellies to the dancing candlelight of the hall. Their flesh is smooth. Unblemished. No signs of having been bled before.”

Two books felt like the appropriate amount for this story — I actually was expecting this to be a trilogy, not thinking too much about it, until I neared the end of Evermore and realised that the story was wrapping up! I really appreciated that. Not all fantasy series need to be 3+ books.

I recommend this series to YA fantasy readers. It sits pretty comfortably in that space, so I feel confident that readers who love and regularly read fantasy will be the core audience for this series.