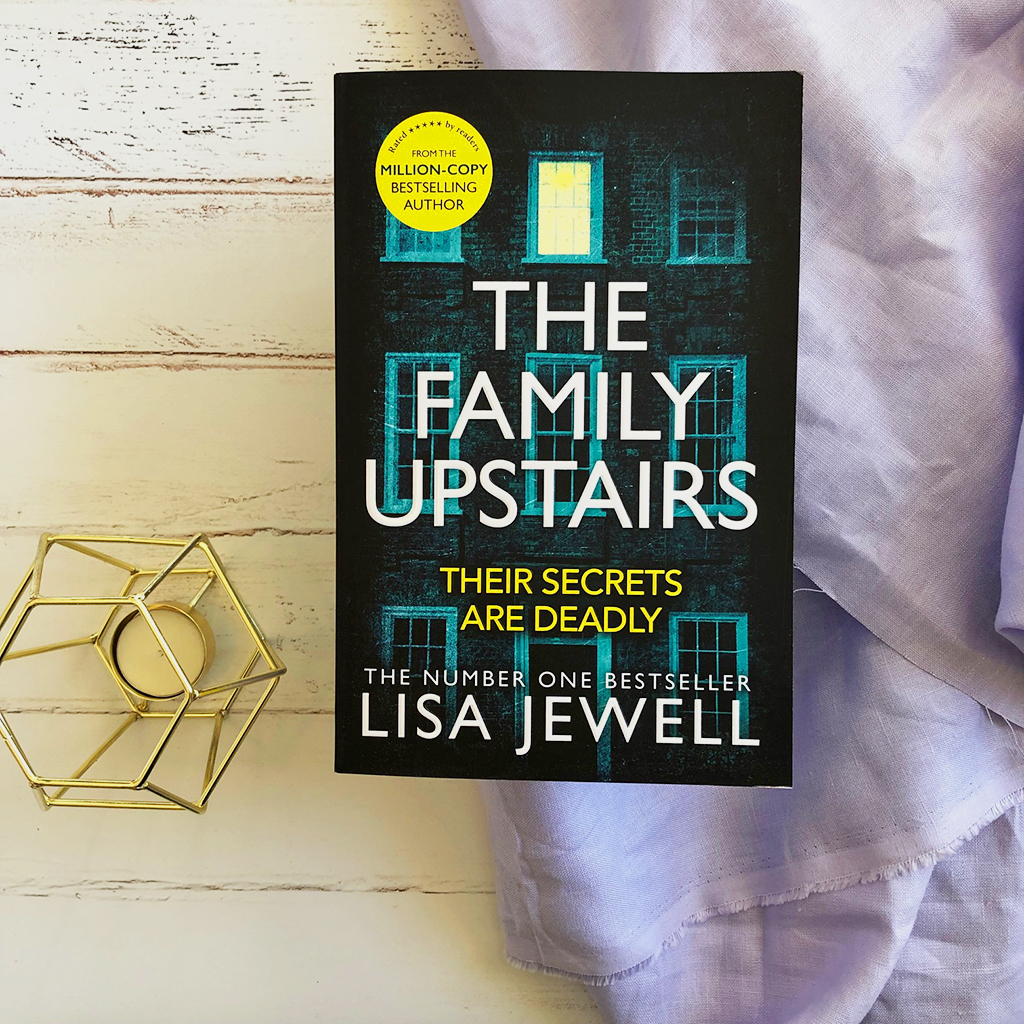 In a large house in London’s fashionable Chelsea, a baby is awake in her cot. Well-fed and cared for, she is happily waiting for someone to pick her up.

In the kitchen lie three decomposing corpses. Close to them is a hastily scrawled note.

They’ve been dead for several days. Who has been looking after the baby? And where did they go?

Two entangled families.
A house with the darkest of secrets.

The Family Upstairs is a compulsive new thriller from British author Lisa Jewell, centring around a vulnerable family, the people they allow into their house, and how that has a disastrous ripple effect on generations to follow.

25 years earlier, the police arrive at 16 Cheyne Walk in Chelsea, London after concerns for the welfare of the inhabitants. They find three bodies inside in the kitchen, as well as a healthy 10 month old baby who has been well cared for. An investigation ensues, but the police are never able to uncover what happened inside that home.

The book switches POV between a few different characters. First, we have Henry Lamb 25 years earlier. He lives with his parents and his sister at the fashionable house in Chelsea. They’re rich and they’re happy. But over time, they spend too much money, their worth diminishes, and Henry’s mother seeks solace in something bigger than just family. She invites outsiders into their home, at first just for a short time. But then it becomes clear that these new tenants have no intention of leaving and over time, their influence over the family grows dangerous.

The reader follows Henry’s journey from child to adolescent to teenager to adult. At first, he’s spoilt and naive, and too trusting. Over time, he can see the effect that these visitors are having on his parents and the house that they’ve cherished over the years. Henry takes drastic measures to try and regain control.

We also meet Libby and Lucy, although it’s clear that their storylines are in the present — decades later.

Libby has recently turned 25. She rents an apartment but she’s struggling financially — she’s an adopted child. When she finds out she’s inherited a 3-storey mansion overlooking the Thames, she goes searching for the truth about her parents. We find out pretty quickly that Libby was the baby found in the mansion all those years earlier. Her parents were two of the three dead adults found in the kitchen. And Henry? Well, Henry must be her brother.

Lucy Lamb is Henry’s other sister, who he grew up with in the Chelsea mansion. Where is she now? She’s living in France but is homeless, and she has two young children. Slowly, she starts making her way back to London to find the baby that was left behind 24 years earlier.

“Her head, which a week ago had been filled with new sandals, a hen night, her split ends, the houseplants that needed watering, was now filled with people sleeping on mattresses and dead rabbits and a big, scary house, empty but for a large rocking crib from Harrods with strangely sinister pale blue roses painted on the sides.”

The Family Upstairs is a psychological thriller that had me hooked from start to finish. At first, it seemed a little confusing with the different POV — I got Lucy and Libby mixed up a couple of times — but I soon settled into the storyline. The mysterious deaths in the London mansion and the unclaimed baby left behind prove a fascinating premise.

The writing is tight and polished, building tension and inviting intrigue that keeps the reader entertained throughout the entire book. Each chapter gives you just enough information to make you think you know where the story is going, but still keeps enough mystery that you’re desperate to keep reading.

The storyline and the plot is incredibly complex, and so the pace moves really quickly because there’s a lot of history for the reader to take in. Henry, Libby and Lucy have all lived incredibly different lives and to give them due attention, we need to spend a lot of time understanding their circumstances, their motives, their next move

“Lucy hasn’t had a drink for weeks. She would die for a beer. But she can’t. She has to keep all her wits about her for the next half an hour or so. She shakes her head.”

Chilling and dark, and highly recommended. Anyone who loves a good mystery thriller will devour this book.