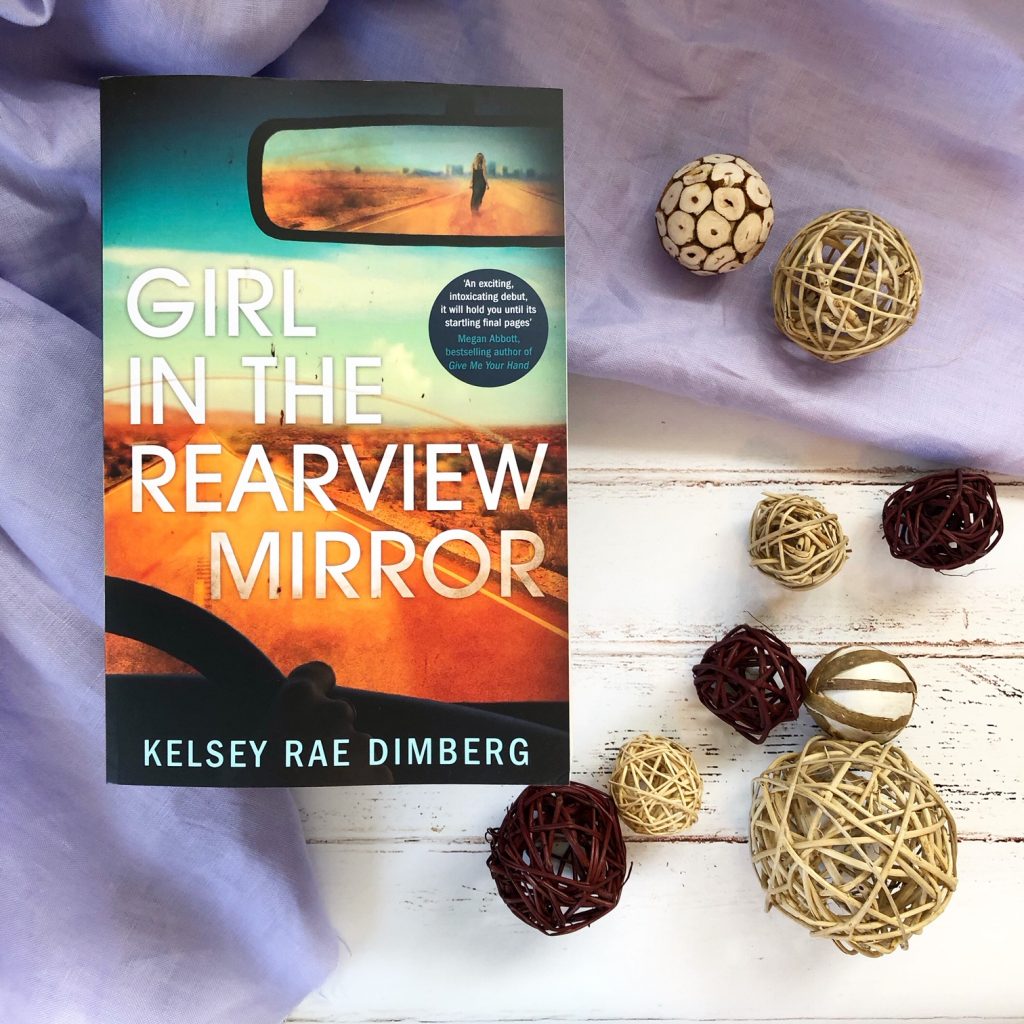 Desperate to put her past in the rearview mirror, Finn Hunt leaves the Midwest for Phoenix, Arizona, where no one knows her story.

While she’s working a dead-end job, a chance meeting with Philip Martin, son of a prominent US Senator, leads Finn to a position as nanny for Amabel, his precocious four-year-old daughter. Quickly seduced into the Martins’ privileged world, Finn can almost believe she belongs there, almost forget the dark past that haunts her.

Then, in the stifling heat of a desert summer as the Senator’s re-election looms, a strange woman begins to follow Finn, claiming a connection to Philip and threatening to expose the family to scandal. As Finn tries to protect Amabel, and shield the Martins, she’s inadvertently drawn deeper and deeper into their buried secrets.

The family trusts Finn, for now, but it will only take one mistake for everything she holds dear – the Martins’ world, her new life – to fall apart . . .

Girl in the Rearview Mirror by Kelsey Rae Dimberg is a mystery thriller novel about privilege, power, family and expectation. Set in Arizona, twenty-something Finn works as a babysitter for a very high profile family and she quickly finds herself entangled in a dangerous web of lies.

When a woman shows up claiming to hold a secret that could destroy the Martins’ lives, Finn tries desperately to fix the situation before it implodes. But has she bitten off more than she can chew? Will she just make the situation worse?

“Marina would never miss her own party. She wouldn’t retreat from Philip Martin and let Iris have him. Yet that’s exactly what she was doing…I could tell her I knew about Iris. Offer to help. But knowing of my involvement would make her quiver. If she found out I’d know for days, she’d fire me on the spot.”

Initially, the pacing is incredibly slow. The first third of the book doesn’t move fast enough to grab the reader’s attention, and you have to hope the reader continues to invest in the storyline. Girl in the Rearview Mirror is a fantastic read, but the beginning had me bored.

Finn’s mysterious and secretive past isn’t really mentioned until the second half of the book and I couldn’t really see how her past and present were going to link. And the first third of the book is all about Finn’s babysitting, and the world of US politics — two things that I found pretty boring.

“I put together their childhood in pieces: the album, the anecdotes Philip let slip, Bryant’s longer knowledge of the tension between Philip and his father, and something else — a feeling I had of knowing Philip.”

Finn’s paranoia grows over the course of the novel — she’s an unreliable narrator. She second guesses everything and questions every moment. She embarks on some rather absurd (and unbelievable) investigatory trips. At times, she’s incredibly naive and really rather stupid. It’s super obvious that *spoiler alert* her boyfriend is drugging her at night and I’m pretty sure she realises it and yet she just keeps on downing the drinks that he makes for her and then she’s really ‘surprised’ when she wakes up the next morning feeling rubbish. It’s hard to sympathise for her and her situation when she’s so clueless.

Kelsey builds tension really well, revealing little snippets of information and secrets to intrigue you even more and pull you in further. There are plenty of plot points that I didn’t see coming. Sometimes with crime novels, the structure of the plot can be fairly predictable, but I honestly didn’t know where this one was going and so I was more than happy to keep reading.

“The redhead observed us, arms crossed, and I swore she was smirking. She was older than I’d guessed at the fair, early twenties, maybe. Even in the shadow of her hat, her skin was pale, almost opalescent. Against it, her hair was bright as a flag.”

The writing is sleek and sophisticated, the characters all unique and dynamic. Girl in the Rearview Mirror highlights issues of wealth and privilege, and how those two things can mean a lot of collateral damage for a lot of innocent people.

Recommended for fans of mysteries, crime and thrillers. Stick with the book, because the first 100 pages may be a struggle, but the effort is worth it in the end.