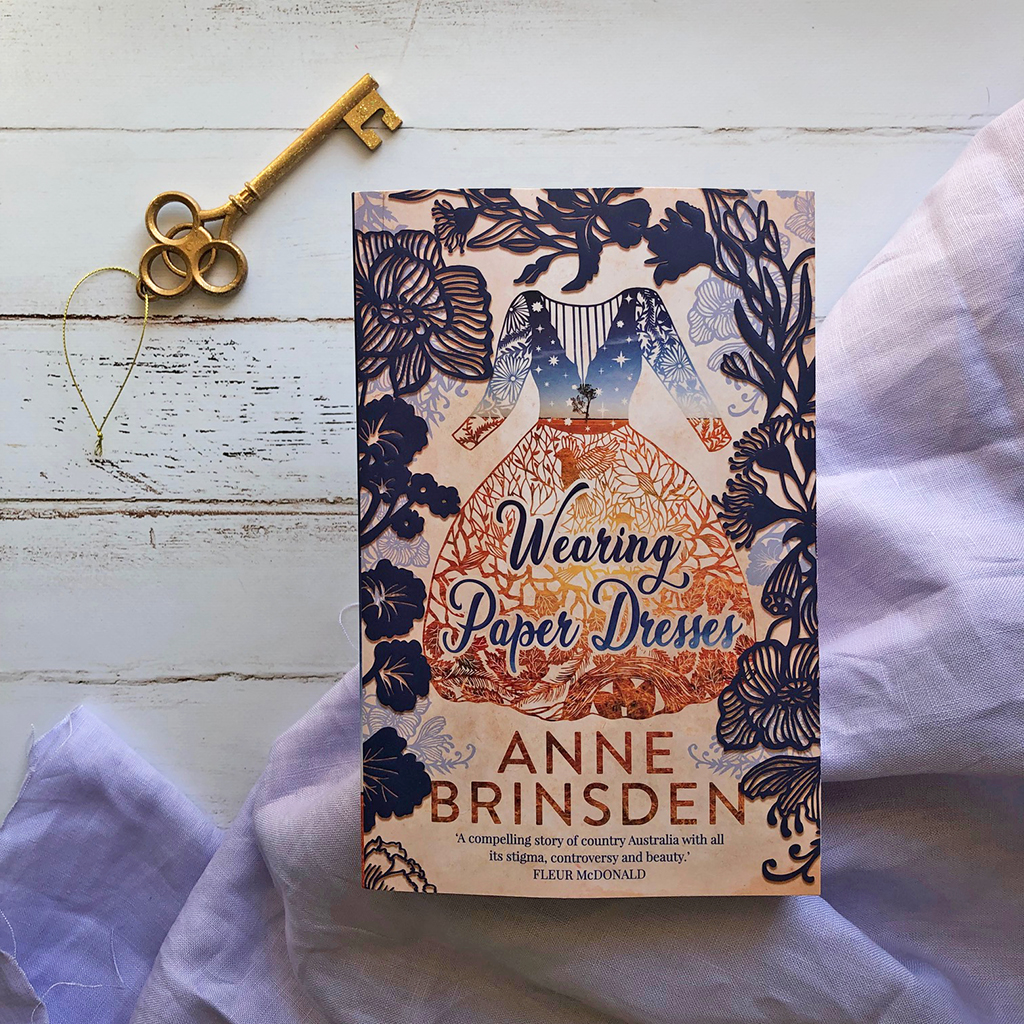 But Elise wasn’t from the Mallee, and she knew nothing of its ways.

Discover the world of a small homestead perched on the sunburnt farmland of northern Victoria. Meet Elise, whose urbane 1950s glamour is rudely transplanted to the pragmatic red soil of the Mallee when her husband returns to work the family farm. But you cannot uproot a plant and expect it to thrive.

And so it is with Elise. Her meringues don’t impress the shearers, the locals scoff at her Paris fashions, her husband works all day in the back paddock, and the drought kills everything but the geraniums she despises.

As their mother withdraws more and more into herself, her spirited, tearaway daughters, Marjorie and Ruby, wild as weeds, are left to raise themselves as best they can. Until tragedy strikes, and Marjorie flees to the city determined to leave her family behind. And there she stays, leading a very different life, until the boy she loves draws her back to the land she can’t forget…

Wearing Paper Dresses is a debut literary novel from Australian author Anne Brinsden, set in rural Mallee in the 1950s, which explores notions of family, land, mental illness and responsibility.

Glamorous, sophisticated, talented Elise leaves the city and moves with her two children and her husband to her father-in-law’s wheat and sheep farm in Mallee. The townsfolk are instantly suspicious of her and her ‘city’ ways. She drinks coffee and not tea and she doesn’t understand what it’s like to live in such a harsh environment.

Most of the novel is from the POV of Elise’s daughter Marjorie, and over the years, we witness Elise’s mental health deteriorate. She starts talking to plastic flowers and wearing tea cosies on her head. Her husband and father-in-law acknowledge her health but pretend to ignore it; they assume it’ll solve itself. Wearing Paper Dresses highlights how poorly mental illness was received in the 1950s.

“The talk might have stopped but the hint of a glittery look didn’t. The tea in the teapot went cold from then on. But naked teapots and cold tea didn’t bother Elise because she drank coffee — and coffee percolators didn’t generally dress themselves in cosies.”

Through Marjorie’s perspective, we experience the hurt, confusion and the embarrassment that she feels growing up. But we also witness the solid bond she forms with her sister Ruby, and there’s definitely a strong sense of camaraderie there as they both work together to get through their mother’s troubling illness and the effect it has on their childhood.

This book certainly wasn’t what I expected it to be, after reading the blurb and looking at the cover. I anticipated this to be a chick-lit, perhaps a rural romance novel. And whilst there’s an element of romance in this book between Marjorie and one of the boys in her class, this book is about the relationship between Marjorie and her family, and about the events that lead to Elise’s many nervous breakdowns.

Wearing Paper Dresses is as much a character-driven novel as it is plot-driven. I was pleasantly surprised by this book, and found myself enchanted by the setting, the characters, and the plot. Whilst the book explores difficult themes such as mental illness and domestic abuse, you can’t help but fall in love with the characters.

“Marjorie stayed home from school after that and helped Elise. They dug and raked and swept. And Elise was alive and burning with energy. Their waking hours were consumed with garden making. They piled red dirt into neat garden beds all over the yard, Marjorie imaging all the while the rose garden to come.”

The setting is one of the strengths of the novel — Anne has perfectly captured the harsh, sunburnt landscape of the Mallee, and it’s easy to imagine just how difficult life would be like for Elise and her family. The setting feels incredibly isolating, but also claustrophobic at the same time, a juxtaposition that evokes great unease for most of the novel.

The writing is lyrical, funny and descriptive, the imagery drawing you in and holding you hostage with enticing vocabulary and prose. The pacing is on point — authentic and realistic to the storyline. Wearing Paper Dresses is an impressive debut.

Recommended for literary fiction readers, and those readers who love a rural setting. Fans of historical fiction will also find much to love about this book.