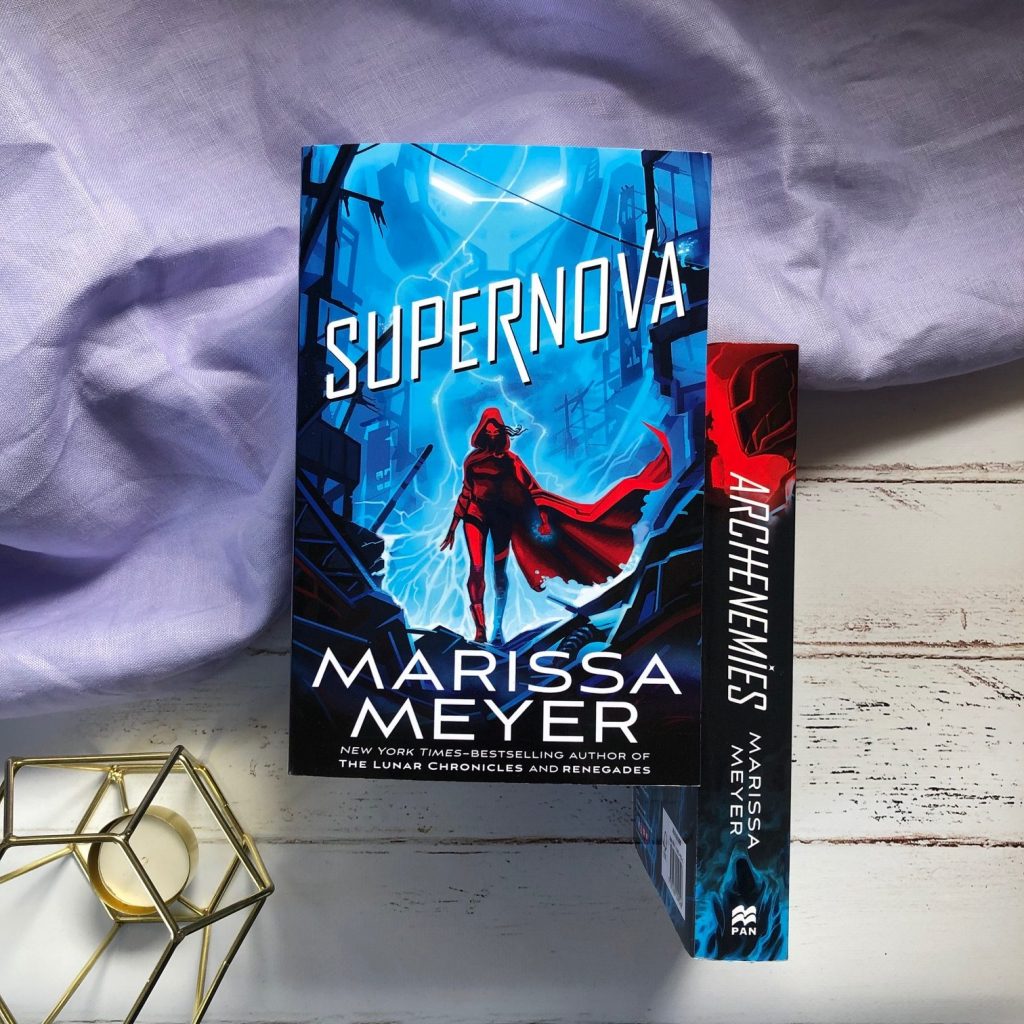 All’s fair in love and anarchy …

Nova and Adrian are struggling to keep their secret identities concealed while the battle rages on between their alter egos and their allies. But their greatest fears are about to come to life. Secrets, lies and betrayals are revealed as anarchy once again threatens to reclaim Gatlon City.

Supernova is the third and final instalment in Marissa Meyer’s Renegades Trilogy, set within the world of superheroes and super-villains.

This review is riddled with spoilers, not just for the series thus far but of Supernova. It’s hard to review this critically without being specific on the examples. Only read on if you’ve read Supernova, or if you’re happy being spoiled.

Sitting at 550 pages, Supernova is a beast of a book. The story picks up almost immediately after Archenemies left off — Nova/Nightmare has stolen Ace Anarchy’s helmet, used Agent N to strip Frostbite, Gargoyle and Aftershock of their powers, and witnessed Max Everhart nearly bleed to death after Frostbite unintentionally stabbed him.

Nova is still in doubt over her true objective, and where her true loyalties lie. She’s falling hard for Adrian Everhart, and she’s developed true friendships with the other Renegades. But she owes Ace Anarchy her life, right? She’s a conflicted character, and she remains conflicted for the majority of the book.

“To a lot of prodigy parents, Max would have been seen as a threat long before he was seen as a child worth loving. For months, after, Max had lived with a civilian foster family who cared for him until Hugh and Simon could figure out what to do. From the start, Hugh had felt it was important for him to be kept close.”

The pacing, dialogue and world-building have always been the strengths of the Renegades Trilogy. Marissa Meyer is really skilled at constructing relatable characters who you can’t help but empathise with or sympathise for. There are moments in Supernova where Nova is a bit unlikeable and her actions are unrealistic — like when she tries to convince Ace Anarchy and the rest of the crew that they should just leave Gatlon City and set up camp somewhere else — but for most of the novel, you’re rooting for her.

Both sides of the war — Renegades and Anarchists — are fighting for what they believe is right. And both sides have beliefs and values that the reader could understand. It’s not black and white, and there are moments of the book that are very grey. It’s easy for the characters to lose sight of what’s important, and how to achieve their end goal.

“Nova was eager to put this charade behind her. As soon as she left headquarters with the fake helmet tucked into a plain tote bag, she marched straight for Blackmire Station, one of the defunct stations on the old Gatlon City subway line.”

Structurally, Supernova falls short. Nova’s secret identity as Nightmare is discovered by Adrian and the gang pretty early on. Understandably, he’s pissed. Nova is immediately imprisoned in Cragmoor Penitentiary, where Ace Anarchy and other dangerous villains are held. This is where the book starts to get really good. You think Nova will work out a way to escape. Maybe she’ll break out Ace as well?

But, the resulting plot line is a disappointment. She claims innocence, Adrian is worried he is wrong, and then one of Nova’s allies dons her suit and delivers a cringe-worthy speech to Adrian that Nova has been framed and….Adrian believes them. And thus, Nova is released from prison and all returns to normal.

It’s a soft plot point — it feels like the author wrote herself into a corner and took the easy way out. It also gives the reader whiplash and severe disappointment, because of all the ways the plot could’ve gone, mistaken identity and the classic ‘I was framed’ storyline was the weakest option.

Another weak element of the book are the action/fighting scenes. I felt myself growing bored whenever they came up, perhaps because they were too long and stretched over multiple chapters. Perhaps because the writing wasn’t as tight and polished as it needs to be during a fight scene.

“Dazed, Nova looked down to see one hive with a footprint shoved into its papery shell in the centre of the room. She’d moved so fast, she hadn’t even noticed stepping on it. The bees who had called it home were swarming around, apparently enraged, but they were not the insects that worried her.”

A solid conclusion to an explosive and action-packed series. Even with a few questionable plot points and unrealistic, far-fetched moments, Supernova will please fans of the series.