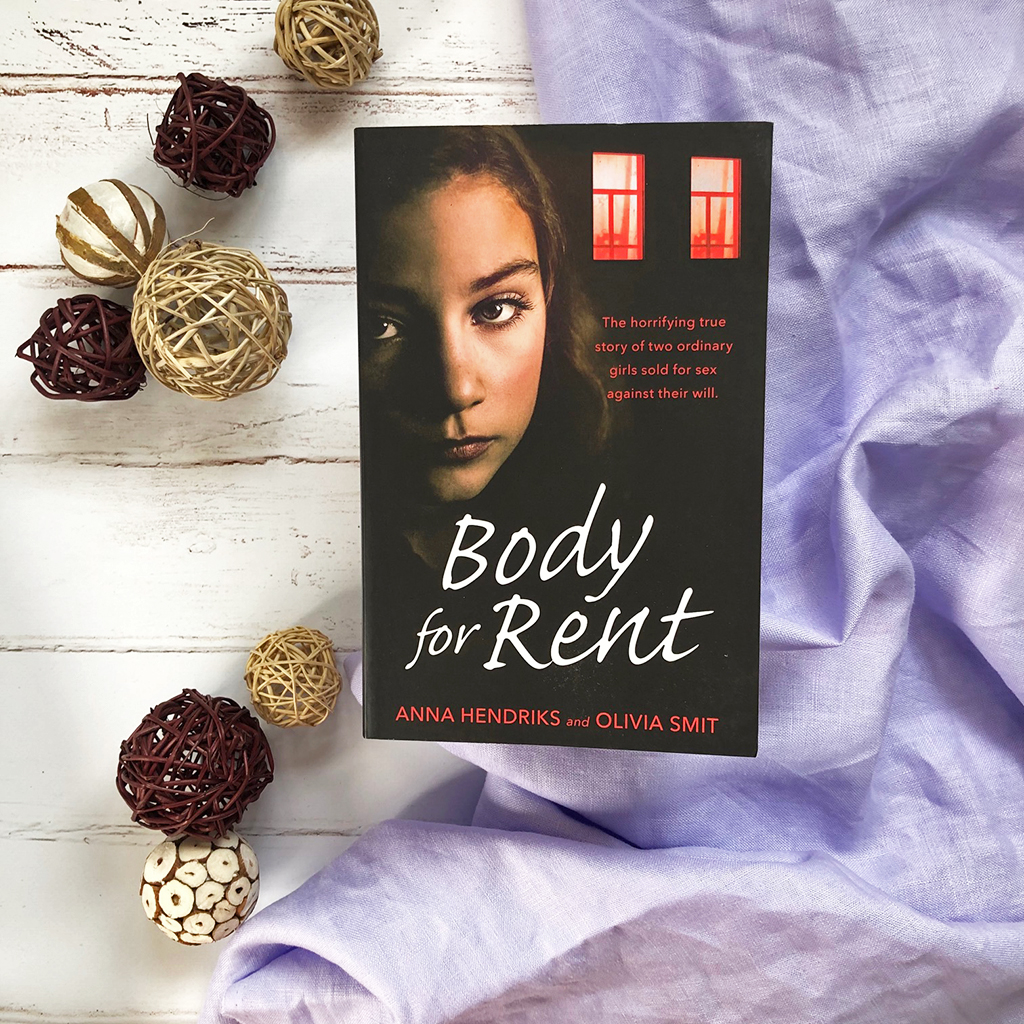 Two ordinary young girls lured into the sex trade. The horrifying true story of life behind the curtains of Amsterdam’s Red Light District.

Growing up in a quiet, middle-class suburb outside of Amsterdam, childhood best friends Anna and Olivia had their whole lives ahead of them. But every parent’s worst nightmare came true when the teenagers fell in with the wrong crowd. Eleven years their senior, Ricardo was charming and good-looking – and Anna and Olivia easy prey. Blind to his grooming, the girls were soon trapped in a terrifying cycle of sexual and physical abuse.

But their nightmare was only just beginning.

Trafficked to the neon-lit windows of Amsterdam’s Red Light District, Anna and Oliva were forced to work as prostitutes, servicing countless men night after night against their will.

Body for Rent reveals the disturbing truth behind Amsterdam’s Red Light District, and the shocking ease with which ordinary girls can be exploited. But despite the unimaginable horrors they endured, the damage done to their bodies and their minds, their friendship remained as strong as ever, giving them hope that one day, they would escape…

Body for Rent by Anna Hendriks and Olivia Smit is a harrowing and shocking memoir from two women who were forced into prostitution in Amsterdam’s Red Light District as teenagers.

Anna and Olivia are childhood best friends who both grew up in unstable homes — Anna’s father left the family when she was young, and when Anna had the option of choosing which parent to live with, her mother said “If you go to live with him, I shall hang myself.” Anna’s relationship with her mother was forever strained, and her father’s attention was thereafter focused on his new girlfriend.

Olivia’s father was violent and abusive towards their mother and Olivia never felt she could form the right bond with her parents after the childhood she endured. When she met Anna, the two bonded over their dysfunctional home lives and found family in each other.

“It was Olivia who came up with the idea to write notes to the school, faking our parents’ signatures and saying that we were too ill to come to class. Although I was more than ready and very willing to play truant, she was the one with the guts to actually say it out loud that we should do it.”

Whilst Olivia and Anna desperately needed each other, their friendship was toxic. They skipped school, stole, and became heavily reliant on drugs and alcohol. And then they met Ricardo, an older man who slowly began grooming them for prostitution.

It would be easy for a reader to learn about this story and fail to understand how the girls became entrapped in this situation, but Anna and Olivia use their voices to educate readers on grooming, manipulation, control, and how easily young girls can find themselves in a similar situation.

At its core, Body for Rent is about friendship and the strength that it can give individuals — Anna and Olivia were able to get through their years of prostitution because they had each other for support. There were incredibly terrifying moments for each of them — abuse, violence, abortion, rape — but the girls always had each other to help pull through.

“Over. It was over. My first customer as a full-time window prostitute. I reached for the whisky, the Red Bull, cigarettes — and my phone. As much as I craved my numbing shot of alcohol and the soothing pull of nicotine into my lungs, my most urgent need was Olivia; I had to hear her voice, and feel the warmth of her love for me as I told her that it was done and I was safe.”

Highly recommended. At times, it’s hard to read. What happened to these girls is horrifying and just very upsetting, but Olivia and Anna wouldn’t be the only girls to have gone through this and I’m sure there are young girls currently going through this situation right now. It’s important to read these kinds of stories to understand how they happen so they can be recognised in the future.