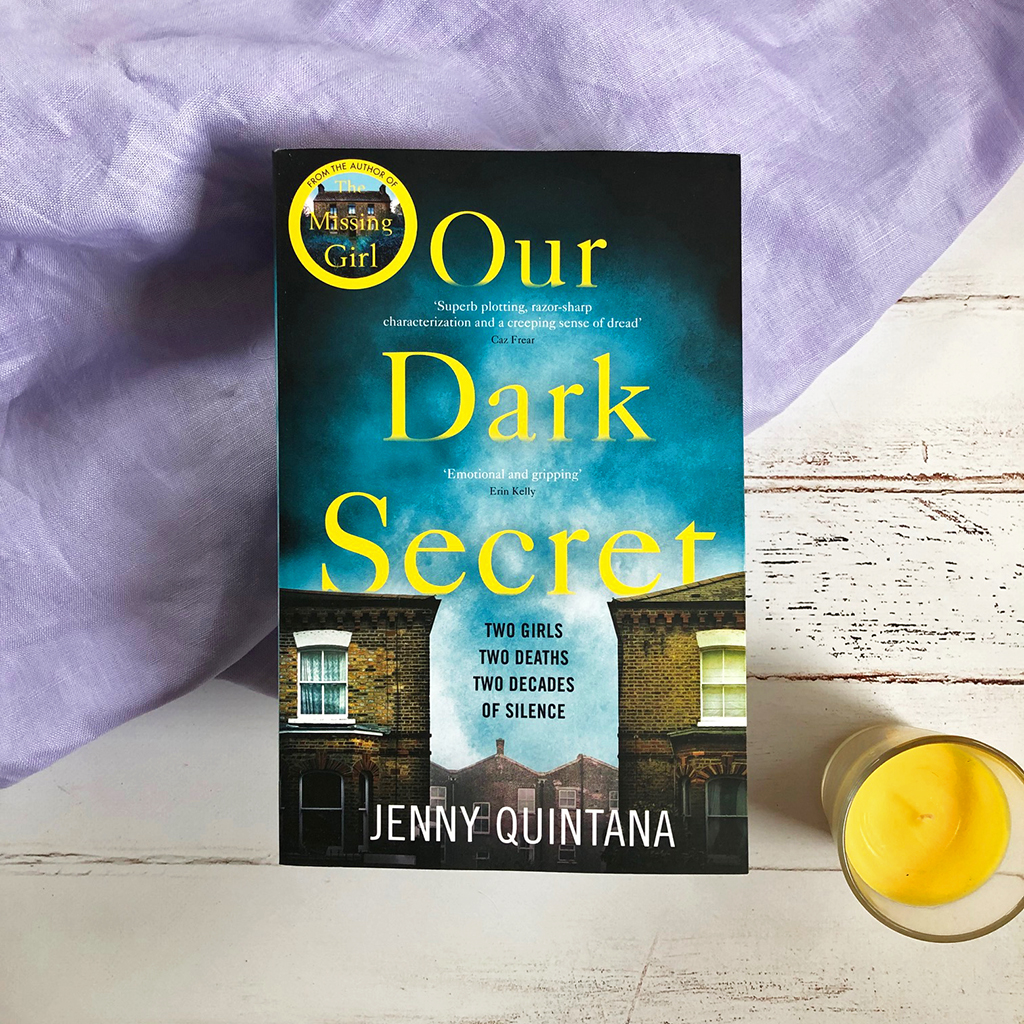 From the author of The Missing Girl, Jenny Quintana’s gripping novel, Our Dark Secret, tells the story of two girls, two deaths and two decades of silence . . .

The crazy girls, they called them – or at least, Elizabeth liked to think they did. As a teenager in the late 1970s, she was clever, overweight and a perfect victim for the bullies. Then Rachel and her family arrived in town and, for Elizabeth, it was as if a light had been switched on. She was drawn to the bright and beautiful Rachel like a moth to a flame.

Rachel had her own reasons for wanting Elizabeth as a friend, and although their relationship was far from equal, Elizabeth would do anything for Rachel.

Then the first body was discovered.

Twenty years on, Elizabeth wants nothing more than to keep the secrets of her teenage years where they belong: in the past. But another body has been found, and she can’t keep running from what happened.

Our Dark Secret is a psychological thriller about buried secrets, hidden pasts, and the bond between two girls who are hiding a dark secret.

The story follows a dual timeline and switches between 1978 and 1999, slowly revealing the story behind Elizabeth and Rachel’s friendship. From Elizabeth’s point of view, we understand that in 1978 she was lonely, overweight and in desperate need of friendship and companionship.

When she meets Rachel, she grows obsessive — watching her, following her, and desperately trying to find common ground with her. The two do become friends, over time, but it’s not out of loyalty. It’s out of shared trauma and eventually, a terrible crime that ties them both together forever.

In 1999, Elizabeth is similar to how we knew her before. She’s still overweight, lonely and anxious. She receives a phone call from an old neighbour. A body has been found in her old town, and the police suspect foul play. Elizabeth is terrified.

“People around me narrow their eyes as though I’ve done something terribly wrong. Usually it’s my size that affronts them. Sometimes it’s my clothes: mid-calf skirts and buttoned-up blouses. (I’ve never known how to dress).”

Elizabeth is an unreliable narrator — she lies a lot, twisting the truth to capture the attention of her father. And Rachel feels like a mythical character. We never really feel that we understand her because we only meet her through Elizabeth’s POV. Rachel seems to keep to herself, both in the physical sense and also in the social sense. She functions alone, and she doesn’t need companionship like Elizabeth does.

Elizabeth’s characterisation has the most depth, but she’s also the most flawed character. Her parents split up, her dad runs off with another woman, but Elizabeth only seems to care about herself and her non-existent friendship with Rachel. She’s not a great person, and not one that you’d want to be friends with, but I did enjoy reading about her in the book.

The mysteries within the book are enough to keep you engaged and interested in the story. A body has been found in Elizabeth’s hometown and slowly, we find out how Elizabeth and Rachel are connected to that character. Do I think this is the best crime/thriller novel I’ve read in this past year? No. I thought it was fine, but it wasn’t amazing. This is the kind of book you’d pick up at an airport and read on a flight.

“I was still angry with Melissa — the way she’d insulted me. She was only nine. Who did she think she was? It was bad enough at school when people my own age called me names, and then there was the stuff about Mum. Dad would be furious if he knew Mrs Wright had called her prissy.”

Personally, I felt that the 1999 storyline was unnecessary and didn’t add any value to the story. The majority of the book takes place in 1978 and if anything, the 1999 storyline (when it did happen) just detracted from the tense, fast-paced action of the other timeline.

Recommended for fans of thriller, crime and mystery novels.