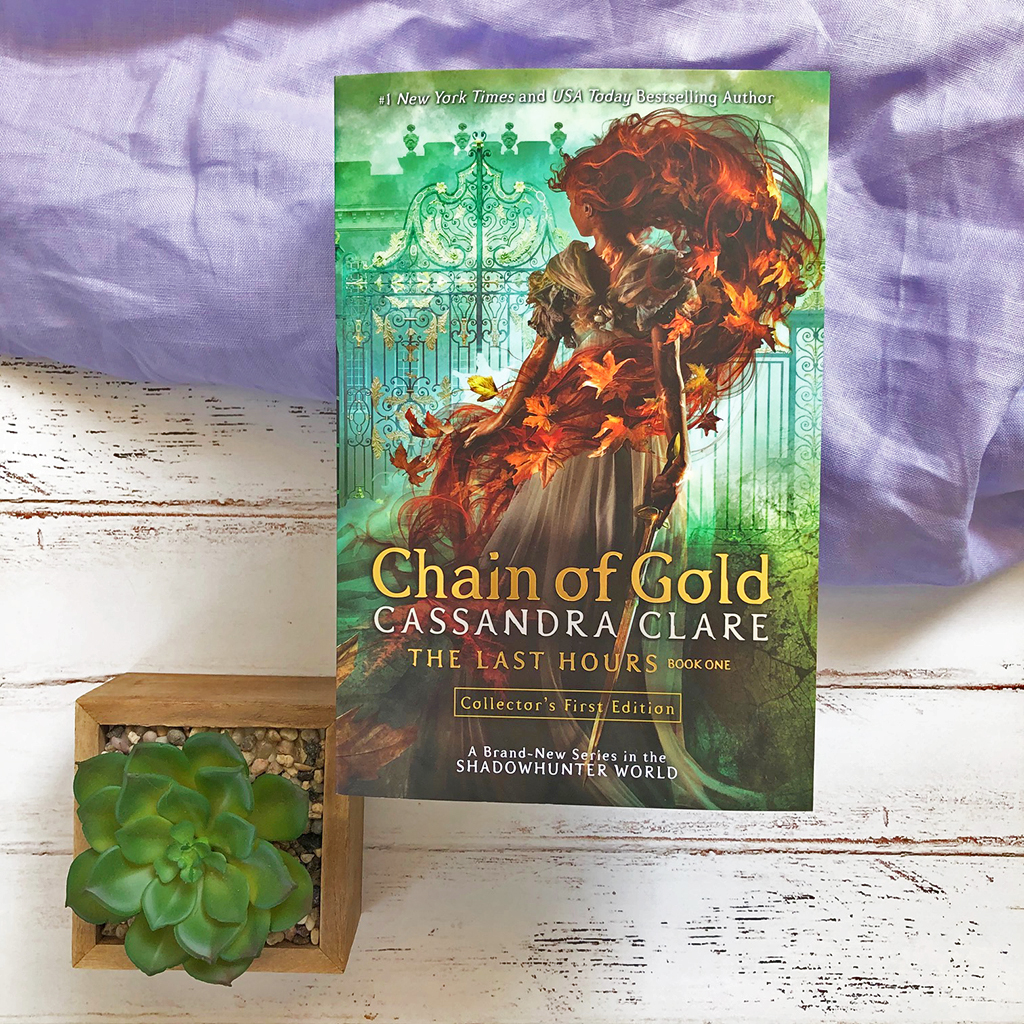 Cordelia Carstairs is a Shadowhunter, a warrior trained since childhood to battle demons. When her father is accused of a terrible crime, she and her brother travel to Edwardian London in hopes of preventing the family’s ruin.

Cordelia’s mother wants to marry her off, but Cordelia is determined to be a hero rather than a bride. Soon Cordelia encounters childhood friends James and Lucie Herondale and is drawn into their world of glittering ballrooms, secret assignations, and supernatural salons, where vampires and warlocks mingle with mermaids and magicians. All the while, she must hide her secret love for James, who is sworn to marry someone else. But Cordelia’s new life is blown apart when a shocking series of demon attacks devastate London.

Trapped in the city, Cordelia and her friends discover that a dark legacy has gifted them with incredible powers – and a brutal choice that will reveal the true cruel price of being a hero.

Chain of Gold by Cassandra Clare is the first instalment in The Last Hours trilogy, a new fantasy series for adult and young readers. Apparently, it’s a sequel to The Internal Devices trilogy, and a prequel to the Mortal Instruments series, but that doesn’t matter to me. I’ve only read one book from the Mortal Instruments series, and I know nothing about any of the other series. I went in blind to this (I imagine other readers will too).

Above all else, this book explores friendship, identity, legacy and love. There are many things in this book that readers will not be able to relate to — demon attacks, warlocks, ghosts etc — but the teenagers in this book experience things that all readers can understand. They go through love and heartbreak, heartache and deception, betrayal, and they uncover shock secrets from within their own family.

“Cordelia couldn’t understand why she was so worried about Lucie. Several withdrawing rooms had been opened up, and Lucie could have wandered off to any of those, or returned to her own bedroom. She really could be anywhere in the Institute.”

Set in the early 1900s, the book is approximately 600 pages. Does it need to be 600 pages? No it doesn’t. The pacing in the first half of the book is so slow, it’ll make you feel like you’re never going to get through it. It feels like a walking marathon. Once you pass the halfway mark and the demon attacks start ramping up, that’s when events start to get interesting.

Chain of Gold is told through the perspective of Cordelia, a brave, strong-willed Shadowhunter. She’s a complex character, but she’s also confident, self-assured and defiant to those who underestimate her. Over the course of the novel, the reader witnesses Cordelia at her best but also her most vulnerable.

Cassandra Clare has a way of capturing the entirety of a character, delving deep into their emotions and actions so the reader walks away feeling like they truly understood that protagonist.

“He looked away from Grace for the first time and searched the floor for Cordelia. He found her in moments — she was easy to spot. No one else had hair that colour, a deep dark red, like fire shining through blood.”

Chain of Gold features a large cast of core characters, and Cassandra takes the time to really illustrate them all (to be expected when the book is 600 pages). We come to understand motives, doubts, fears, and each character’s biggest desire. Sure, there are plenty of things left unsaid (this is a trilogy after all, we have two more books to go), but the ending to this book felt satisfactory. I’m intrigued to read the sequel.

Admittedly, there are so many teenagers and kids in this book it was easy to get confused about how they were related. Who were siblings? Who were just friends? Who were extended family? Sometimes it was easy to forget. Whilst the core characters were crafted with depth, sometimes it did feel like there were too many of them and perhaps…there didn’t need to be as many kids and teenagers?

“James had never seen the infirmary like this before. Of course he’d heard stories from his mother and father about the aftermath of the Clockwork War, the dead and the wounded, but during his lifetime there had rarely ever been more than one or two patients in the sickroom.”

Recommended for fans of fantasy fiction and young adult literature. 14+