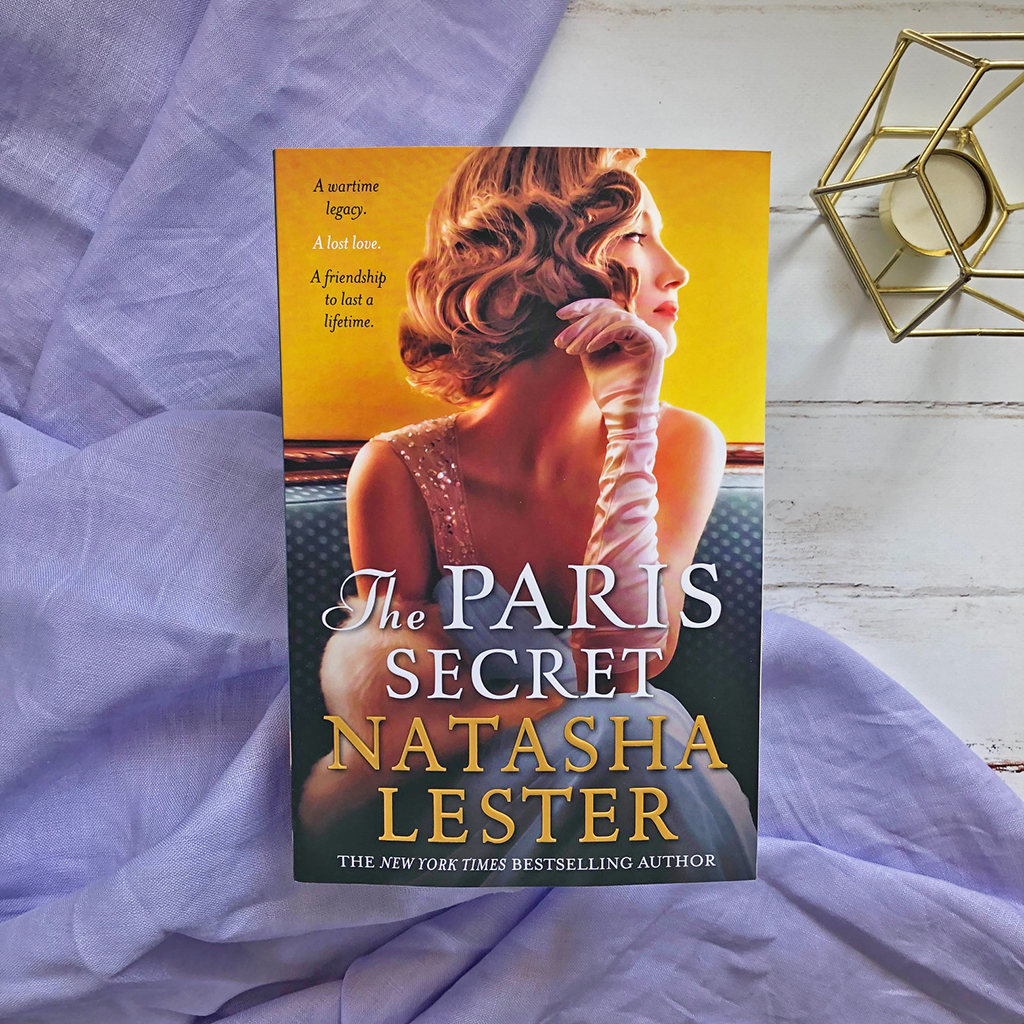 Paris, 1947 Designer Christian Dior unveils his extravagant first collection to a world weary of war and grief. He names his debut fragrance, Miss Dior, in tribute to his sister, Catherine, who worked for the French Resistance.

Present day Australian fashion conservator Kat Jourdan discovers a secret wardrobe filled with priceless Dior gowns in her grandmother’s vacant cottage. As she delves into the mystery, Kat begins to doubt everything she thought she knew about her beloved grandmother.

An unspeakable betrayal will entwine all of their fates.

The Paris Secret by Natasha Lester is another historical fiction novel mostly set during World War II, this time introducing us to three incredible women whose lives are forever changed and bound by secrets.

The dominant storyline is the one set in 1939, where we meet sisters Skye and Liberty Penrose, Skye’s childhood friend Nicholas Crawford, and his fiancé Margaux Jourdan. We do briefly move between two other storylines — 1947 where Margaux is a model for fashion designer Christian Dior, and present day 2012, where Margaux’s granddaughter Kate starts to uncover all of her grandmother’s secrets during World War II — but every time we’re transported back to 1939, Skye’s storyline maintains for almost 100 pages.

Natasha always crafts characters who are engaging and interesting, drawing the reader in with their depth and their likability. Normally, I wouldn’t think Air Transport Auxiliary would be interesting enough to want to read about it, but Natasha bring us a multi-layered core cast of characters, and you can’t help but feel swept up in the storyline.

“Tonight’s mission was named Operation Peaceful; some wag at HQ obviously had a sense of humour. The operation was a double: he and O’Farrell would each fly a Lysander carrying one SOE agent and six hundred pounds of cargo — Sten guns, money, radios, pamphlets — to a tiny field in France and land on a flare path just one hundred and fifty yards long and lit by only four pocket torches.”

Having read most of Natasha’s previous novels, I noticed a vast difference in how she captured Skye and Liberty’s backstory in this latest book. More time was given to their past and their childhood, so by the time the pacing picked up and we were in the middle of World War II, you felt more understanding of the characters. I definitely felt like more attention was given to the characters, allowing the reader a closer connection with them as the chapters progressed.

The writing is polished and tight, but also emotional and full of character. Natasha always writes such realistic dialogue, gorgeous prose, and she always illustrates fantastic female characters and really engrossing romances. Sitting at almost 450 pages, this is one of Natasha’s lengthier works but it’s worth every page.

“What she’d seen on Margaux’s face after the bloodlessness passed was a terror so stark Kat never wanted to see it again. If was as if her grandmother had witnessed death itself, as if the dark angel had reached for Margaux with outstretched arms.”

Personally, Skye’s story was my favourite. She’s intelligent, confident and ballsy, and she fights for what she believes in. She’s estranged from her sister Liberty, who is malicious, conniving and manipulative, and she’s in love with her childhood friend Nicholas Crawford. He happens to be engaged to the mysterious but bold Frenchwoman Margaux Jourdan, and Skye feels torn by her feelings for Nicholas.

All of them work together in Air Transport, supporting the RAF during the war. Skye was part of a small group of women who transported planes around the UK. It was a stressful, trying time, with a lot of pain, death, and uncertainty. Skye was a pioneer for women in the British Auxiliary, and so there’s definitely a lot of feminist undertones in the novel. Women weren’t considered to be as talented or as valuable as men, and Skye worked to change that. She paved the way for female pilots.

“A Dior gown so sensational would certainly be featured in any book on the fashion house, would have been displayed proudly by any museum, would be almost as well known as the Bar Suit. But, as far as Kat was aware, nobody knew anything of this beautiful blue dress. Why?”

Sometimes, it did feel like the 1947 storyline wasn’t quite a natural fit in the novel. It was the glue between 1939 and 2012, but it felt a bit forced into the plot. There certainly wasn’t that much time dedicated to that POV in the novel, but it was a way for granddaughter Kat Jourdan to discover her grandmother’s hidden secrets. I wonder if there was a way to just have 1939 and 2012.

Recommended for fans of historical fiction, romance, and sweeping family sagas that span across generations.