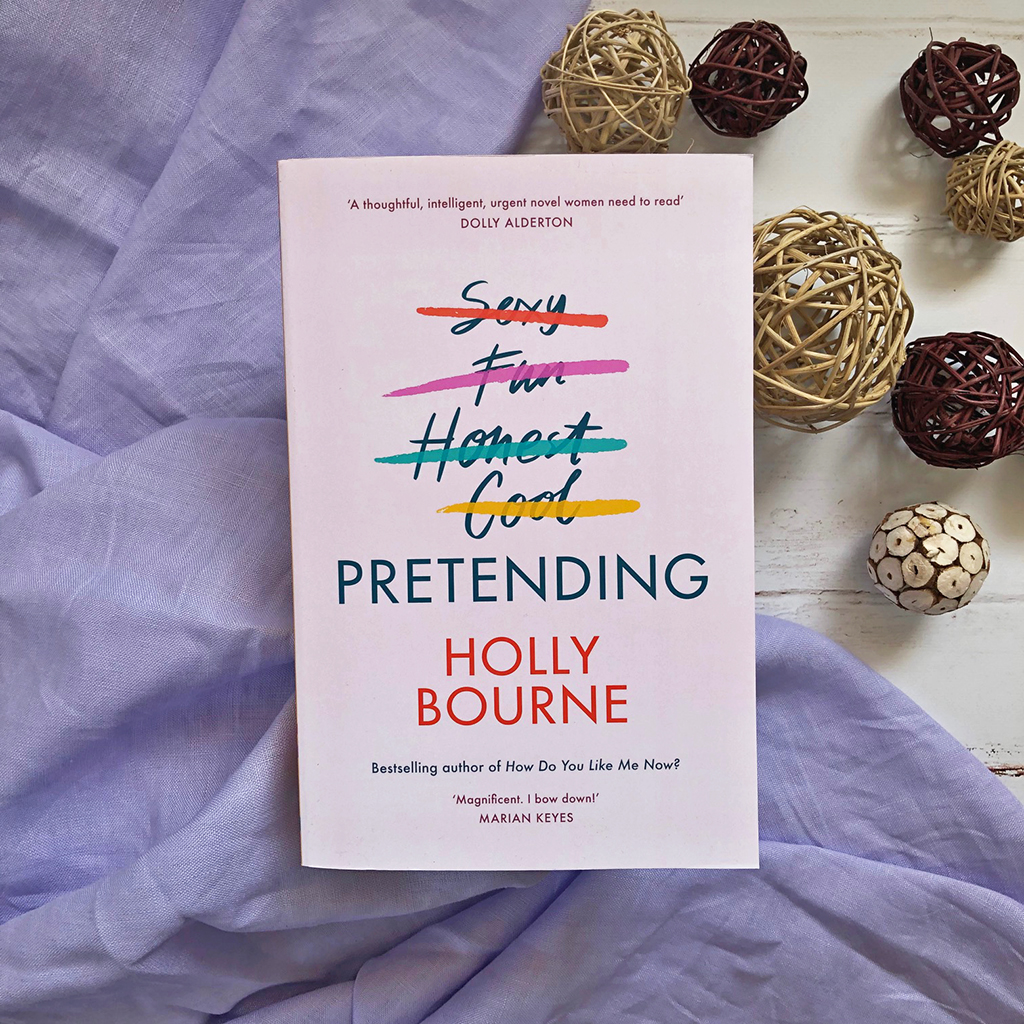 He said he was looking for a ‘partner in crime’ which everyone knows is shorthand for ‘a woman who isn’t real’.

April is kind, pretty, and relatively normal – yet she can’t seem to get past date five. Every time she thinks she’s found someone to trust, they reveal themselves to be awful, leaving her heartbroken. And angry.

Gretel is exactly what men want – she’s a Regular Everyday Manic Pixie Dream Girl Next Door With No Problems. The problem is, Gretel isn’t real. And April is now claiming to be her.

As soon as April starts ‘being’ Gretel, dating becomes much more fun – especially once she reels in the unsuspecting Joshua.

Finally, April is the one in control, but can she control her own feelings? And as she and Joshua grow closer, how long will she be able to keep pretending?

Holly Bourne’s Pretending is contemporary fiction about online dating and the risks you take when you pursue a new relationship with someone — the book explores themes of identity, self-worth, but also trauma and grief.

April struggles with who she has to ‘be’ in order for a guy to like her and want to progress past date number five. Being herself certainly isn’t working, so she takes on this fake ‘Gretel’ persona to see if new guy Joshua will last longer than the guys before him.

Pretending explores online dating for women, and illustrates the truth can be twisted when you meet someone digitally. There are certainly some heavy moments throughout the book, but Holly also weaves in a lot of humour and heart — Pretending is an emotional rollercoaster worth reading.

“Joshua wants me there at seven. So Gretel should turn up at around seven fifteen. I wonder if he wants us to have sex before, or after, dinner. I’d rather before, if I’m being honest with you. I still don’t understand how anyone can be in the mood with a full, swollen stomach digesting a hunk of beef or whatever it is he’s going to cook to impress me.”

Pretending explores sexual violence within relationships, and how boundaries can be blurred in the midst of a loving relationship. Boyfriends can cross a line when it comes to sex, leaving their girlfriend hurt and confused and unsure of what has happened.

Rape and the unprocessed trauma of sexual assault is a major thread in the book; I’m surprised how the blurb of the book completely hides this. April previously dated a guy who raped her twice, and she is still finding it difficult to process it. She didn’t realise it was sexual assault until some time after the incidents, and now she works at a charity organisation where she comes into contact with women all the time who have gone through the same thing she has and are incredibly confused about what they’ve experienced.

April feels like her role at the charity helps women who have experienced what she experienced, but at the same time, it means she is constantly reminded about what happened to her and she feels anxious and uneasy most of the time.

When April is with men, memories from those nights will come back to her and she finds it difficult to confide in other people about how she’s feeling. Under the surface, she has a lot of anger and rage about men that threatens to come to the surface at any moment.

This book may encourage female readers to acknowledge if they’ve ever had an experience like April’s that perhaps they haven’t really processed yet. It’s a really confronting experience, but moulded within a contemporary romance novel.

“What if revenge is good? Do we ever allow ourselves to ask that question? What if turning the other cheek is not the answer? Because I’ll tell you what. I’ve lived my whole life as a girl and I’ve turned so many goddamned cheeks I’m surprised I have any skin left on my face. And yet it’s never once made me feel better. Not like how I feel when I think about Gretel.”

April and her roommate Meghan have pretty solid characterisation — I feel like we’ve all known someone with their personalities in our lives. Their ‘voices’ are also incredibly different, and Holly is able to craft such vivid characters but also portray them to be completely seperate from one another.

April and Meghan are both vulnerable in different ways, and female readers will sympathise. Joshua doesn’t always feel believable or ‘real’ as a man on the dating scene, but he’s a welcome addition to the core cast of characters.

“We launch into mutually drunken conversation, becoming one of those pissed couples you see, standing outside a pub on a summer’s evening, leaning in a bit too much to hear what the other is saying. He asks me about my plans for the summer, and I say I’m saving up for Africa.”

Admittedly, the premise of the book is a little absurd and predictable. How is she going to weave her way out of this relationship when she’s been telling the guy a fake name? How will he explain it to his friends? How awkward is this entire situation!

Readers will find similarities in April — some more than others — but she can also be quite insufferable. She can be a bit tiresome and she doesn’t really think ahead. For example, she spends the majority of the book dating a guy who thinks she’s called Gretel. She invites him to be her +1 at a wedding, and naturally, it left me wondering how she could possibly go the entire evening without something calling her April and giving away her secret? Spoiler alert: many people call her April and her secret is ruined.

Additionally, I did find the book to be a bit ‘preachy’ at times. The messages in the book are already very clear, and I think readers will take a lot away from the story. But there were times where it felt like April was ‘teaching’ the reader and it wasn’t necessary. It made me feel like I was ‘supposed’ to feel a certain way, and I wanted to come to my own conclusions about the situation. I don’t think this is a book for reluctant readers.

Recommended for contemporary romance readers. At over 400 pages, it’s an unexpectedly emotional and heavy novel, but at its core it holds some really valuable messages for readers.