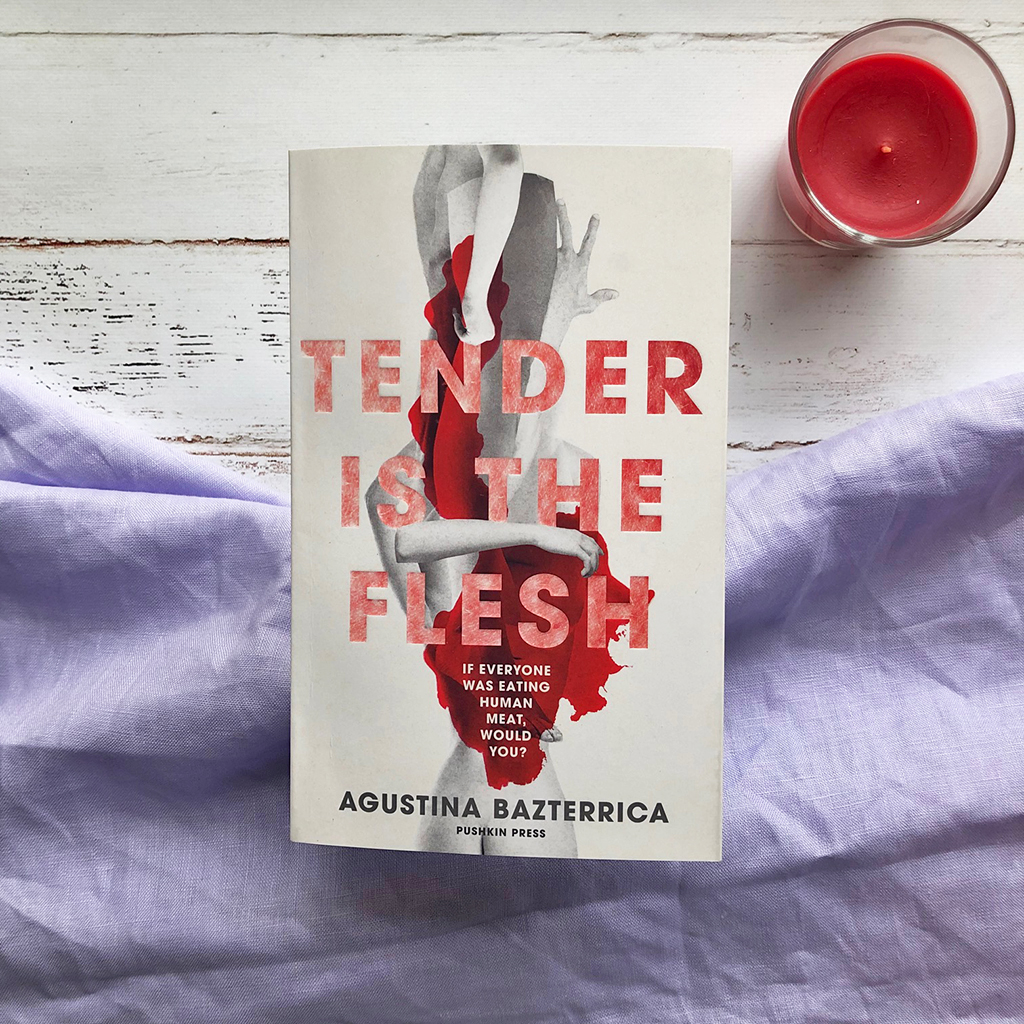 Working at the local processing plant, Marcos is in the business of slaughtering humans—though no one calls them that anymore. His wife has left him, his father is sinking into dementia, and Marcos tries not to think about how he makes a living. After all, it happened so quickly. First, it was reported that animals had been infected with a virus and their meat had become poisonous. Then governments initiated the Transition. Now, human meat—“special meat”—is legal. Marcos tries to stick to numbers, consignments, processing.

Then one day he’s given a gift: a specimen of the finest quality. He leaves her in his barn, tied up, a problem to be disposed of later. But she haunts Marcos. Her trembling body, her watchful, knowing eyes. Though he’s aware that any form of personal contact is forbidden on pain of death, little by little he starts to treat her like a human being. And soon, he becomes tortured by what has been lost—and what might still be saved.

Tender is the Flesh by Argentinian author Agustina Bazterrica is a dystopian horror novel set in a world where humans are being bred and harvested for food. Translated from Spanish by Sarah Moses, the novel explores what society would be like if animals couldn’t be eaten — a virus that is fatal to humans spreads through them all — and humans relied on cannibalism to survive.

This novel explores themes of consumption and greed, and how quickly we’re willing to sever our morals if it means feeling satiated. Tender is the Flesh explores a depressing response from humankind. The world is suffering, people are poor or hungry or neglected, but instead of helping others they do whatever they can to feel comfortable, happy, and content. And that’s to eat other humans.

Tender is the Flesh explores society’s priorities — what’s important to us? what would we fight for if animal meat was suddenly fatal? Would we adapt, and eat plant-based meals? Or would we kill others to continue our lifestyles?

The book is a short read — approx. 200 pages —and you feel ensnared in the story and intrigued by the plot progression. The intensity of this story is maintained throughout the entire novel; you can’t look away from what’s happening.

The setting is bleak. Marcos’ father is in a nursing home and requires a lot of care, he has a strained — and mostly forced — relationship with his insufferable sister, his son died from cot death, and he’s estranged from his wife. And his job is killing humans and preparing them to be eaten.

“He thinks this man is dangerous. Someone who wants to assassinate that badly is someone who’s unstable, who won’t take to the routine of killing, to the automatic and dispassionate act of slaughtering humans.”

Agustina must be commended on the pacing of the novel. The premise of the novel is intense and a little anxiety-inducing, and that never falters throughout the story.

The writing is spectacular. The prose is filled with imagery and metaphors that evoke a crystal clear story. The subject matter in the book may be filled with blood and horror, but the writing feels light, quick, and uplifting — a considerable irony.

There is a key stylistic element to this book that is worth noting — humans are not called humans or even people. They’re called ‘heads’ and they’re housed and transported in ways very similar to how cattle are treated today. Perhaps it’s to illustrate how de-sensitised we are to the killing of animals and how we don’t really take the time to think about what’s being killed and how they’re bred to be killed. And so when it’s humans, which should repulse or disgust the reader, the complete omission of the word ‘human’ or even ‘person’ clouds the image and makes the characters seem like the ‘meat’ we all know in the present.

“He explains that when the heads arrive, they’re given a spray wash and then examined. They need to fast, he adds, and are given a liquid diet to reduce intestinal content and lower the risk of contamination when they’re handled after slaughter.”

Tender is the Flesh delves deep into the meat industry, and how the killings occur. Trucks bring humans to Marcos’ factory, and it’s clear the poor and the marginalised have very little chance of surviving in this world. The rich have means to work and live without being eaten — the struggling do not.

There is an underlying political element to this book as well. The powerful decision-makers weave in and out of the story. They’re greedy, unfeeling, and treat the business of slaughtering humans as just that — business.

“El Gringo tells him that this female is a luxury, repeats that she’s got pure genes, as if he didn’t know it, and says that she’s from a consignment that’s been given almond-based feed for over a year now.”

At times, hard to stomach. Terrifying, gut-renching and chilling, Tender is the Flesh will entice and excite readers as much as it will repulse them. Recommended for adults, 18+