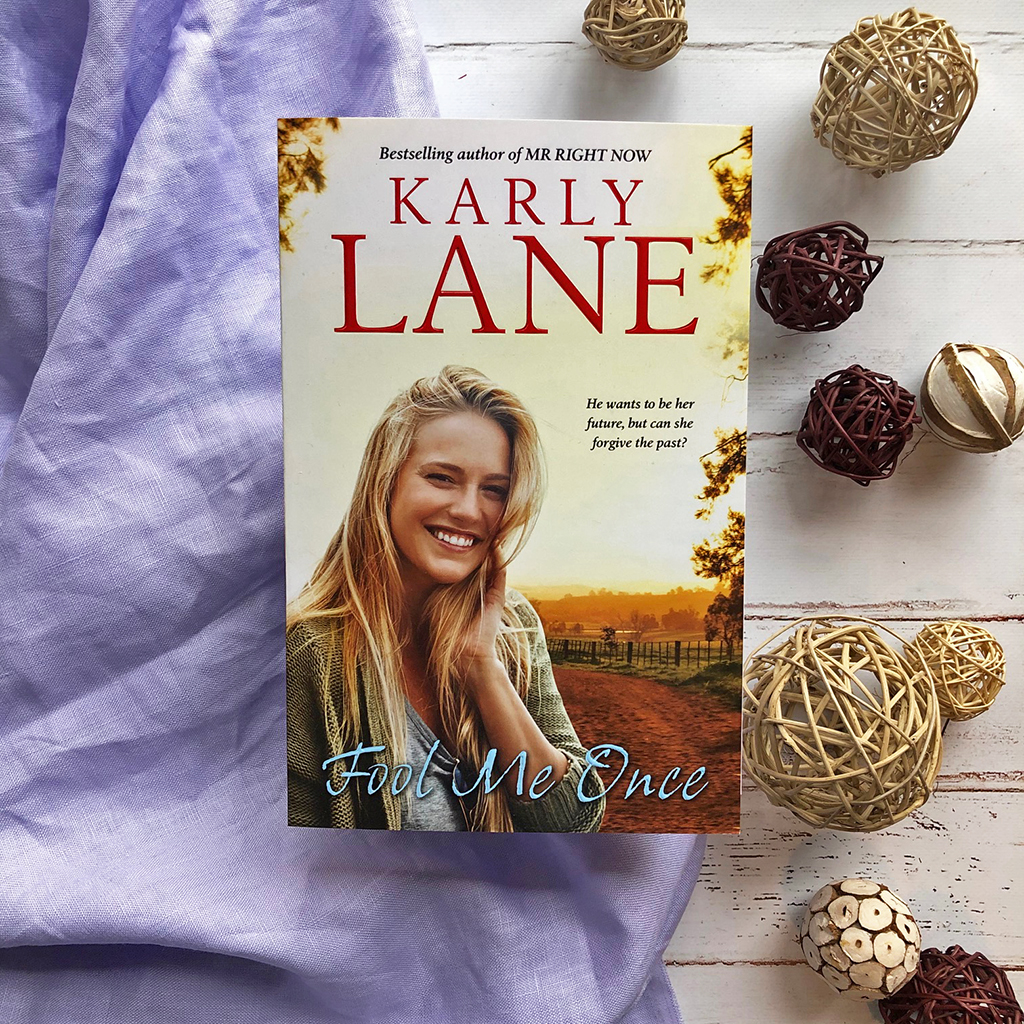 Farmer Georgie Henderson manages a cattle property in the New England region of New South Wales, but her dream has always been to buy back her family farm, Tamban.

When an unlikely meeting with Michael Delacourt at a rowdy B&S Ball sends them on a whirlwind romance, Georgie can’t believe it’s possible for life to be this good. For the first time ever, her dream of buying back Tamban takes a backseat to her happiness.

But her world shatters when she discovers the shocking secret Michael has been trying to keep from her.

Can Michael convince her they still have a future? And after having her heart so thoroughly broken, can Georgie ever trust anyone again?

Karly Lane’s Fool Me Once is rural romance fiction, set in remote New South Wales and exploring one woman’s journey to buy back her family farm.

At its core, Fool Me Once explores the concept of family and how that can be different for every person. Family is the father Georgie has lost, and who she desperately misses. Family is also her best friend Shannon, and her close bond with Harry and Matt, who she trusts and respects greatly.

Fool Me Once also showcases the importance of women in management roles (particularly within farming). Georgie is strong-willed and determined, and working to carve a career for herself in a male-dominated industry.

Rural romance has the ability to immerse you in another world, where communities rally together, loyalty within friendship and family are key, and the prospect of building a life on the land with someone else is exciting and enthralling.

“Georgie let out a long breath. How did he shake her carefully erected defences and common sense with just a look? She’d had her share of romances, but nothing serious and few that ever went anywhere other than the occasional movie or dinner.”

The setting will transport readers to the dusty, hot outback where lives are vastly different to our own. This is one of the biggest strengths in the novel, capturing the isolated and secluded Australian bush, but also illustrating that close bond that farmers share with their land and their select family & friends.

Georgie is relatable and readers will find sympathy in Georgie’s plight, and her determination to run a farm by herself and one day buy back her family farm.

Because its fiction, many romance fans will adore the methods that Michael goes to in order to win Georgie back, although personally I found him arrogant. He’s forceful at times, a little over-the-top with his emotions, and in real life I’m not sure how his actions would actually be received by a woman.

“He’d pondered what to do with the information for the past two days. The right thing would be to tell Georgie and get it out in the open. That’s what he’d decided to do, face to face, which was why he hadn’t waited until the weekend to come out.”

Stylistically, the book is written in third person but switches perspective between Georgie and Michael.

The intimate third person perspective allows us to see all sides of the story, and gain a deeper understanding for each character. We come to understand Georgie’s driven nature, her passion for the land, her vulnerability, and her gentle soul. We also witness Michael’s inner turmoil, his intense love for Georgie, and his determination to fix his past mistakes.

Fool Me Once demonstrates an appropriate balance between prose and dialogue, not bogging us down too much with exposition or description. Karly moves through some scenes at lightning speed, and it always felt appropriate for the story. The novel itself spans quite a long time period, and Karly manages the transition through time effortlessly.

“She smiled a sad smile and Georgie thought about the photos of the woman Harry used to have on the fireplace mantle. She hadn’t known Vera — she’d died more than thirty years ago — but she felt as though she had.”

Admittedly, as a first-time reader of Karly’s work, I found the story a little slow to start — the tension and pacing picked up as soon as Michael’s secret was out in the open, and since his secret is mentioned in the blurb I thought it could’ve been revealed a little earlier in the book to really propel us into the story sooner.

Additionally, the secret wedding in Hawaii felt a little unrealistic and unnecessary. Did it need to happen? If you take it out, the story could still function as the same. Michael still could’ve desperately tried to reunite with Georgie.

Seductive and satisfying, Fool Me Once is recommended for romance readers. There’s a lot of sex mentioned in the book — and deliberately corny pick-up lines — but I think young readers will also enjoy this. 16+

Fool Me Once
Karly Lane
May 2020
Allen & Unwin Book Publishers