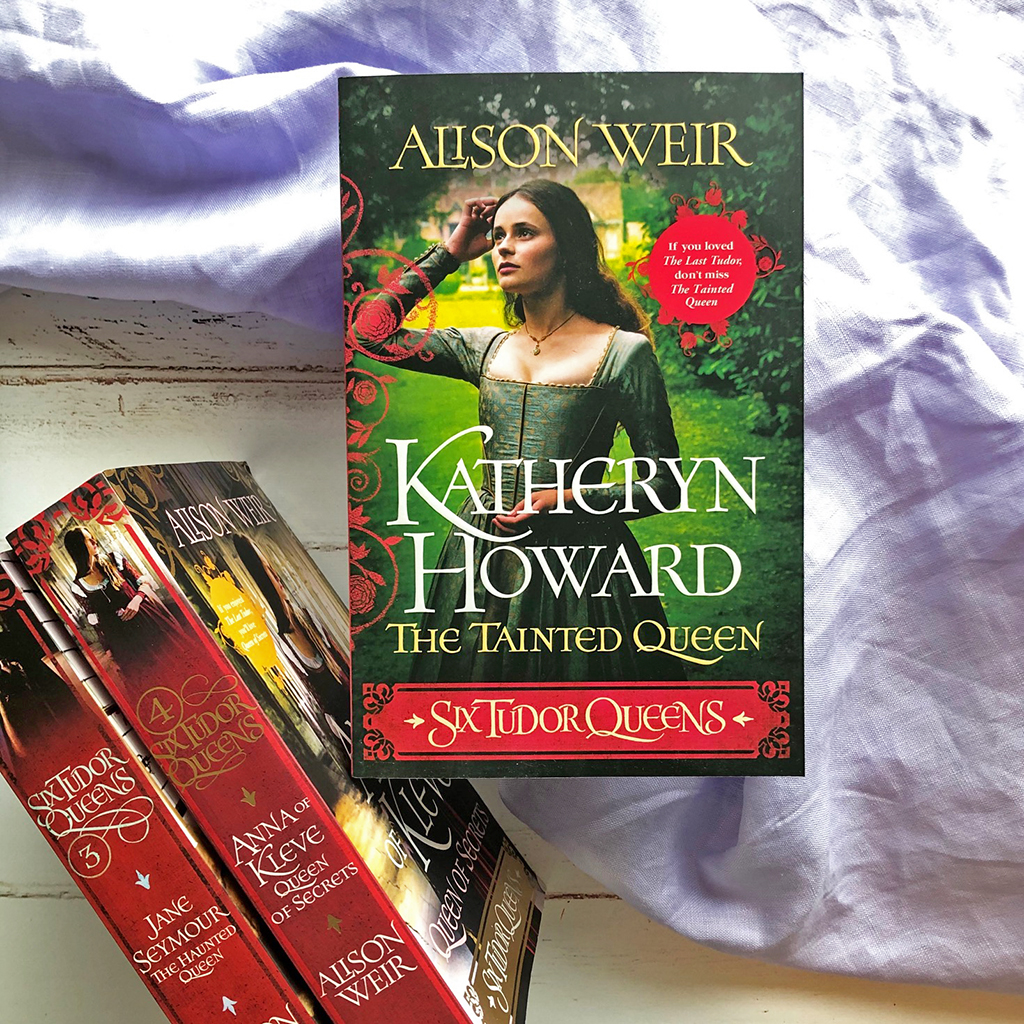 At just nineteen, Katheryn Howard is quick to trust and fall in love.

She comes to court. She sings, she dances. She captures the heart of the King.

Henry declares she is his rose without a thorn. But Katheryn has a past of which he knows nothing. It comes back increasingly to haunt her. For those who share her secrets are waiting in the shadows, whispering words of love… and blackmail.

My favourite series has returned for the year. Katheryn Howard: The Tainted Queen is the fifth novel in the Tudor Queens series by Alison Weir, well-known historian and author.

You can read my reviews of the other books HERE.

Written in intimate third person, Katheryn is portrayed as a naive, whimsical girl with no real thought to the consequences of her actions. She means well, but she’s quick to dismiss the possibility that her rather controversial actions will catch up with her in the years to follow.

“A maiden should be shamefast, she told herself, as she lay abed the next morning, thinking about the night before. Chastity is to be prized. But what was wrong with taking your pleasure where you found it? Why should she deny herself the delights she might know…”

The plot moves quickly, spanning close to twenty-one years in only a few hundred pages. Katheryn’s childhood is skimmed over, and most of the book focuses on her teenage years.

Katheryn’s actions are a reflection on her upbringing — her mother died when she was a little girl and whilst her gambling-addicted father remarried, he sent her away to be raised by relatives. Katheryn never really had a strong, maternal figure to guide her through her teenage years and so when she meets men she fancies, she makes foolish decisions that are difficult to keep hidden.

“After that, Tom seemed to be everywhere Katheryn went — in the gardens, at the tennis play, at the butts. Always, he was hovering. It was flattering to be the object of the attention of such a dashing gallant, and Katheryn was strongly attracted to him.”

I don’t feel like I could relate to Katheryn as much as the other wives, and I found her likability to be quite low. A couple of the other Queens were naive as well, but Katheryn felt particularly punishing at times. She was ignorant, wasn’t very educated, and had little interest in understanding what was happening around her. All of the Queens were flawed in some way, but Katheryn seemed to lack intelligence and maturity, and for that, she died. And when she died, so did those few around her that the King saw as complicit in her behaviour.

Poor Alison Weir had a difficult tasks trying to make this wife seem interesting! She was Queen at 19 and beheaded at 21, so you know it’s going to be one of the least interesting tales (Jane Seymour is probably a close second).

“It seemed that the future held nothing for her. It was not enough that she could still meet him in secret, for their trusts left her wanting and unbearably unsatisfied, and made her feel as naught in the world, as if this was all she could expect.”

As with the previous books in the series, the writing is heavy on description and internal dialogue. Towards the end of Katheryn’s life, the reader is shut out a lot because Katheryn herself didn’t know what was going on. She was locked away for months before her execution. This was an interesting stylistic technique to keep the reader guessing, and allowing the reader to understand how Katheryn must have felt.

I’m excited for 2021 to read the account of Henry’s sixth and final wife, Katherine Parr.

Recommended for fans of historical fiction. I recommended you start at the beginning of the series and make your way through each book — the books are all worth your investment. 14+