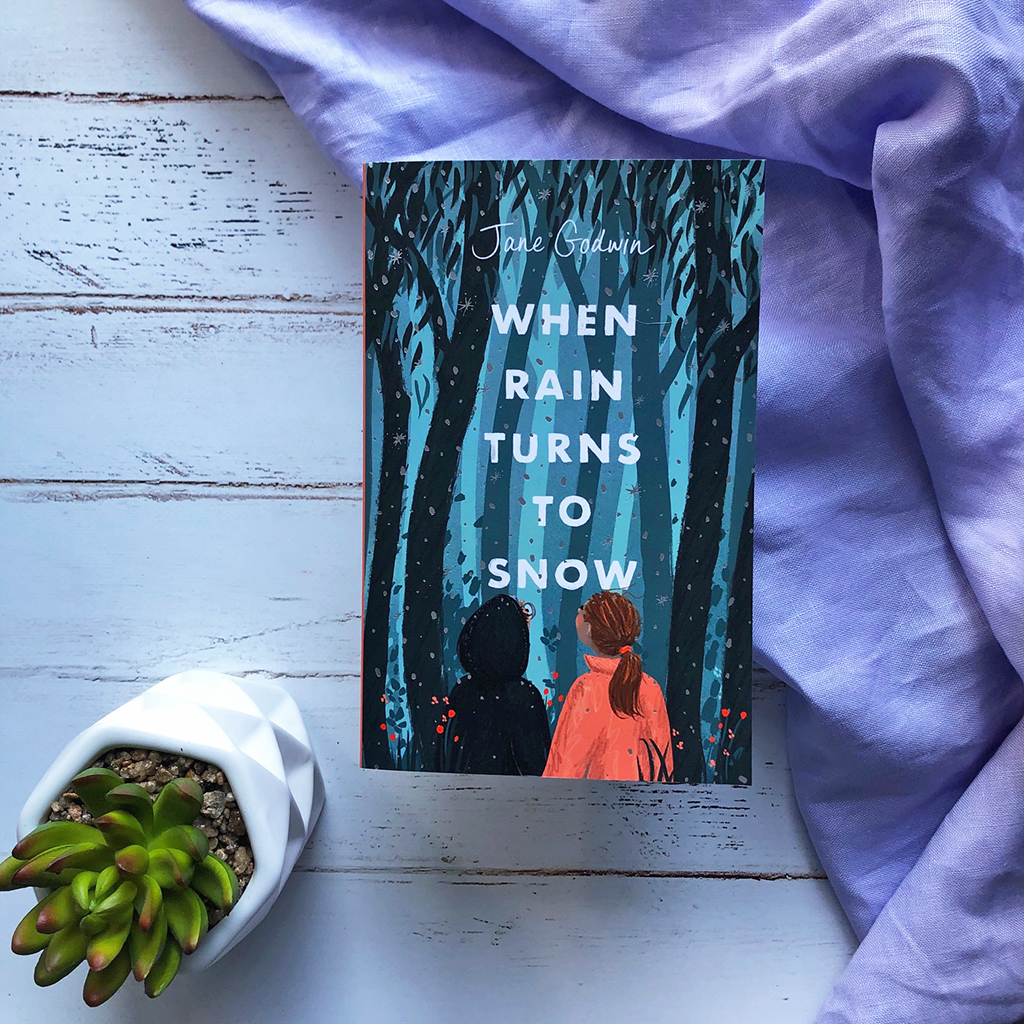 A runaway, a baby and a whole lot of questions…

Lissa is home on her own after school one afternoon when a stranger turns up on the doorstep carrying a baby. Reed is on the run – surely people are looking for him? He’s trying to find out who he really is and thinks Lissa’s mum might have some answers. But how could he be connected to Lissa’s family – and why has he been left in charge of a baby? A baby who is sick, and getting sicker …

Reed’s appearance stirs up untold histories in Lissa’s family, and suddenly she is having to make sense of her past in a way she would never have imagined. Meanwhile, her brother is dealing with a devastating secret of his own.

A beautiful and timely coming-of-age story about finding out who you are in the face of crisis and change.

When Rain Turns to Snow is an emotional coming-of-age children’s novel by Australian author Jane Godwin. It’s Winter in Ballarat and a young teenager named Reed turns up on Lissa’s doorstep with a hungry baby and a quest to find his biological mother.

13-year-old Lissa is headstrong and resourceful — she’s confident and she’s determined to uncover the truth. She doesn’t pander to the mean girls at school. She doesn’t believe what they’re saying about her brother. And her maturity means that she goes above and beyond to help Reed and this little baby, even though she has no obligation to.

“I open the door. He’s shivering, there are half-circle shadows under his eyes. Almost blue. The heavy bedraggled blanket over his shoulders. He steps into the back room, holding Mercy partly hidden in the blanket like a small nocturnal animal, the backpack half falling down his arm. His runners are wet, like sodden, they leave little puddles on the wooden floor.”

Friendship is a strong theme in the book. Lissa is trying to adapt to life without her best friend Hanna, who has just moved to Western Australia and seems to be growing distant. Additionally, she’s fallen into a new friendship group at school and Lissa isn’t sure if they actually have her best interests at heart. Toxic friendship is a universal issue that most teenage girls will be able to relate to, not just in Australia but anywhere in the world.

Readers will love the mystery that underpins the novel. Who is Reed and who are his real parents? What’s going to happen to baby Mercy? Lissa’s brother is closed off and hiding things from her, and she doesn’t know why they’re not as close anymore. And Lissa doesn’t seem to have any real friends at the moment…

“I don’t really understand that, and it actually made me feel sick, seeing people write that stuff about my brother. I mean, Harry can be a pain, but he’s not all the things that people who don’t even know him are saying.”

There were a few gripes I had with the story. The language didn’t always resemble a teenager. Sometimes, the dialogue felt forced — it felt like the characters were saying what they should say instead of what they’d actually say in the moment. Lissa seemed wise beyond her years, Reed’s passion for climate change and the environment seemed over-the-top preachy, and not at all reflective of his age.

Additionally, Lissa’s relationship with her brother grows problematic at certain points of the novel. Her brother is accused of starting an online social media account and posting pictures of vulnerable young girls. Lissa believes he’s innocent and feels sorry for him, and on a couple of occasions Lissa communicates that she intends to support him and stick by him even if he did do the horrible things he’s accused of. I found Lissa to be quite unlikeable during these scenes.

Lastly, one of the characters seems to be grappling with their sexuality and seems to be hiding the fact they’re gay. But this storyline is never fully explored in the book so it felt very strange that the author hinted at it? Why weave it in if you’re not going to address it?

“We sit there in silence. We both know that sooner or later we’re going to get around to the topic of Reed going home. I feel tired now, too. Exhausted. I look towards Harry’s room.“