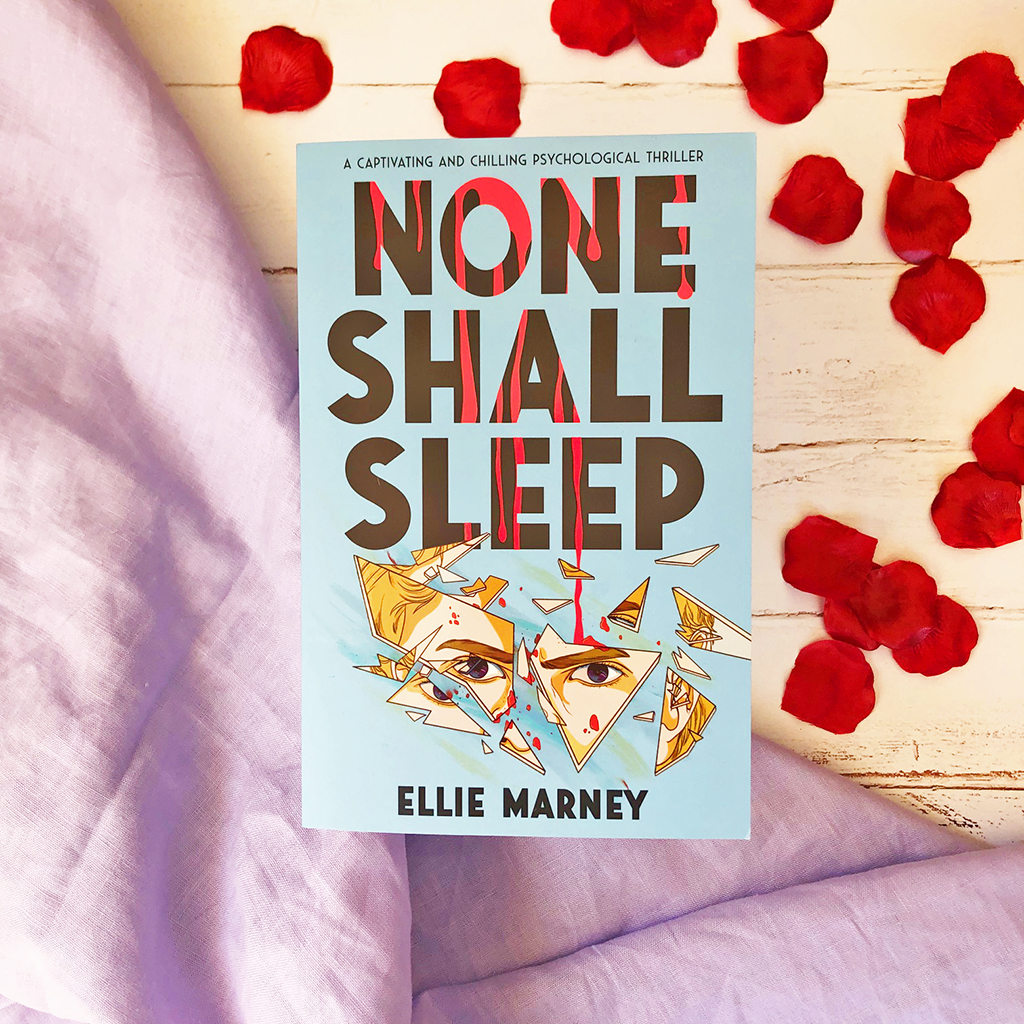 When they’re drawn into an active case targeting teenagers, everything starts to unravel. Over Travis’s objections, Emma becomes the conduit between the FBI and an incarcerated serial killer, nineteen-year-old Simon Gutmunsson, who is a super-intelligent sociopath. And although Simon seems to be giving them the information they need to save lives, he’s also an expert manipulator playing a very long game …

Can Emma and Travis stop a serial killer on the loose – or will they fall victim themselves?

In Ellie Marney’s latest YA crime None Shall Sleep, two 18-year-olds in the US find themselves interviewing juvenile killers for the FBI — soon, they’re on the hunt for a vicious and fast-moving serial killer, who targets teenagers.

I’ve read a few of Ellie’s books and this is by far my favourite, and the strongest writing I’ve seen from Ellie. The prose is sharp and blunt; Ellie only uses words she needs to, propelling us through the story with efficiency.

The premise is a little absurd, sure, but it’s easy to put that aside and just let yourself fall into this thriller. I’m a sucker for a good crime story and Ellie kept me guessing with each chapter. All my predictions were wrong — all my guesses were misguided. Readers will find themselves engrossed in the story, desperate to turn each page.

“The inside of Behavioural Science is all low ceilings, crummy carpet, and cubicle hallways. Not as impressive as he imagined. Bell hears the sound of someone hanging up a phone farther ahead, then a muffled question, answered by an unfamiliar voice.”

Both Emma and Travis have troubled pasts that they avoid speaking about. Emma was kidnapped two and a half years earlier by a serial killer, but managed to escape. She still carries the scars — physically and mentally. Travis’ dad was murdered by a serial killer, and when that same serial killer crosses their path, Travis struggles to process the events.

Somehow, just somehow, I managed to read this entire book without realising it was set in 1982. I’d read the blurb multiple times and somehow missed it, and then I read the book and assumed it was set in the present. And to be honest? It works in the present. I mean, the premise is all a little ridiculous and unbelievable, which is probably why it’s not set in the present, but there didn’t really feel like any key descriptors or atmospheric indication that this was the 80s.

I think it’s both a good and bad thing. Good, because if it was too heavily embedded in 80s culture/landscape, teenagers today might not have enough of an interest in that to keep reading. And perhaps bad because…isn’t it a little weird you can read a whole book set in the 1980s and not realise? Ellie probably could’ve captured the setting a little stronger, without alienating her young readers.

“Kristin Gutmunsson’s resemblance to her twin is striking. She has the same gifts of good breeding, the poise and length of bone. She’s barefoot, in a simple cream linen shift that likely cost about as much as a small car. Her hair is ice-white and hands down in long tassels that remind Emma of Spanish moss — which makes her thinks of chiggers.”

It’s clear that a lot of research has gone into the writing of this book — the technicalities around the cognitive behavioural strategies, the descriptions of the killings and the crime scenes, the PTSD that Emma suffers from. Ellie has crafted a multi-layered story that sucks you deep into its clutches with each passing chapter.

Notorious serial killer Simon Gutmunsson plays a large role in this book, which I loved. He’s a fearsome character — he terrifies the reader with his quiet demeanour, his careful and considered actions. His characterisation is flawless, his dialogue chilling. He is both charming and intimidating, you can’t help but fall in love with him even though he’s a cold-blooded and remorseless killer. Readers will sympathise with his one weak spot — his love and devotion to his sister. It’s important to give antagonists something in their personality that makes them relatable, it allows the reader to understand them a bit better and perhaps like them. Simon’s connection with his twin sister Kristin makes him relatable, well-rounded, three-dimensional, and even that bit more human. It also allows for a few tender moments within the story.

“Cooper navigates the roads towards the Capitol Building, and Bell’s eyes move over the scrawl of Emma’s handwriting. She’s taken the entire interview down like dictation, and Bell finds the part he’s reading disturbing.”

As a long-time fan of Criminal Minds, I absolutely loved this book. I was genuinely shocked at how obsessed I became with this novel — how quickly I ditched plans just so I could finish this. The chapters snap at your heels, demanding you to keep reading, daring you to venture further.

Chilling and disturbing, but also really fucking entertaining. Recommended for readers of all ages.