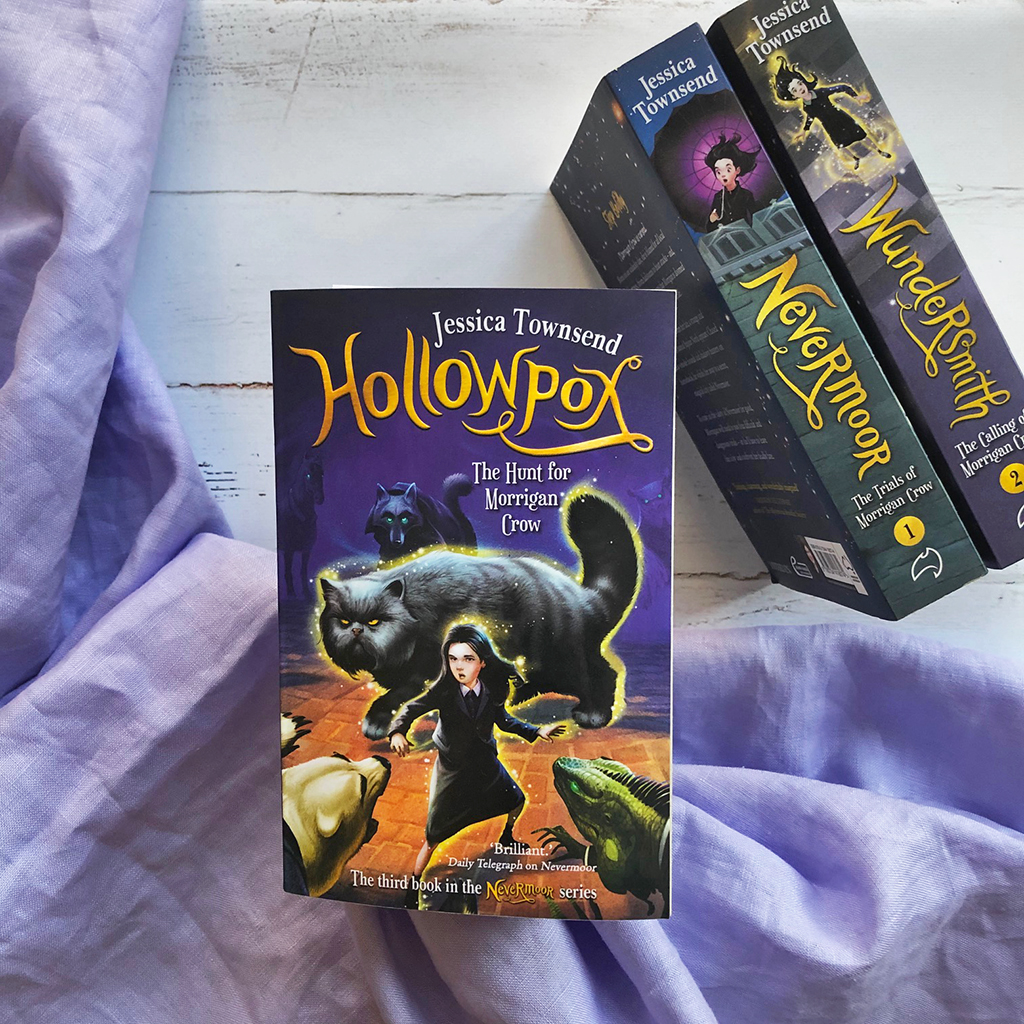 Strange things are happening in Nevermoor…

Morrigan Crow faces her most dangerous challenge yet in her latest Wundrous adventure. The highly anticipated third book in the award-winning Nevermoor series from one of Australia’s best selling and most loved authors.

Morrigan Crow and her friends have survived their first year as proud scholars of the elite Wundrous Society, helped bring down the nefarious Ghastly Market, and proven themselves loyal to Unit 919. Now Morrigan faces a new, exciting challenge: to master the mysterious Wretched Arts of the Accomplished Wundersmith, and control the power that threatens to consume her.

But a strange illness has taken hold of Nevermoor, turning its peaceable Wunimals into mindless, vicious unnimals on the hunt. As victims of the Hollowpox multiply, panic spreads. And with the city she loves in a state of fear, Morrigan quickly realises it is up to her to find a cure for the Hollowpox, even if it will put her – and the rest of Nevermoor – in more danger than ever before . . .

The third book in Jessica Townsend’s Nevermoor series, Hollowpox: The Hunt for Morrigan Crow is a highly anticipated read for children and adults alike.

When Morrigan and her friends return to The Wundrous Society, a devastating illness starts spreading through Nevermoor. No one knows where it came from, how it’s spreading so fast, or how to cure it. And every passing week, it’s claiming more and more victims…the plot feels eerily similar to the state of the world right now, that’s for sure.

“Today, though, they’d mostly been Jupiter-watching — partly for entertainment, and partly out of a genuine concern for his safety. He’d gone a bit mad on tinsel, carols and eggnog, and Jack was worried that his uncle’s Christmas spirit had risen to such dizzying heights that he just might…burst a valve, or something.”

The strengths in the book are similar to what I loved in the previous books — the quirky and loveable Jupiter North, the hilarious banter between Morrigan’s friends (but hardly ever Morrigan – she’s not a very funny character), and the unique world that is Nevermoor.

Morrigan is just as determined and independent in book three as she was in the previous two reads. Like a lot of children’s novels, she’s surrounded by adults who don’t seem to be overly transparent. She has insight into the dreaded Hollowpox but no one will listen to her, and she just wants to help. Morrigan takes it upon herself to uncover the truth about the illness, and work to stop it before it claims too many unsuspecting victims.

“One by one the group members were called on and ran eagerly to the front, where they showed off an eclectic, extraordinary range of skills. One plucked a shadow from the wall and draped himself in it like a cape of darkness. Another made a collection of three-dimensional, glowing, brightly coloured shapes seemingly from nothing, and sent them dancing through the air in formation.”

Admittedly, Hollowpox has me conflicted. On the one hand, it’s quick and witty, fun and energetic, with the same cast of familiar characters we’ve loved since book one. On the other hand, the plot in this book seems fairly slow and, I’ll dare admit, a little boring.

It felt like quite some time before the dreaded Hollowpox thread started weaving its way into the story, and even when it dominated the novel, I never really felt like it was as enthralling as I anticipated. Most of the characters infected with Hollowpox were characters we weren’t that close to, so I didn’t feel much of an emotional investment in their sudden ailment.

The plot also felt a little over the place. We weave in and out of the illness so much that the stakes didn’t feel heightened enough. Plus, a significant element of the book is Morrigan developing her powers but at quite a slow rate, so the magical and mythical elements feel a little diluted by the end.

Truthfully, I felt like Hollowpox fell flat compared with its two predecessors.

“A Red Alert Tricksy Lane meant high-danger trickery and likelihood of damage to person on entry. Morrigan had to make a choice: risk unknown danger down a Tricksy Lane, or the absolute certain danger that when her body tired out, she would be mauled by a vicious nine-foot bearwun with claws the size of pocketknives.”

I’m still going to keep reading the series. I’ve already read these first three books and I believe in the world that Jessica Townsend has created. Just hoping the plot of the next book is a little more enrapturing.