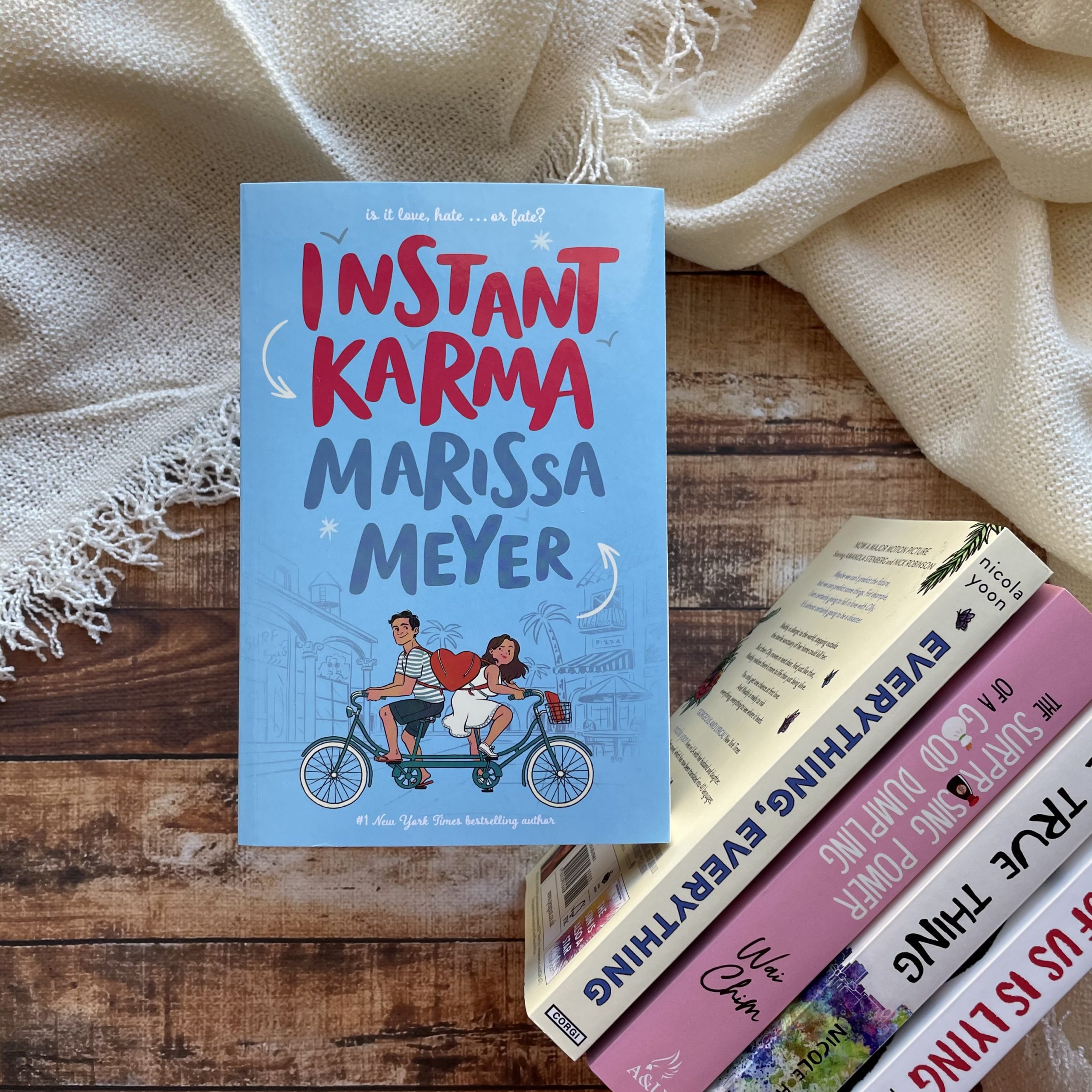 Chronic overachiever Prudence Daniels is always quick to cast judgement on the residents of her coastal town. Her dreams of karmic justice are fulfilled when, after a night out with her friends, she wakes up with the sudden ability to cast instant karma on those around her.

Pru giddily makes use of the power, flexing it on everyone from public vandals to karaoke hecklers. But there is one person on whom her powers consistently backfire: Quint Erickson, her slacker of a lab partner and all-round mortal enemy.

Soon, Pru begins to uncover truths about Quint, her peers and even herself. She discovers how thin the line is between virtue and vanity, generosity and greed . . . love and hate.

Marissa Meyer’s Instant Karma is a rom-com YA novel about the perception of others, how quick we are to cast judgement, and the importance of understanding how multi-layered justice is.

An outing with her friends results in Prudence developing supernatural powers, allowing her to wreak karma on those she thinks deserves it. It feels like the perfect punishment for her lazy, sloppy lab partner, Quint Erickson. Until she starts volunteering at the local sea animal rehabilitation centre and learns there’s more to Quint than she thought.

Teenage readers will enjoy this novel — the setting, characters, and direction. Admittedly, this book doesn’t really feel like it’s about karma at all. It’s actually quite an insignificant part of the story, feels a little like the author jammed it in post-first-draft. There certainly doesn’t feel like there’s a resolution to it.

However, readers will appreciate the lessons that uptight, goody-two-shoes Prudence learns along her journey. In the beginning, she’s borderline insufferable. By the end, she’s quite an engaging protagonist.

“It’s not that deep, but when she lands on her backside with a splash, the water comes nearly to her neck. She scrambles to her feet and bolts from the water, her dress coated in sand and clinging to her thighs.”

Setting feels like its own character in this novel. The Southern California beach is the perfect backdrop to this setting — it offers a light, fun, carefree story. This is the perfect summer read, an ideal book to take to the beach or by the pool. A real resort read.

There are some important issues and themes to digest in the book — nurturing animals, wildlife rescue and rehabilitation, littering, the environment — but Marissa presents them in a manner that doesn’t feel overbearing or preachy. Ideally, the reader must possess some kind of interest or affection for animals, or they might find themselves a little bored. The opening of the book is certainly a little slow to start, because it’s dominated by a biology project that is a little snoozy.

I loved that Pru was confident, dominant, sure of herself, but I also really appreciated it when Quint put her in her place — when he pointed out when she was being unreasonable. When her perfectionist tendencies were putting unrealistic pressure on those around her, it was important for that to be checked.

Despite Quint feeling a bit one-dimensional and not overly layered, he was relatable in those moments, and it was important for Prudence to be put in her place so she could learn from her mistakes and grow as a character.

“How is it that I can have such high expectations, for myself and those around me, while Quint can be so…so Quint. I’ve even spent the last year lowering my expectations for him, bit by bit, and still he manages to disappoint. I’ve truly asked so little of him.”

A little predictable, but highly recommended for teenage readers, perhaps even 10+ depending on the individual.