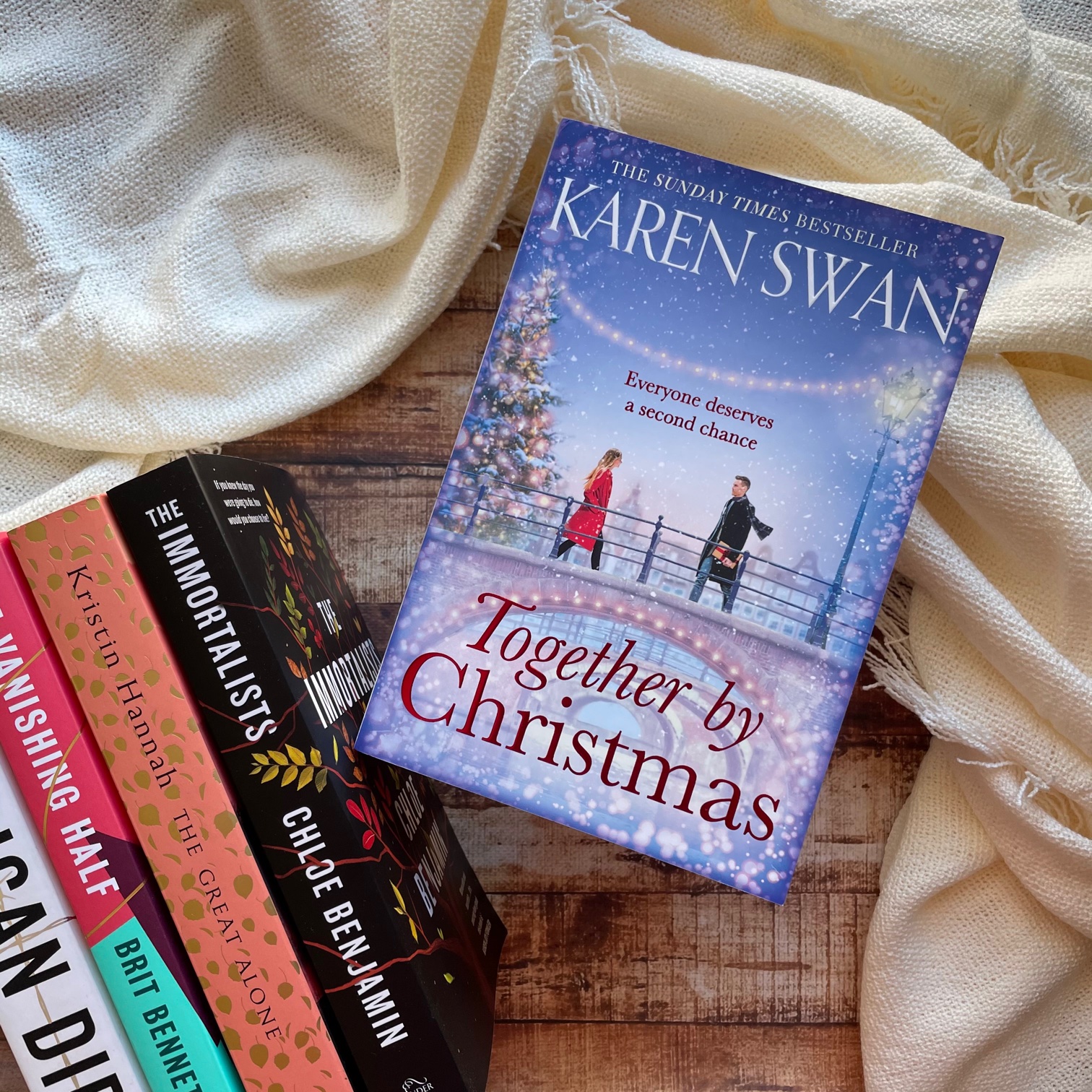 When Lee first came to Amsterdam, it was with a newborn baby and a secret. Five years later, her life is approaching normal: her career as a celebrity photographer is flourishing, her son Jasper is growing up, and they are enjoying the run-up to Christmas with their tight circle of close friends.

But all this changes one morning when Lee finds a book in the basket of her bicycle – and scrawled inside it, a desperate message. Who left it for her, and why? Lee feels compelled to help and tracks down the book’s author, Sam. With an instant, undeniable connection it seems they might have a shot at a real future together.

Until her past comes calling. As the snow falls and ice thickens on the city’s canals, the secret Lee has never told resurfaces. Suddenly everything she holds dear hangs in the balance. Christmas is a time for being together – but what if the truth means she ends up alone?

Together by Christmas is Karen Swan’s latest festive read, this time predominantly set in the brisk cold winter of Amsterdam, and following a guarded and reserved photographer with a hidden past.

Lee used to be a Pulitzer prize-winning war photographer, but now she photographs for magazines and editorial articles — her life is a far cry from what it used to be, and there’s a lot of pain she’s been hiding from.

Together by Christmas definitely deals with much heavier themes, compared with Karen’s recent novels. A female photographer working in Syria and Turkey means there’s heightened danger for that character, and Lee’s involvement in the Middle East certainly accounts for her inability to form relationships. She’s suffering from PTSD and is a bit of a loner, only spending time with her son and colleagues — she struggles to date, or form romantic connections with men. Slowly, over the course of the novel, we find out why.

“She might have expected many reactions to her behaviour yesterday, but tenderness hadn’t been one of them. The ground kept moving beneath their feet and she never quite knew where things were between them.”

Stylistically, this novel is much like Karen’s previous works. Written in third person, Karen always includes a lot of exposition and internal monologue within her chapters — this may not be for everyone, but I always enjoy it. I feel it gives the characters more depth, and the reader gets more insight into their characterisation.

Except for the novel being set at Christmas time, it’s doesn’t really feel like a Christmas read. Although there are some messages in the novel that resonate with this time of year — being with family is more important than being alone, Christmas is more than just gifts, it’s important to reach out to those who are alone or struggling, and the importance of making amends and processing trauma is also a key takeaway in the book.

“She sat there for several moments more, trying to still her wildly beating heart, knowing she couldn’t stay out here, knowing she had to go back in there and eat with all those guests.”

I love Karen’s novels, but this was the first time where I felt like the elements in the story didn’t really gel together — Lee and Harry’s backstory in Syria, Lee’s job in present day Amsterdam, Sam, his family’s particular sporting obsession, Harry’s new wife, the mysterious couple that lives next door, the note in the basket. Truthfully, it took me quite a while to make my way through this book.

I’m normally drawn in by the romance in these novels but the story of Lee and Sam seemed drowned out by an array of other plot points. Was there too much happening? Perhaps. Karen talks in the author’s note about how she struggled with this book in particular, and the plot, and I felt like that was quite evident when I was making my way through the story.

I wonder if the sub-plot about Sam’s family — which I think was put in there to create some tension between them, and the need for a fight and subsequent reconciliation — could’ve been removed to allow for a more streamlined story. And also the storyline about the neighbours felt a bit crammed in, only really relevant right at the end of the book. I’m not sure it was as seamless as it could’ve been

“For several long seconds, they stood there, eyes locked, feeling the energy flow between them. Then she stood on tiptoe and kissed him again, once, twice, feeling his lips respond, his barriers weakening, chivalry collapsing…”