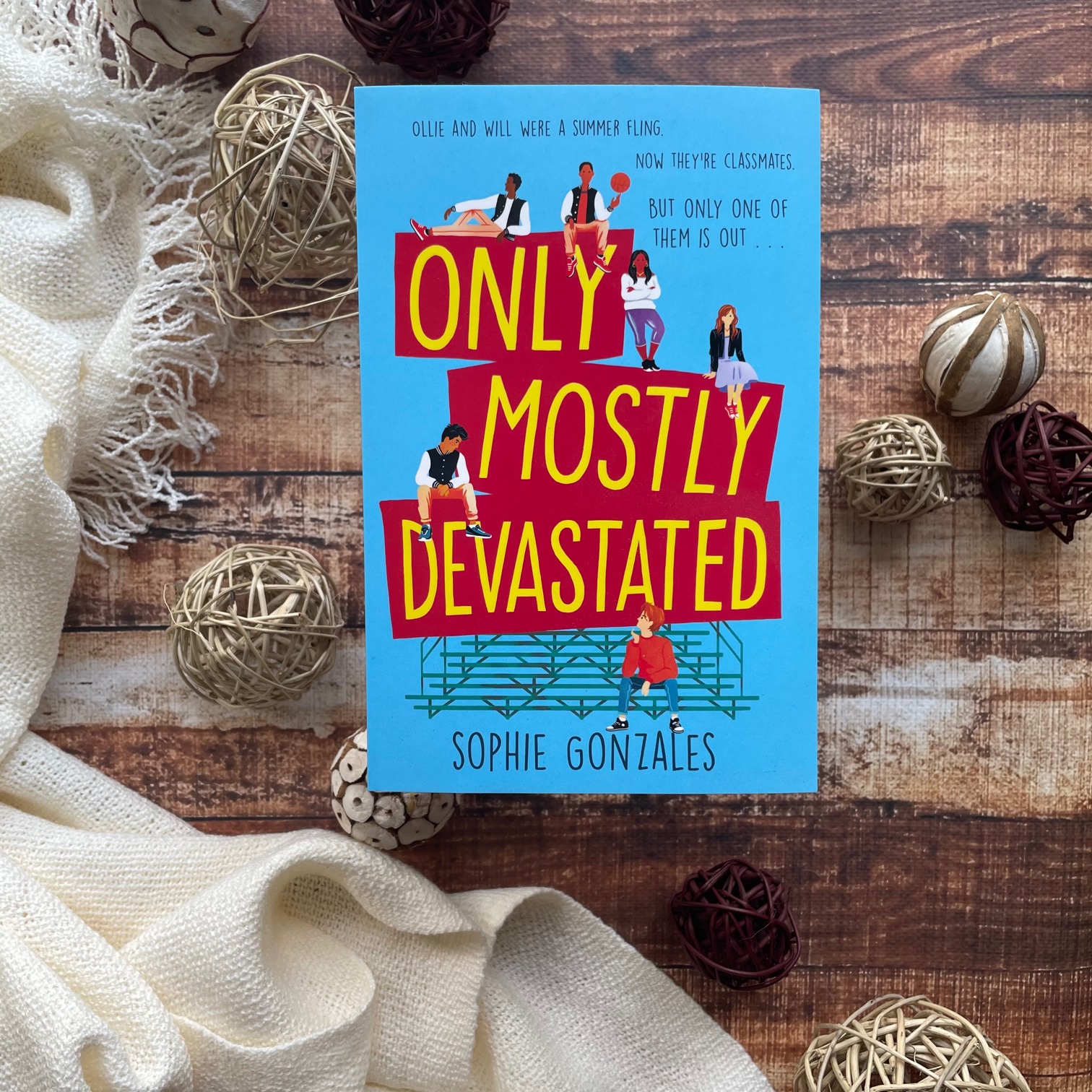 When Ollie meets Will over the summer break, he thinks he’s found his Happily Ever After. But once summer’s ended, Will stops texting him back, and Ollie finds himself short of his fairy-tale ending.

A family emergency sees Ollie uprooted and enrolled at a new school across the country – Will’s school – and Ollie finds that the sweet, affectionate and comfortably queer guy he knew from summer isn’t the same one attending Collinswood High. This Will is a class clown, a basketball jock and, well, a bit of a jerk.

The last time Ollie gave Will his heart, Will handed it back to him trampled and battered. Ollie would be a fool to trust him with it again. Right?

Heartfelt and uplifting, Only Mostly Devastated by Sophie Gonzales has been a surprise favourite for me these Christmas holidays. While I catch up on all the 2020 releases I’ve been meaning to read, I stumbled upon this YA romance novel and completely fell in love with it. Absorbed in the characters and the setting, I read this entire story in one day.

Ollie meets the gorgeous Will over summer break and the two fall in love. But then the holiday ends and Will won’t respond to Ollie’s texts. When Ollie’s family moves across the country to North Carolina and suddenly, the two boys are attending high school together, their secret summer fling is the least of their concerns. A modern day retelling of Grease, and just as charming.

“A familiar voice to my right made me start. Will. Of course it was. I couldn’t have five minutes’ reprieve from this absolute bad joke of a day, huh? He must be near the front door, from the sound of his voice. I couldn’t let him see me here alone. No way.”

A coming-of-age gay romance for the masses, strengths include the dialogue — snappy, witty and really quite hilarious. This is a novel that will attract and hold all audiences, not just teen readers. The characters are diverse and inclusive, and will appeal to LGBTQI+ audiences. Whilst set in the United States, all readers will recognise the high school environment and the complications that arise when love is involved.

The supporting cast of characters are just as rich and three-dimensional as Will and Ollie. The three girls that Ollie befriends, in particular, are a welcome addition to the story and are incredibly relatable. Ollie’s unwell Aunt also adds layers to the story — her place in Ollie’s life makes for an emotional read.

Heartfelt scenes between Will and Ollie will force readers to empathise with their plight. Ollie has already come out to family and friends, whereas Will has not. The novel is as much about their own journeys as gay men, as it is about their future as a couple.

“The conversation went on around me. I didn’t join in. It wasn’t super unusual for me to be quiet at lunch, and there was no way I felt comfortable enough to speak up with this audience. The weird thing was that Will didn’t speak, either.”

Only Mostly Devastated shows us what it’s like to live unapologetically, to follow your heart and chase what makes you happy. But the novel also illustrates the importance of only accepting what you deserve — Will struggles to come out about his sexuality, and his anxiety and inner torment means he doesn’t always treat Ollie respectfully, and it’s refreshing to see Ollie’s reaction to that. I’m sure many readers will find comfort in how their relationship changes and develops over the course of the novel.

“If it had come from someone else I might’ve been offended by that, but this girl had a way of half-smiling that made me feel like I was in on a joke with her. I decided I liked her.”